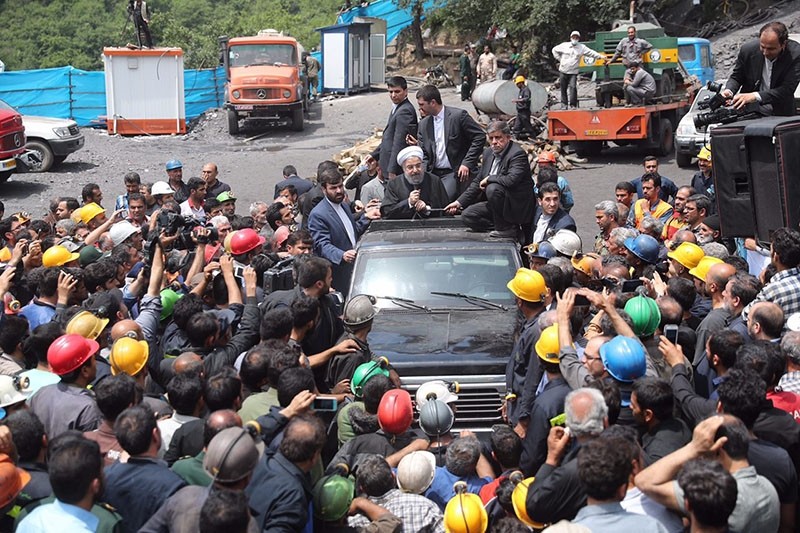 A handout picture provided by the office of Iranian President Hassan Rouhani on May 7, 2017 shows him (C) sitting through the roof of a car, visiting and speaking with coal miners and rescue workers in Azadshahr, in northern Iran. (AFP Photo)
by May 07, 2017 12:00 am

Iran's President Hassan Rouhani faced furious protests from victims' families on Sunday when he visited the site of a mine accident that claimed dozens of lives, two weeks ahead of an election.

Local news agencies showed people stamping on Rouhani's car and beating the windows as it tried to make its way through an angry crowd at the site in the northern Golestan province, where at least 26 people were killed by an explosion on Wednesday.

"Why is there no safety at the mine? Why does no one care?" shouted one emotional spokesman for the miners at the scene, in a video shared on social media.

"Last year, we gathered in front of the governor's office together with our wives because we were unpaid for 14 months. And you, the president, didn't even notice," he added.

Rouhani, who is standing for re-election on May 19, earlier addressed the crowd, saying: "The entire Iranian nation shares the sorrow of families of those killed in the Zemestan Yort mine accident.

"Those responsible and anyone who had a fault in the incident must be found and dealt with accordingly, without any exceptions."

As well as 26 confirmed dead, at least nine more miners were trapped inside after Wednesday's explosion, but officials say there is little chance they have survived.

The accident is thought to have been caused by concentrated methane gas that was triggered when workers tried to jump-start an engine.

Thousands of factories and industrial sites across Iran have struggled to keep up with payments in recent years due to the stagnant economy.

Conservative presidential candidates trying to unseat Rouhani have focused on the poor, saying government policies have only benefited the wealthy.

"Can you live with that?" he asked the president. "Look at this mother with seven children. We have nothing to eat."

Labor Minister Ali Rabii travelled 1,400 meters deep into the mine earlier on Sunday, where rescue teams have been trying to unblock the collapsed tunnel.

The president has ordered a task force to investigate the causes of the explosion and handle compensation for victims and their families.

"We are all responsible in this incident," said Rouhani, calling for tighter regulations in the mining sector.