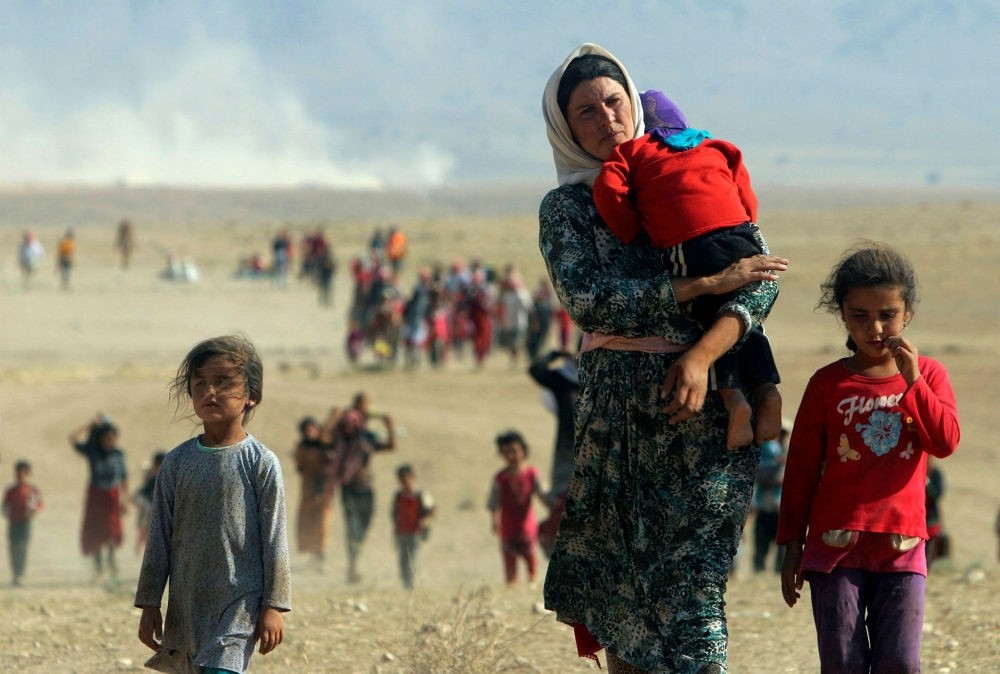 Displaced people from the minority Yazidi sect flee violence from forces loyal to Daesh in Sinjar, walk towards the Syrian border on the outskirts of the Sinjar Mountains.
by Daily Sabah with Reuters May 11, 2017 12:00 am

The first study on Yazidi community subjected to Daesh violence reveals that more than 10,000 Yazidis have been killed and kidnapped in 2014 in what a United Nations commission called a genocide against the Yazidis

At least 9,900 of Iraq's Yazidis were killed or kidnapped in just days in a Daesh attack in 2014, according to the first study to document the number of Yazidis affected which could be used as evidence in any trial for genocide.

About 3,100 Yazidis were killed - with more than half shot, beheaded or burned alive - and about 6,800 kidnapped to become sex slaves or fighters, according to the report published in the Public Library of Science journal PLoS Medicine on Tuesday.

"Until now, there has not been clarity on the numbers of Yazidis killed and captured by Daesh during the attack on Mount Sinjar," said lead researcher Valeria Cetorelli, a demographer from John Hopkins University and the London School of Economics and Political Science.

"What we wanted to do, in anticipation of a possible trial, is to provide the best estimates that we can get of the people affected," she told the Thomson Reuters Foundation.

Legal experts have said gathering evidence of the attacks is crucial since members of Daesh could go on trial for genocide in the future.

International human rights lawyer Amal Clooney last June said she aimed to prosecute Daesh through the International Criminal Court for their crimes against the Yazidi community.

Cetorelli said she spent three months in 2015 interviewing a random sample of 1,300 surviving Yazidi families in Iraqi camps, and found at least 2.5 percent of the minority group were killed or enslaved.

"Our findings are really consistent with other evidence, for example, what is being found in mass graves or accounts from survivors, people who managed to escape captivity," Cetorelli said.

"So all this together can really help support a formal genocide investigation by either the International Criminal Court or another appointed judicial authority."

The Yazidi community, which has become endangered in Iraq due to the threat posed by Daesh, is an authentic minority with a complex belief system. In August 2014, Daesh launched an assault on the Yazidi religious community's heartland in Sinjar, northern Iraq, home to around 400,000 Yazidis.

Yazidis are ethnically Kurdish, and their religion includes elements of Judaism, Christianity, Islam and Zoroastrianism. The center of their belief is in the Nineveh province of Iraq. Yazidis live in Armenia, Georgia, Turkey and Iraq. Yet, the number of Yazidis in Turkey, Armenia and Georgia has dramatically decreased after members of the community preferred migrating to European countries due to the religious discrimination they faced in the aforementioned countries. Yazidi beliefs distinguish themselves from the mainstream monotheistic religions insofar that Satan plays a different role in their faith. Contrary to the satanic understanding of Judaism, Christianity and Islam, which view Satan as the main source of evil, Yazidis say that Satan repented after his big sin, refusing Adam's superiority. Following the repentance, God authorized him as the world's administrator.

Like the three major monotheistic religions, Yazidis also have a book, which is called the "Black Book." Yet, the book is lost, and the beliefs are taught to new generations orally by the sheiks, the masters. Although Yazidis were able to continue their belief in the era of the Ottoman Empire and were able to establish good relations with Muslims, Daesh is not tolerant of them and is actively trying to wipe out this regional ethno-religious community.
RELATED TOPICS