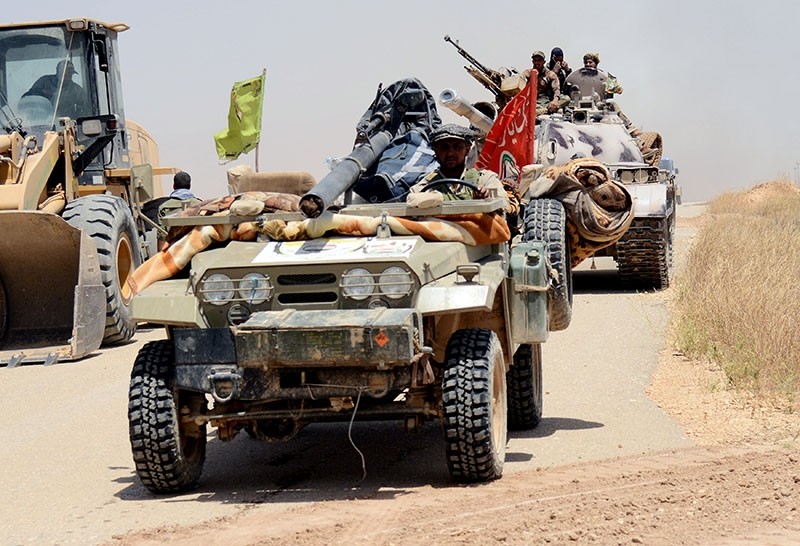 Popular Mobilization Forces (PMF) ride in military vehicles during a battle with Daesh militants, at Um Jaris village on the Iraqi border with Syria, Iraq May 29, 2017. (Reuters Photo)
by Jun 04, 2017 12:00 am

Shiite paramilitaries have captured the Iraqi town of Baaj from Daesh, further shrinking the northern region under terrorist control as part of a U.S.-backed campaign to retake the city of Mosul, the Iraqi military said on Sunday.

Eight months into the Mosul offensive, Daesh militants have been dislodged from all of the city except an enclave along the western bank of the Tigris River.

Daesh's grip on the Iraqi side of the northern region along the border with Syria, a desert area where Iraqi and U.S. sources believe Daesh leader Abu Bakr al-Baghdadi is hiding, has been ebbing as forces fighting on the side of Iraq's government have advanced.

The Iraqi air force provided cover for the thrust into Baaj of the Shiite paramilitaries known as Popular Mobilization (Hashd al-Shaabi), said a statement from the Iraqi joint operations command.

Popular Mobilization is steered by neighboring Shiite regional power Iran, an adversary of the United States, but is playing a part in the campaign to defeat Daesh, an enemy of both, in Mosul and the surrounding province of Nineveh.

Iraqi government armed forces are focusing their effort on dislodging insurgents from remaining pockets in Mosul, since 2014 Daesh's de-facto capital in Iraq.

While reporting nominally to Iraq's Shi'ite-led government, Popular Mobilization has Iranian military advisers, one of whom died last month fighting near Baaj.

Securing border territory between Iraq and Syria is important for Iran to reopen a land route to supply Bashar al-Assad's army with weapons in his protracted war with rebels and militants.

A statement published by Popular Mobilization announcing the capture of Baaj came from Abu Mahdi al-Muhandis, a prominent leader of the paramilitary with longstanding ties to Iran.

Iran has helped to train and organize thousands of Shiite militiamen from Iraq, Afghanistan and Pakistan in Syria's war. Fighters from Lebanon's Shiite Hezbollah are also working closely with Iranian military commanders in Syria.

U.S. and Iraqi officials believe Daesh leader al-Baghdadi has left operational commanders behind with diehard followers to fight on in Mosul and is now focusing on his own survival.