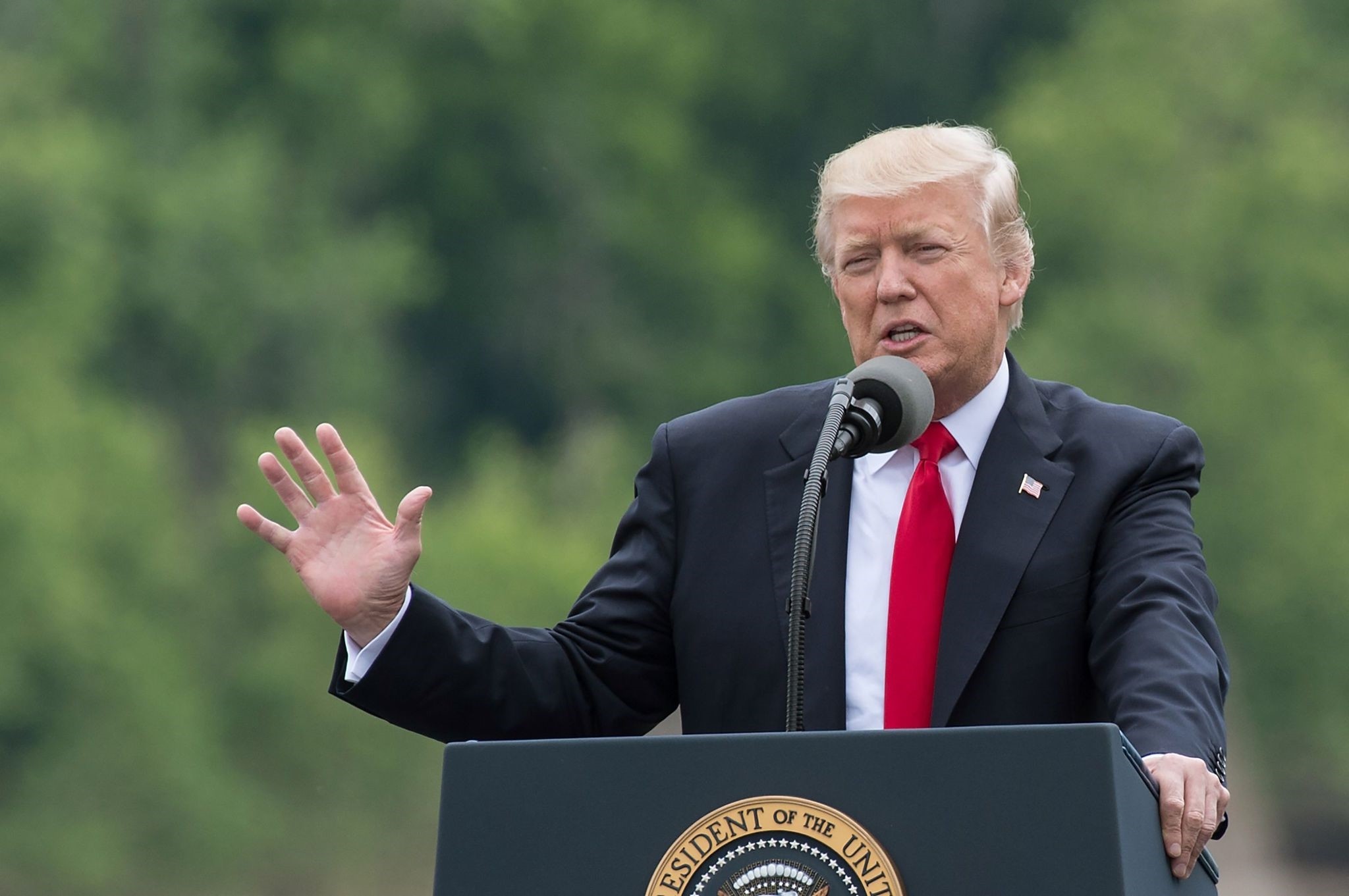 US President Donald Trump speaks in Cincinnati, Ohio, on June 7, 2017. Trump spoke about infrastructure and healthcare. (AFP Photo)
by Associated Press Jun 07, 2017 12:00 am

President Donald Trump on Wednesday offered solace to the victims of the twin terrorist attacks in Iran while suggesting Tehran bears some culpability, saying "states that sponsor terrorism risk falling victim to the evil they promote."

Hours after conciliatory comments from his State Department, the president said in a one-paragraph statement that the United States grieves and prays for the innocent victims of the assault against Iran's Parliament and the shrine of Iran's revolutionary leader, Ayatollah Ruhollah Khomeini, that killed at least 12 people. The Islamic State group claimed responsibility.

Trump added his broadside against Iran, which the U.S. has designated as a state sponsor of terrorism since 1984.

"We underscore that states that sponsor terrorism risk falling victim to the evil they promote," he said.

State Department spokeswoman Heather Nauert had said the U.S. is sending thoughts and prayers to the Iranian people following the attacks.

"The depravity of terrorism has no place in a peaceful, civilized world," said Nauert, who said the U.S. is expressing condolences to the victims and their families.

The U.S. statement of solidarity with the attack's victims is notable because of the deep distrust between the U.S. and Iran. The two countries don't maintain diplomatic relations, and the Trump administration has emphasized the need to counter Iran's influence.

The distrust of Iran was evident on Wednesday when shortly after the condemnation, Republicans and Democrats in Congress acted in a procedural vote to move forward on a new set of sanctions on Iran, including on its elite Revolutionary Guards. The strong bipartisan vote was 92-7.

The bill would impose mandatory sanctions on people involved in Iran's ballistic missile program and anyone who does business with them. The measure also would apply terrorism sanctions to the country's Revolutionary Guards and enforce an arms embargo.

A few senators pleaded for a delay until next week of the previously scheduled vote in light of the attacks in Iran.

"Let us tell the people of Iran that while we have serious disagreements with them on a number of issues, that today when they are mourning, when they are dealing with the shock of a terrorist attack, today is not the day to go forward with this piece of legislation," Sen. Bernie Sanders, I-Vt., said.

Sen. Chris Murphy, D-Conn., also pushed for a delay, but Republicans and Democrats pressed ahead.

The bill is a "carefully crafted response to Iran's ongoing aggression in the Middle East," Sen. Bob Menendez, D-N.J., said.

Last month, the Foreign Relations Committee backed the measure despite concerns from former Secretary of State John Kerry and several Democrats that it could nonetheless lead to the unraveling of the nuclear accord negotiated by the Obama administration.

Kerry cautioned lawmakers to "tread carefully" in pushing ahead with new sanctions against Iran in the wake of President Hassan Rouhani's re-election to another four-year term. Rouhani is a political moderate who scored a resounding victory over a hard-line opponent.

Sen. Bob Corker of Tennessee, the committee's Republican chairman and one of the bill's sponsors, said he recently reviewed top-secret intelligence that detailed Tehran's support for terrorism and other destabilizing actions.

"It is astounding what Iran continues to do around the world," said Corker, urging his colleagues to confront the threat Tehran poses.

In exchange for Iran rolling back its nuclear program, the U.S. and other world powers agreed to suspend wide-ranging oil, trade and financial sanctions that had choked the Iranian economy. As part of the July 2015 multinational accord, Iran also regained access to frozen assets held abroad.

Israel and congressional Republicans have long assailed the agreement as a windfall to Iran. They've argued the deal only delayed Iran's pursuit of nuclear weapons and failed to allow the kind of inspections of its atomic sites that would guarantee Tehran was not cheating. Lifting economic sanctions saved Iran's economy, GOP lawmakers added, and allowed the country to funnel more money to terrorist groups.

Yet the nuclear deal remains in place despite Trump's pledge during the presidential campaign to discard or renegotiate the pact. Instead, the State Department took a key step last week toward preserving the pact by issuing a waiver to keep the sanctions from snapping back into place. And the Trump administration notified Congress last month that Iran is complying with the terms of the agreement.

Senate Majority Leader Mitch McConnell, R-Ky., said that as the Iran legislation moves forward, lawmakers will have an opportunity to offer amendments that would authorize new sanctions on Russia.