Many causalities in Mosul due to heavy weapons, rights groups say 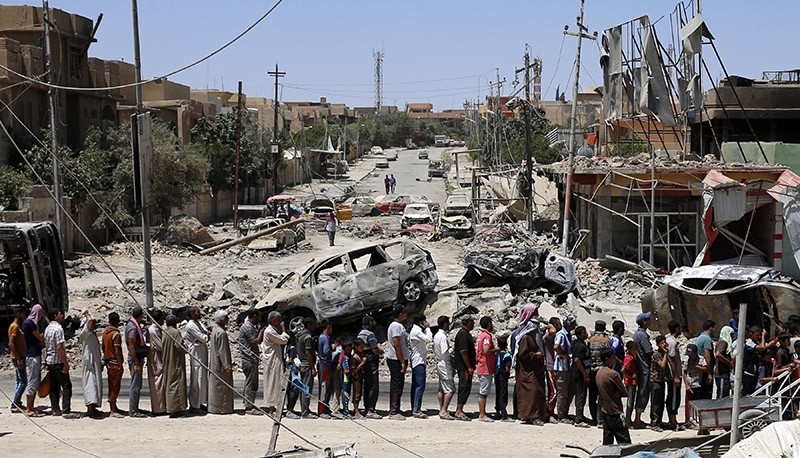 Iraqis stand in line to receive food aid in western Mosul's Zanjili neighbourhood on June 7, 2017, during ongoing battles as Iraqi forces try to retake the city from Daesh terrorists. (AFP Photo)
by Associated Press Jun 09, 2017 12:00 am

Large numbers of civilians are being killed and injured in western Mosul because Iraqi and U.S.-backed coalition forces are relying on the use of heavy weapons as they struggle to push Daesh terrorists from the city, human rights organizations warned.

Heavy ordnance, such as 500-pound (227-kilogram) air-delivered bombs, are causing excessive and disproportionate damage to civilian life and property, which is prohibited under international humanitarian law, organizations including Human Rights Watch, Amnesty International and the Center for Civilians in Conflict warned.

Their combined report released Thursday also pointed to the use of artillery systems, including heavy mortars and locally fabricated rocket launchers that lack a guidance mechanism, and are therefore inherently imprecise and indiscriminate.

"Such disproportionate military attacks are prohibited under international humanitarian law," the report said.

Backed by the U.S.-led international coalition, Iraq last October launched a wide-scale military offensive to recapture Mosul and the surrounding areas, with various Iraqi military, police and paramilitary forces taking part in the operation. The city's eastern half was declared liberated in January, and the push for the city's western section, separated from the east by the Tigris River, began the following month.

Iraqi forces are in their last push to drive Daesh terrorists from the remaining pockets of territory they still hold in the Old City where narrow streets and a dense civilian population are complicating the fight.

The use of powerful and often inaccurate weapons is problematic because a very large number of civilians — as many as 180,000, according to the United Nations — remain in the Daesh-controlled areas of the city, now little more than 1.5 square miles (4 square kilometers). The situation is made more difficult by Daesh' practice of using civilians as human shields and stopping people from leaving.

Many of the recently retaken areas of western Mosul are reduced to rubble, in some cases with entire families killed in airstrikes or shelling.

Amran Waabdullah Jumaa, 35, said his mother was killed on 12 May in an airstrike outside their house in the 17 Tammouz district. They buried her in the garden along with another woman who had died in the same strike.

"She was killed by these American smart bombs or whatever they call them," he said.

Ahmed Najim Abdullah, 27, a resident of the Zanjili district of western Mosul, lost three members of his family when their house collapsed on them after an airstrike. He was trying to dig the rest of them out from under the rubble when another rocket hit, injuring him in several places.

"It's well known that the houses there are very old, the missiles weigh over 200 kilos (440 pounds), it hits the house and when it hits one house the next four or five houses will collapse with it too," he said in his hospital bed in Irbil.

Military analysts say that Iraqi and coalition forces rely on these weapons because they are trying to minimize their own casualties, which have been considerable. According to a recent U.S. Defense Department report, Iraqi special forces have suffered a staggering 40 percent casualty loss in Mosul so far.

The U.S.-led coalition estimates that its airstrikes unintentionally killed at least 484 civilians between the start of the Mosul campaign and June 2. Airwars, the United Kingdom-based non-governmental organization that monitors airstrikes, believes the real number may be as high as 3,800. These numbers do not include the number of people who have been killed by artillery shelling, for which there is no reliable estimate.