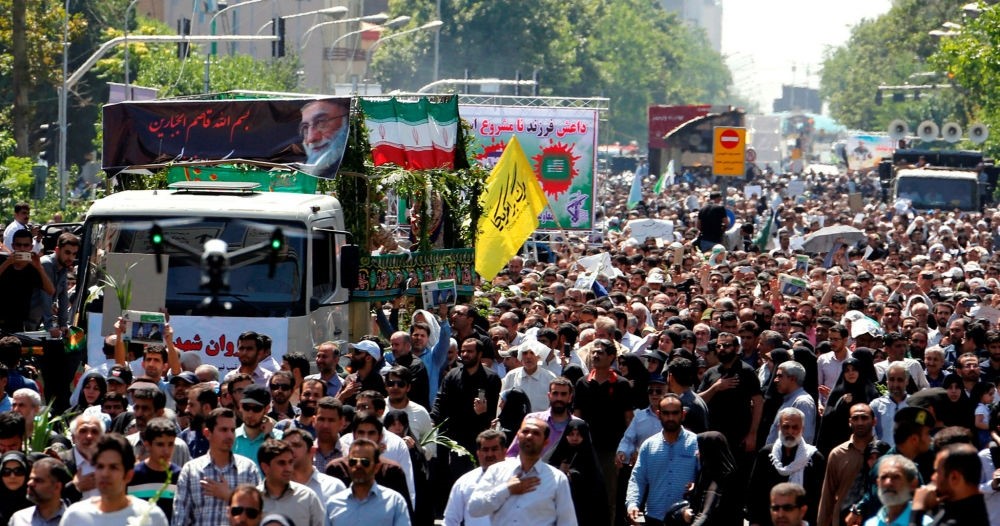 Iranians march during the funeral of the victims of the twin attacks in the capital Tehran on June 9.
by Compiled from Wire Services Jun 10, 2017 12:00 am

Iranian leaders accused the United States and Saudi Arabia on Friday of supporting the Daesh-claimed dual attacks that killed 17 people in Tehran this week, as thousands of Iranians attended a funeral ceremony for the victims.

Iran's supreme leader, Ayatollah Ali Khamenei, said the attacks will add to the hatred that Iranians harbor toward the U.S. and Saudi Arabia. "Such acts will have no other result than to reinforce hatred for the U.S. government and its agents in the region, like the Saudi [government]," Khamenei wrote in a message of condolence to the families of the dead.

Parliament speaker Ali Larijani also attacked the United States and Saudi Arabia, which he called "a tribal state very far from anything like a democracy." Larijani also criticized a Wednesday decision by the U.S. Senate to move forward on a new set of sanctions against Iran, including its elite Revolutionary Guards, a move that came on the same day as the Tehran attacks.

On Thursday, Iran's Intelligence Minister Mahmoud Alavai said investigators were working to determine whether Saudi Arabia had a role in Wednesday'sattacks but said it was too soon to say if that was the case.

The Revolutionary Guard Corps, meanwhile, has accused Saudi Arabia and the U.S. of standing behind Wednesday's deadly attacks.

Reportedly two guards, 10 government staffers and five civilians were killed in the attacks that simultaneously targeted the country's Parliament and the shrine of the late founder of the Islamic Republic, Ayatollah Ruhollah Khomeini. The Iranian Students' News Agency (IRNA) quoted a ministry statement that provided the identities of the attackers, who, the ministry said, had fought for Daesh in the Syrian city of Raqqah and the Iraqi city of Mosul. The attackers had entered Iran at some point last year, the ministry said without providing precise dates.

Since U.S. President Donald Trump took office in January, the yawning gap between Tehran and Washington has grown even wider with Trump's latest efforts to isolate Iran in the region, while bolstering cooperation with Saudi Arabia and the Gulf countries. Sending a tough message to Tehran shortly after pragmatist Hassan Rouhani was re-elected president, Trump urged Arab leaders to unite to defeat militants, and said Iran had for decades "fueled the fires of sectarian conflict and terrors." Trump's choice of Saudi Arabia, Iran's bitter regional rival, for his first official foreign visit reflects the deep antagonism of his administration toward Iran.