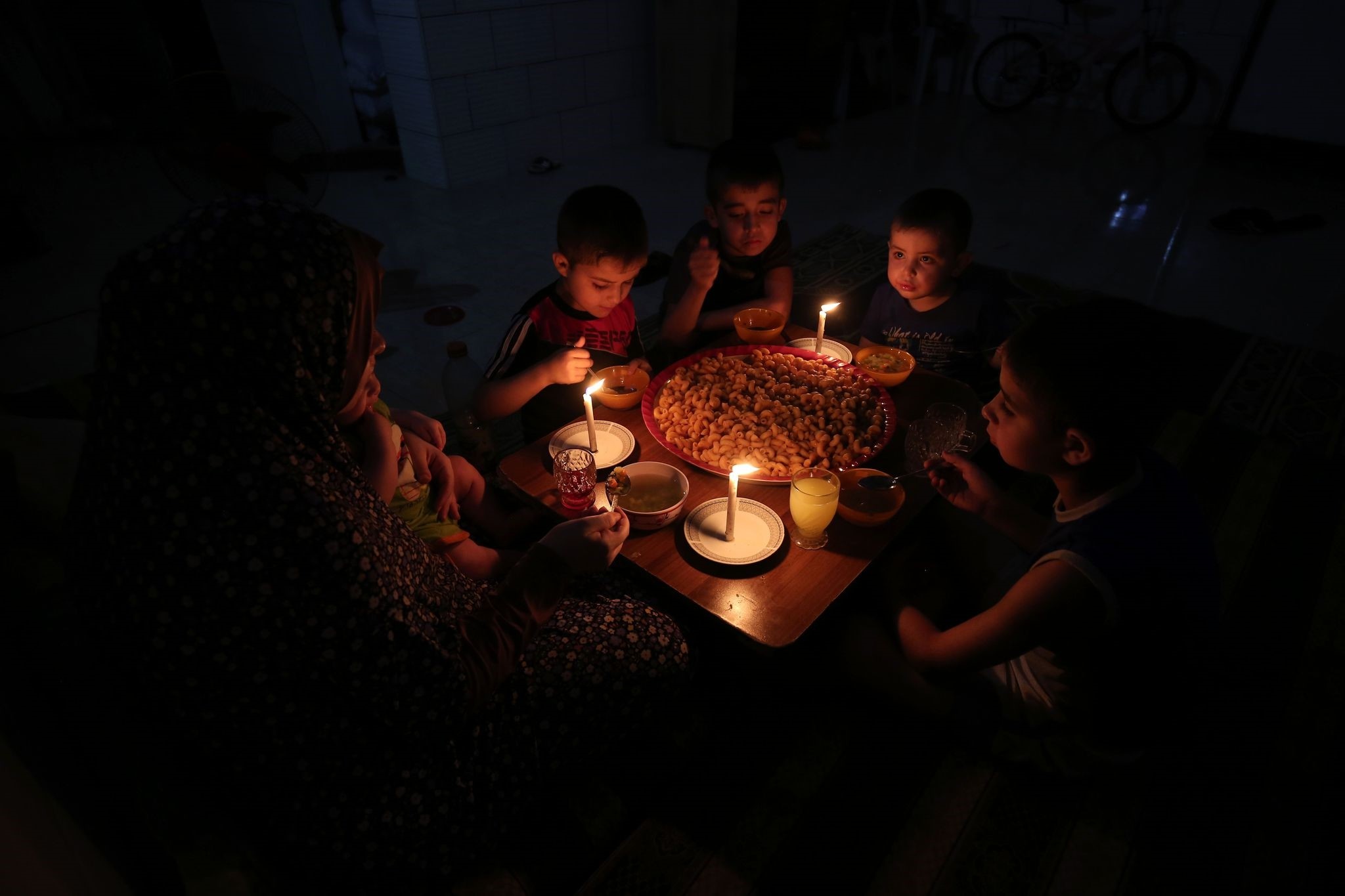 A palestinian family eats dinner by candlelight at their makeshift home in the Rafah refugee camp, in the southern Gaza Strip, during a power outage on June 11, 2017. (AFP PHOTO)
by Compiled from Wire Services Jun 12, 2017 12:00 am

Israel will reduce electricity supplies to the Gaza Strip after funding cuts by Palestinian president Mahmud Abbas, a minister said Monday, worsening an already severe shortage in the city that is under Israeli blockade.

Gaza's 2 million residents already get by with only four hours of electricity a day. In an effort to push his Hamas rivals out of power, Abbas says his West Bank government will stop paying Israel to provide electricity.

The security cabinet decided Sunday to reduce the daily amount supplied to Gaza by around 45 minutes, Israeli media reported.

Residents who can afford it use generators to power their homes or businesses in the impoverished Palestinian enclave of some two million people.

Israeli Public Security Minister Gilad Erdan, also a cabinet member, told army radio the reduction was due to an ongoing row between Abbas and his rivals Hamas.

Abbas has reportedly decided to slash electricity payments for Gaza in a further bid to pressure Hamas.

But the reduction has also sparked fears of another upsurge in violence, with Israel and Hamas having fought three wars since 2008.

An Israeli official confirmed that Israel is preparing to reduce the amount of power it supplies to Gaza, at the request of the Palestinian Authority. The official estimated that the reduction would limit power in Gaza to three hours a day.

"This Israeli decision is dangerous and catastrophic," said Hamas spokesman Abdulatif al-Qanou. "This virtually speeds up the deterioration and explosion of the situation in the Gaza Strip."

After repeated failed reconciliation attempts, Abbas has tried to squeeze Hamas financially in recent months, hoping to force it to cede control of Gaza, which the Islamic militant group has ruled for the last decade. He slashed salaries of his employees there, stopped payments for ex-prisoners and reinstated taxes on the power plant's fuel.

Most recently, he asked Israel to reduce Gaza electricity by 40 percent. The Israeli decision appears to be seeking a compromise.

"Let's not forget, this is Abu Mazen's decision," Israel's Public Security Minister Gilad Erdan told Army Radio Monday, referring to Abbas by his nickname. "Should Israeli citizens pay the electric bill of the residents of Gaza? Of course that doesn't make sense."

Gazans have been trying to cope with the lengthy outages. The poor have been relying on battery-operated lights, the middle class on communal generators and the few wealthy families have turned to solar energy.

But authorities warn of an impending crisis in health care and the environment. Each day, 120,000 cubic meter of untreated sewage are discharged into the sea.

The Gaza electricity distribution company says it has not yet been informed of the Israeli decision to slash electricity, but warned of "serious deterioration" if the cuts went into effect.

"We barely provide four hours of electricity in Gaza and in some neighborhoods they get three," said Mohammed Thabet, a spokesman for the company. "We can't predict how many hours people can get if the electricity is reduced."

Gisha, an advocacy group pushing for increased movement of people and goods across Gaza's borders, sent a letter to Defense Minister Avigdor Lieberman warning of a severe crisis if the cuts went through. It said reducing the supply to Gaza was a "red line that must not be crossed."