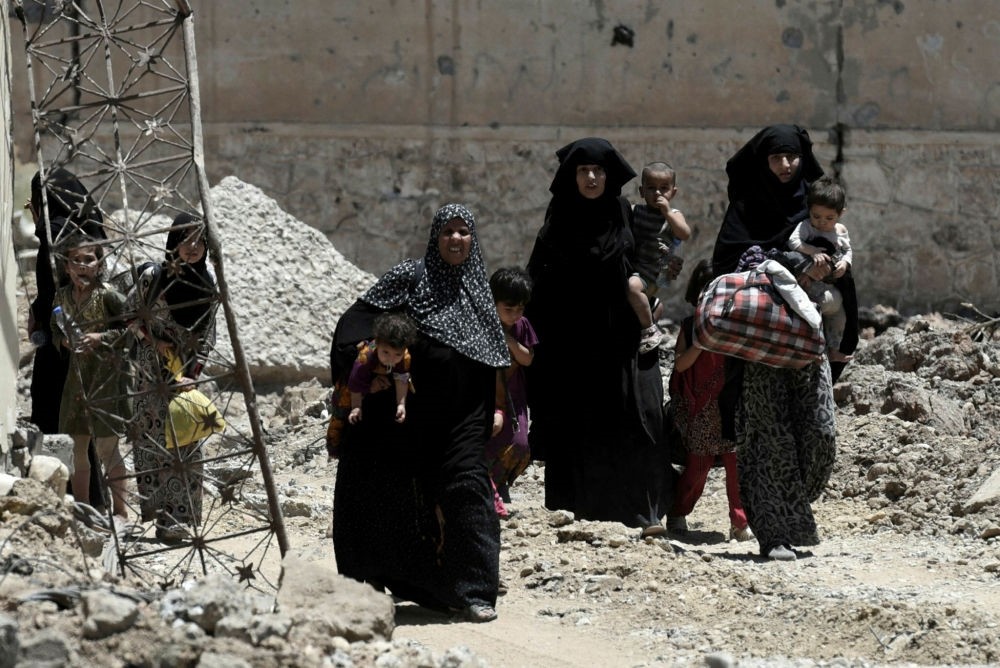 Displaced Iraqi women walk towards Iraq forces as they flee their homes in Mosul's western Al-Shifa district on June 15.
by Compiled from Wire Services Jun 17, 2017 12:00 am

As the Mosul operation enters its ninth month, over 100,000 civilians remain trapped behind Daesh lines in Mosul, revealing a growing humanitarian crisis in the war-torn city

Over 100,000 civilians remain trapped behind Islamic State lines in Mosul with a U.S.-backed government offensive to recapture the Iraqi city entering its ninth month, the United Nations refugee agency UNHCR said on Friday.

The U.N. refugee agency's representative in Iraq Bruno Geddo said Daesh had been capturing civilians in battles outside of Mosul and had been forcing them into the Old City, one of the last parts of the city in their grip. "More than 100,000 civilians may still be held in the Old City," Geddo told reporters in Geneva.

"We know that ISIS moved them with them as they left... locations where the fighting was going on," he said, using another acronym for IS, which is also known as Daesh. "These civilians are basically held as human shields in the Old City." With virtually no food, water or electricity left in the area, the civilians are "living in an increasingly worsening situation of penury and panic," he said. "They are surrounded by fighting on every side."

Snipers meanwhile try to kill anyone trying to leave the area under jihadist control, he said, adding that the few who manage to escape are "deeply traumatized."

The Mosul offensive, now in its ninth month, has taken much longer than expected, with Iraqi government advances slowed by the need to avoid civilian casualties. When Daesh captured Mosul back in 2014, the Iraqi government faced criticism for being unable to defend one of its largest cities. The oil-rich city fell to Daesh easily as the Iraqi troops avoided clash and fled posts, abandoning their weapons. Today, several groups are cooperating on the ground, but primarily due to international pressure and the U.S. handling of military operations. Interestingly, they had exist during Mosul's fall too, as the Iraqi army unlike other regular armed forces, consisted of several armed groups with different ethnic and sectarian backgrounds and it is a known fact that these groups do not like each other. The battle, however, will not probably end soon and its costs, especially the humanitarian one, will increase.

Since the battle to retake Mosul began nine months ago, an estimated 862,000 people have been displaced from the city, although 195,000 have since returned, mainly to the liberated east of the city. That means 667,000 people remain displaced, nearly all of them from western Mosul, and are living in 13 camps set up by UNHCR or with host families.

Geddo said the U.N. agency so far had provided assistance to more than 500,000 of the displaced people, and was also attempting to help those returning to Mosul, often to live in bombed-out buildings. "Many of these people are returning ... to situations of penury," he warned.