Cholera death toll in Yemen increases to 1,146, WHO says 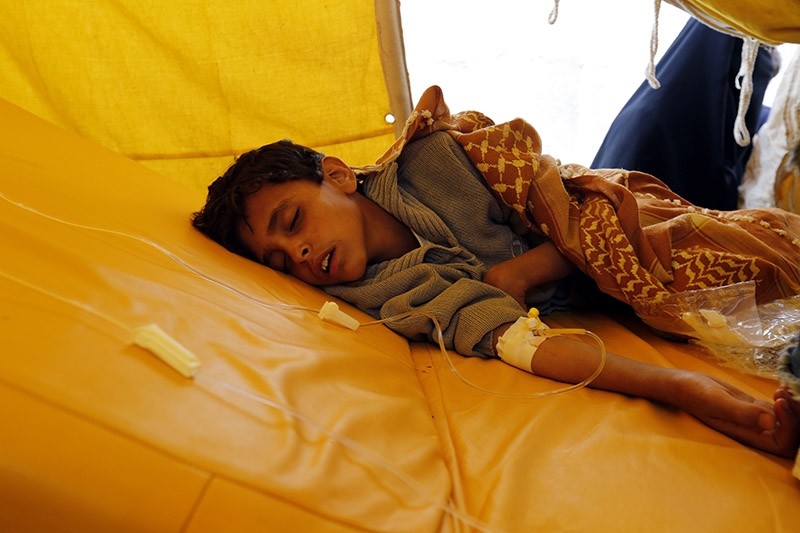 A Yemeni child suspected of being infected with cholera receives treatment inside a makeshift tent at a hospital in Sanau2019a, Yemen, 15 June 2017. (EPA Photo)
by Compiled from Wire Services Jun 20, 2017 12:00 am

The death toll from a cholera outbreak in Yemen has risen to 1,146 over the past two months, according to the World Health Organization.

The UN health agency said the outbreak has affected 20 of Yemen's 22 provinces since it was first reported at the end of April.

Cholera, which is contracted through contaminated water and causes severe diarrhoea and vomiting, is easily treatable and preventable.

Yet, the outbreak comes at a time when more than half of Yemen's healthcare facilities are no longer functional because of the ongoing war between the Saudi-backed government and Iran-aligned rebels.

The disease can kill within hours if left untreated. In the last week alone, at least 187 deaths were reported from cholera, in addition to almost 38,000 suspected cases.

There are 166,976 suspected cases since April 27, WHO said on Twitter on Monday.

The UN estimates that some 7.6 million people live in Yemen's cholera-threatened areas.

Yemenis have been suffering from a significant lack of access to food, clean water, as well as medication that have resulted in the spread of cholera.

Impoverished Yemen has remained in a state of civil war since 2014, when Houthi rebels overran much of the country, including the capital Sanaa.

According to UN officials, more than 10,000 people have been killed in the war, while more than 11 percent of the country's population has been displaced as a direct result of the conflict.