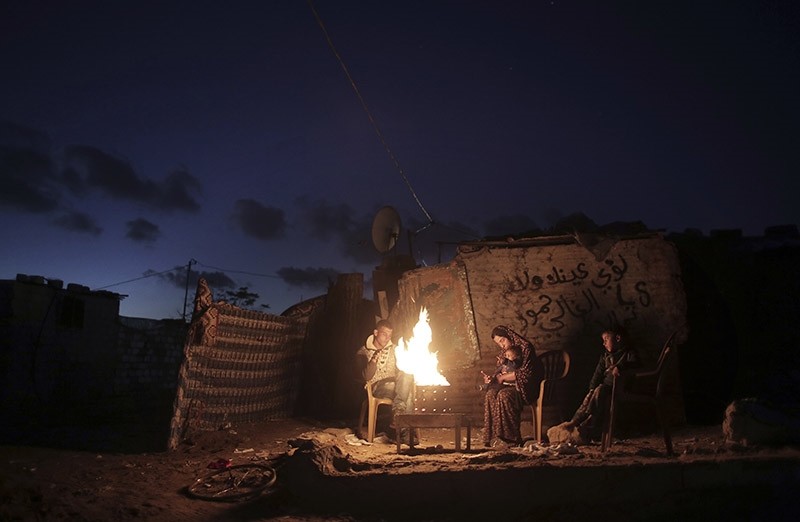 In this Sunday, Jan. 15, 2017 file photo, a Palestinian family warm themselves up with a fire outside their makeshift house during a power cut in a poor neighborhood in town of Khan Younis in the southern Gaza Strip. (AP Photo)
by Jun 21, 2017 12:00 am

Egypt began on Wednesday to deliver a million liters of fuel to Gaza, a Palestinian official said, in an attempt to ease the Palestinian enclave's desperate electricity crisis.

The fuel, trucked in through the Rafah border between Egypt and Gaza, will be routed to the territory's only power station -- closed since April due to fuel shortages.

Wael Abu Omar, the Rafah crossing spokesman, told AFP that eight shipments had entered, with a further 14 expected later in the day.

That is enough to enable the power station to operate for two to three days, Samir Moutair, director general of the Gaza electricity company, told AFP.

Residents of impoverished Gaza -- where two million people live fenced in between Israel, Egypt and the Mediterranean -- were already receiving only a few hours of mains power before this week.

Israel had been supplying 120 megawatts of electricity to Gaza a month, making up around a quarter of the territory's needs, with the Abbas-run Palestinian Authority paying the 11.3 million euros ($12.65 million) monthly bill.

But after Abbas announced he would no longer pay, the Israel Electric Corporation said power supply would "effectively be reduced on two lines out of 10 every day, until the reduction applies to all 10 lines".

The move threatened to leave Gazans with as little as two hours of power a day, prompting a UN warning that basic services in the enclave faced "total collapse".

The Egyptian response temporarily eases the crisis and Abu Omar said further deliveries were expected before Saturday, ahead of the Muslim festival of Eid al-Adha marking the end of the holy fasting month of Ramadan.

Hamas seized control of Gaza from Abbas's Fatah movement in a near civil war in 2007 and multiple attempts at reconciliation have failed.

However, the Palestinian Authority had continued to pay Israel for some electricity delivered to Gaza until this month.

Israeli human rights group Gisha said in a statement on Monday that by reducing supplies "Israel is knowingly aggravating an already dangerous situation in which the strip is teetering on the verge of a humanitarian crisis."