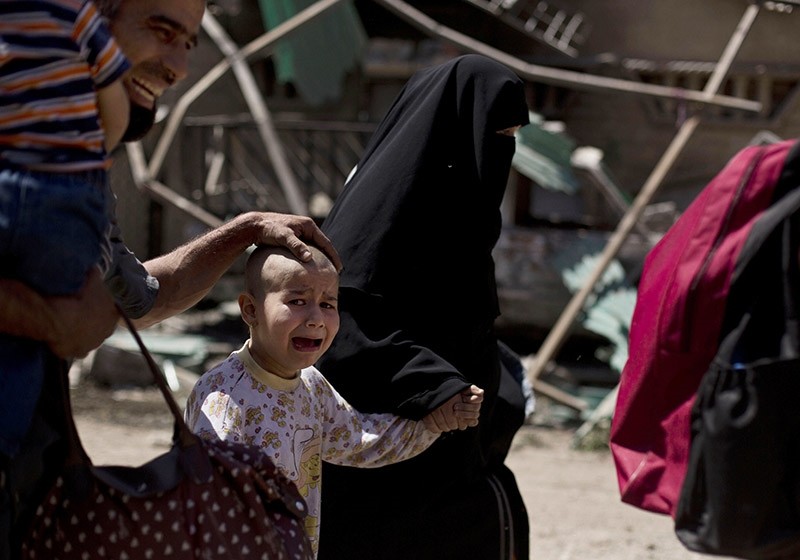 In this May 17, 2017 file photo, a girl with a shaved head and her father cry as the family flees the al-Rifai neighborhood while Iraqi special forces battle Daesh terrorists in western Mosul, Iraq. (AP Photo)
by Compiled from Wire Services Jun 22, 2017 12:00 am

The Daesh terror group is targeting children in Mosul to prevent civilians from fleeing the city as Iraqi forces push into the last stronghold held in Iraq by the terrorists there, the United Nations said Thursday.

The U.N. children's agency said it has documented a number of cases in which Daesh terrorists killed the children of families trying to escape from neighborhoods controlled by the terror group.

"They are using children as a weapon of war to prevent people from fleeing," said UNICEF's Iraq representative, Peter Hawkins. "This just highlights how indiscriminate and catastrophic this war is."

Iraqi troops are slowly clearing the last pockets of Daesh terrorists from Mosul's old city in an operation launched earlier this week. But an estimated 100,000 civilians packed into the dense terrain have slowed progress.

There have been 138 attacks on schools and 58 on hospitals; more than 3 million children do not attend school on a regular basis while 1.2 million children are out of school and, one in every four children comes from a poor household, UNICEF said.

"In Iraq, children are trapped in an endless cycle of violence and increasing poverty, the Children's agency said, while noting the conflict has displaced 3 million people - half of them children."

The agency said more than 5 million children are in need of urgent humanitarian assistance.

Iraq has been roiled by violence since Daesh seized vast swathes of territory in northern and western Iraq in 2014.

Iraqi forces, backed by air cover from a U.S.-led coalition, are currently engaged in a wide-scale offensive aimed at dislodging Daesh from Mosul.