Russia targets Daesh in Syria’s Hama with missiles from Mediterranean 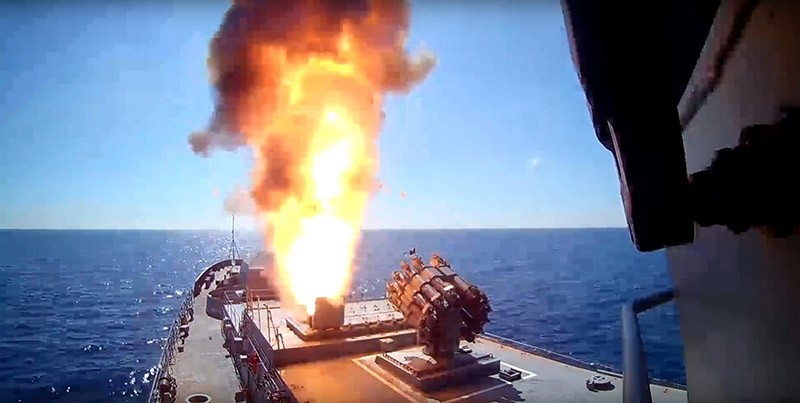 An undated handout video grab made available by the Russian Defence Ministry on 31 May 2017 shows the Admiral Essen frigate of the Russian Navy launching Kalibr cruise missiles from the Mediterranean Sea (reissued 16 June 2017). (EPA Photo)
by Compiled from Wire Services Jun 23, 2017 12:00 am

Six Kalibr cruise missiles were launched from the Admiral Essen frigate, the Admiral Grigorovich and from Russia's Krasnodar submarine, destroying Daesh command posts and ammunition depots in the town of Akerbat, the ministry said but did not give information on the date of the strikes.

It said that Turkish and Israeli military "were informed in a timely manner of the missile launches through communication channels," but it did not mention the United States.

Russia suspended its communication channel with the U.S. about military operations in Syria from Monday after a U.S. jet shot down a Syrian warplane on Sunday, with Moscow accusing Washington of failing to issue a warning.

In late May, the Russian navy launched four Kalibr cruise missiles against Daesh in the historic city of Palmyra.

The sea-based Kalibr cruise missiles are capable of delivering high-precision strikes at a distance of 1,500 kilometers (932 miles) against sea and land targets.

The defense ministry on Friday said that Daesh this week has been moving forces into Hama province under cover of night and using large buildings there as command points and weapons stores. It said this was part of attempts to move out from Raqqa towards Palmyra