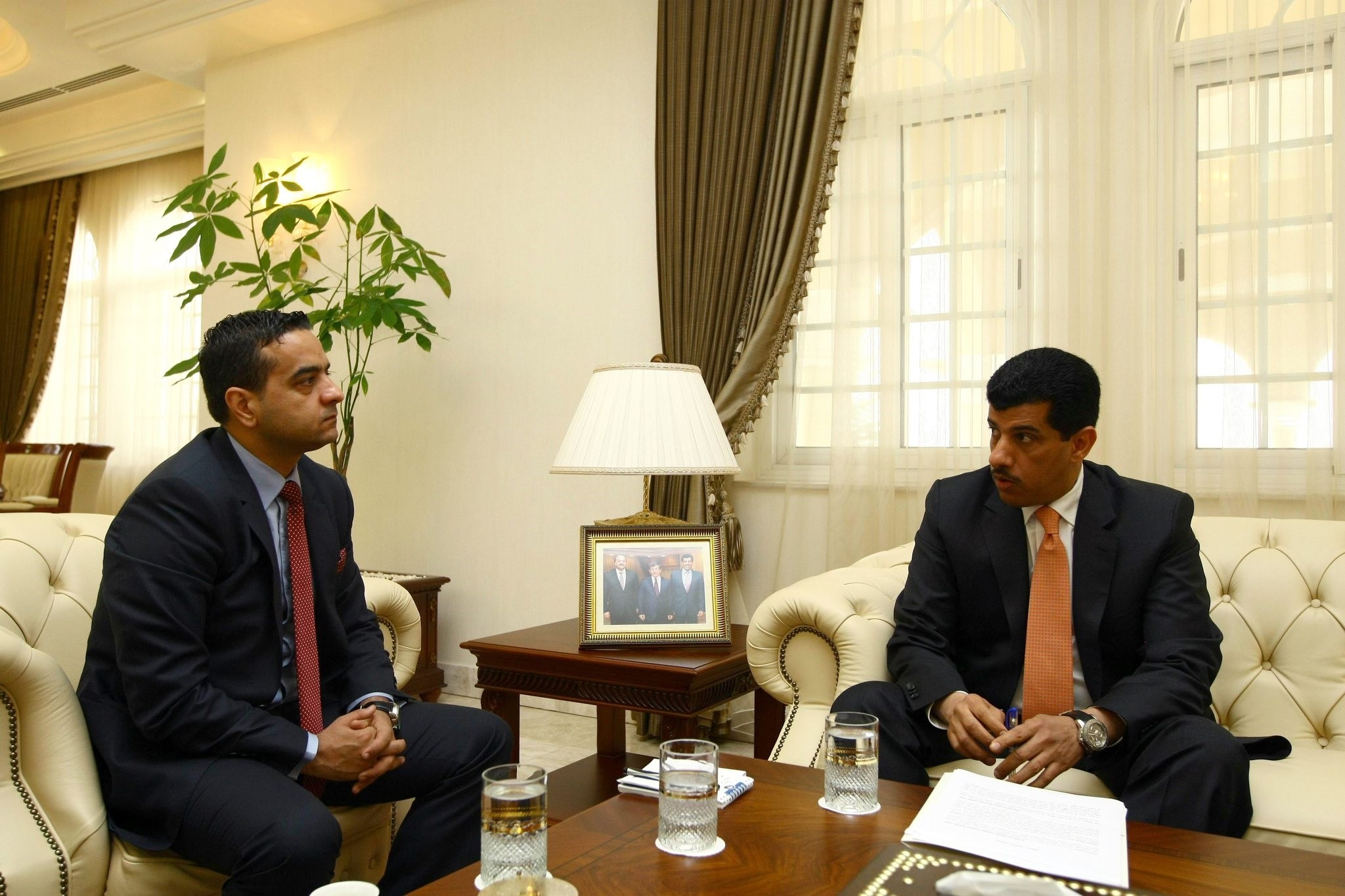 Daily Sabah spoke with Qatar's Ambassador to Ankara Salem bin Mubarak Al Shafi about the reasons behind the embargo currently being enforced unpon Qatar. Explaining that Gulf countries were disturbed by the cooperation between Qatar and Turkey, Al-Shafi asserted that Qatar was under blockade and that the enforced sanctions were a crime against humanity.

Some are saying that Qatar isn't facing a blockade, only a boycott. What is your response to this claim?

Qatar has a singular border gate and it's with Saudi Arabia; when Saudi Arabia closed down this border gate, it severed Qatar's connection with the world. This means it's a blockade. All Saudi media outlets, including Al-Shark Al-Awsat, Ukaz and Al-Iqtisadi, are defining the action against Qatar as a blockade. We have saved all of these documents. Moreover, Western countries also consider it to be a blockade.

They have shut down their air spaces to our aircraft; however, we're able to bypass this issue by using Iranian and Turkish air spaces. If they had control over it, they would try to bar us from both of these air spaces as well. Now, they are bothered by the aid Turkey is providing to Qatar and want to halt it. Still, they're claiming that this is not a blockade.

They ask their citizens and corporations to cut ties with us, while simultaneously claiming that they're ready to provide aid to Qatar if need be. We have rejected their offers, of course. The reality is that their people need the aid more; therefore, they should first help their own people.

"These sanctions are a crime against humanity"

Whatever is being enforced against Qatar is illegal and immoral; it is against the values of Islam, Arabs and humanity in general. Thousands of families were hurt because of this decision. We have recorded all the infringements and filed our case to related international institutions. Human rights institutions are doing what is necessary.

Using the Holy Lands as a means for political conflicts is unacceptable. Moreover, it's not allowed in Islam. They have forcibly deported Qatari pilgrims, citizens and students. We have asked for help from the Sultane in Umman and Kuwait Airways to secure our citizens' return to Qatar. Some of them had to make a transfer from Turkey. On the other hand, this situation also caused harm to animals. Domestic animals like cows, goats and sheep belonging to Qatari citizens were also deported. We have evidence on these events.

These actions will leave a mark on the history of the perpetrators. Almost all of the greater countries in both the Islamic and Western world are against this blockade. Officials of the countries enforcing the blockade are denying it; however, their people know the truth. They lost their credibility when they couldn't produce evidence against Qatar.

How do you respond to the allegations that Qatar is funding terrorist organizations? What are some of Qatar's counter-terrorism activities?

There are baseless allegations about Qatar funding terrorist organizations, and these allegations are being refuted continuously. Even though we demanded physical evidence from the accusing countries, they were unable to show even one. Similarly, the U.S. had also asked them to reveal evidence on this issue. These countries are trying to manipulate the international community and great powers while using terrorism as an excuse in order to further their illegal interests towards Qatar.

"It is obvious who utilizes terror as a political tool"

Moreover, it is known that those countries are utilizing terror as a political tool. They have been utilizing terror to stay in power for a long time, to receive foreign aid, to become closer with certain countries and to legitimize their interests. For this purpose, they accuse Hamas of conducting terrorism, even though the citizens of the said countries are against this notion. Similarly, they have accused peaceful political groups like the Muslim Brotherhood of being a terrorist organization, just because these officials perceive these political groups as competitors. Qatar has been an active and efficient actor in the fight against terrorism; we are providing financial, political and military aid to all international platforms that are fighting against terrorism.

We were in active cooperation in counter-terrorism operations with the countries enforcing the blockade. Our soldiers joined the Islamic and Arabic coalition that was formed by Saudi Arabia. They have fought against Houthis; our soldiers were martyred while defending Saudi Arabia's borders. We see all Gulf countries as our brothers and we can never allow them to suffer any harm. We are acting in accordance with our religious belief and are heeding the voice of our conscience. Nevertheless, look at how we have been treated. Despite the ongoing crisis, we haven't suspended our security cooperation with the said countries. For instance, we have delivered a person who was wanted by Saudi authorities.

Al Jazeera's closure is also among the list of demands. What are your opinions on this matter? What does future hold for Al Jazeera?

As our Minister of Foreign Affairs stated, Al Jazeera is not open for negotiation. Demanding the closure of Al Jazeera is an unacceptable intervention into our domestic affairs. Could you imagine BBC, CNN or TRT being closed down just because a country demanded it? Of course not. No independent and sovereign country would allow others to tell them what they should do. The countries enforcing the blockade that perceive themselves as regional powers want to close down a channel or a news website; this is only the sign of weakness. They want all channels through which Arabs can express themselves to be shut down.

UAE's Ambassador to Moscow Omar Ghobash made a statement to the British daily The Guardian. He said "We do not claim to have press freedom. We do not promote the idea of press freedom." For this reason, they believe that asking for the closure of Al Jazeera is rational and reasonable.

Closing down the military base in Qatar is another demand that has been made. What will be your position in this matter?

This base was established in accordance with the joint defense agreement between Turkey and Qatar that was signed in 2014. This wasn't a secret agreement. The aims of the agreement are to secure peace in the Gulf and the region in general, while contributing to the stability in the area. All military bases in this region have the same goal.

This agreement was signed between two independent and sovereign countries; thus, it doesn't need the approval of a third party. Demanding the closure of the said military base and the severance of relations with Turkey is nothing but interfering with our domestic politics and trying to force a tutelage system on Qatar. This is against international law; furthermore, it reveals that terror isn't the matter here. Terror is just an excuse to get to Qatar.

"Closure of the Turkish military base is unreasonable"

They claim that this crisis was in the making for 20 years. 20 years ago, they attempted a coup that was plotted from Manama to depose Qatar's ruler; however, they were unsuccessful. If they don't have any ill will towards Qatar, they should respect Qatar's agreement with other countries.

Turkey has good relations with the members of the Gulf Cooperation Council, especially with Saudi Arabia, Bahrain and Kuwait. We believe Turkey's strategic relations with these member countries are crucial. Moreover, we believe it is absolutely necessary for the security of the region.

Turkey is advocating for the crisis to be resolved through political dialogue. In your opinion, what is obstructing this dialogue?

First, we appreciate Turkey's position and the importance it gives to the security and stability of the region. We expect other countries to act like Turkey and to support Kuwait's mediation. Yet, the countries enforcing the blockade made some conflicting statements. For example, Bahrain's FM made some conflicting statements about Turkey and Qatar's defense relations. Some officials are claiming that they are open for a political dialogue and that they support Kuwait's intermediary position; then the Saudi FM states that dialogue is not possible unless demands are met. Qatar is always open to respectful dialogue in which all countries have an equal footing.