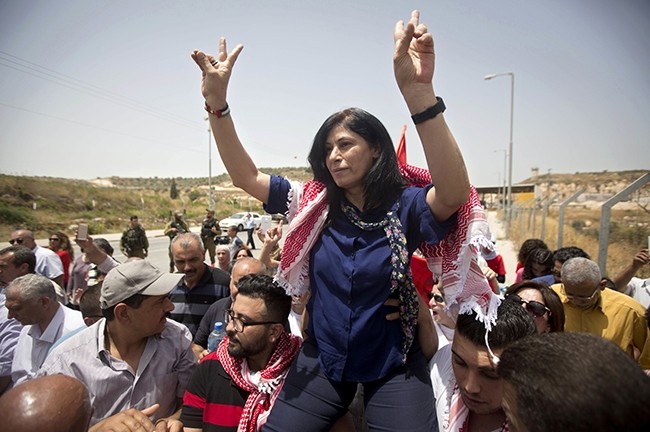 Palestinian lawmaker Khalida Jarrar is greeted by supporters after her release from an Israeli prison at the Jabara checkpoint near the West Bank town of Tulkarem, June 3, 2016. (AP Photo)
by Compiled from Wire Services Jul 03, 2017 12:00 am

Khalida Jarrar, a member of the Popular Front for the Liberation of Palestine (PFLP), was arrested from her home in Ramallah city, according to her daughter.

"At least 10 Israeli soldiers raided the house at dawn, arrested my mother and took her to an unknown location," her daughter Yafa said.

The Israeli army said Jarrar was detained on suspicion of involvement in terrorist activities and violent public disturbances.

"Her arrest had nothing to do with her membership in the Palestinian Legislative Council," the military said in a statement.

The PFLP, for its part, said Jarrar's detention "reflects the confusion of the Israeli occupation".

"The arrest follows a campaign of incitement launched by the Israeli government against PFLP and the resistance factions," it said in a statement.

Addameer, a prisoners' support and rights group, said a total of 11 people had been arrested in the raid, including Jarrar and Khitam Saafin, who it identified as chairwoman of the Union of Palestinian Women's Committees.

Jarrar was released by Israel in mid-2016 after spending 15 months in prison on charges of committing a number of "security offenses", including membership in the banned PFLP, which Israel considers a "terrorist" organization.

According to Palestinian figures, Israel is currently holding more than 6,500 Palestinians, including 13 legislators, and scores of women and children, at 24 detention centers across the country.