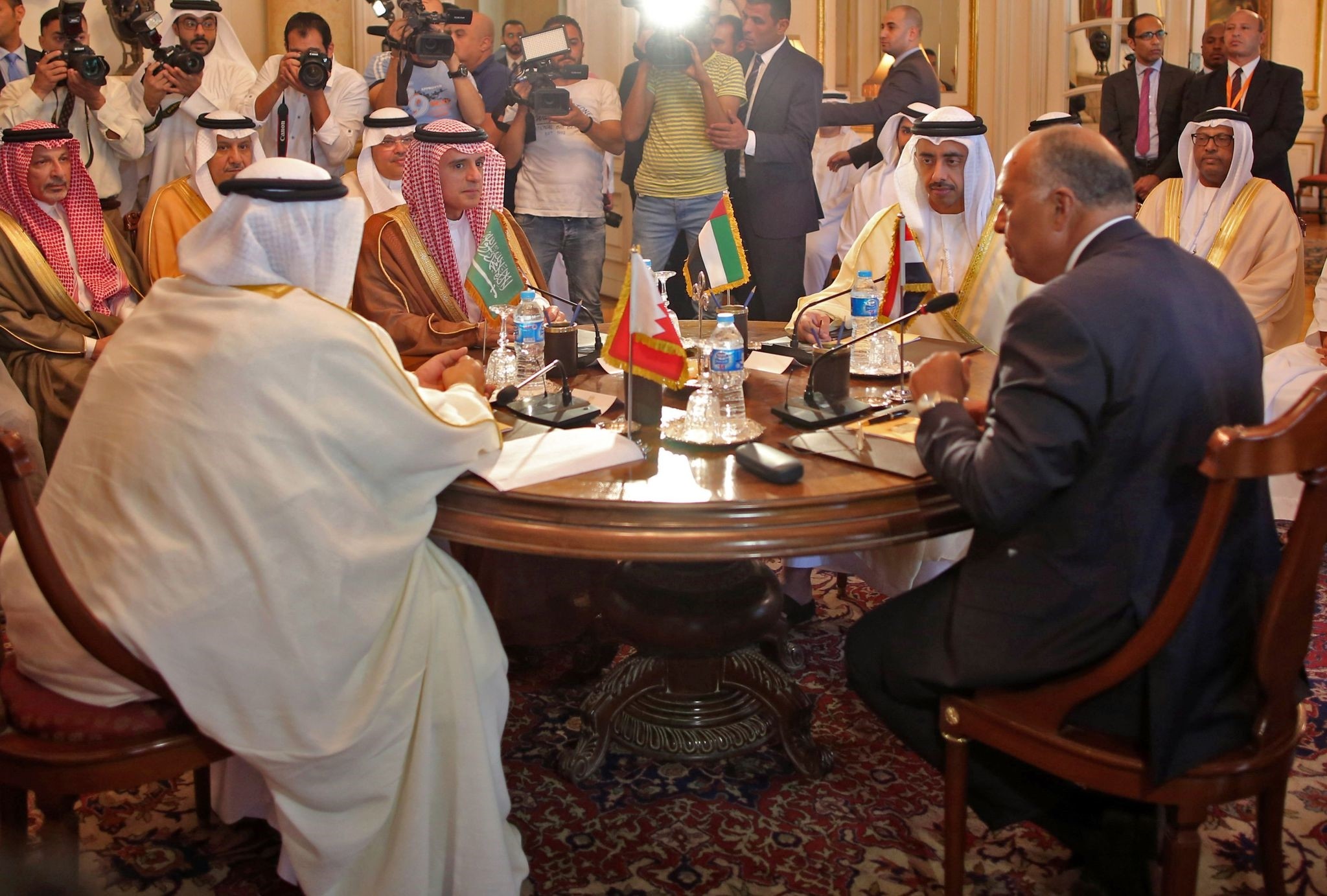 The Saudi foreign ministry said on July 5, 2017 that it had received Qatar's response to a 13-point list of demands issued on June 22 -- which include Doha ending support for the Muslim Brotherhood and closing broadcaster Al-Jazeera. (AFP Photo)
by Compiled from Wire Services Jul 05, 2017 12:00 am

Qatar's response to a list of demands by four Arab allies was "negative" and shows a lack of seriousness in dealing with the crisis, according to a joint statement by Arab foreign ministers meeting in Cairo.

"The response the four states got was overall negative and lacked any content. We find it did not provide a basis for Qatar to retreat from its policies," Egyptian Foreign Minister Sameh Shoukry said reading out a joint statement.

He also described Doha's response as a "position that reflects a failure to realize the gravity of the situation."

"The political and economic boycott will continue until Qatar changes its policies for the better," Saudi Foreign Minister Adel al-Jubeir said at a news conference.

Egypt's foreign minister, Sameh Shukri, told reporters Qatar's response to the Arab states' 13-point list of demands was "negative on the whole." It did not "lay the foundations for Qatar's abandonment of the policies it pursues. It's a position that does not realize the gravity of the situation," he added.

The ministers did not say what their next steps would be — that, they explained, would be announced after further consultations. They will meet next in Bahrain, but date has yet to be set.

"We hope wisdom will prevail and Qatar will eventually make the right decisions," added Shukri, who said the four nations were acting against Qatar within the boundaries of international law, as well as the interest to safeguard regional and international security.

Some of the rhetoric by the four ministers, however, was clearly belligerent.

The Emirati Foreign Minister Abdullah bin Zayed Al Nahyan said Qatar was only interested in "destruction, incitement, extremism and terrorism," rather than in good neighborly relations.

Shukri said Qatar's policies could not be allowed to continue and vowed that Egyptian blood would not be shed in vain, a reference to deadly attacks by militants on Egyptian army and security forces. Cairo has long accused Qatar of supporting extremists and providing refuge and financial backing for the Muslim Brotherhood, a group Egypt outlawed and branded a terrorist organization shortly after the military in 2013 ousted President Mohammed Morsi, a Brotherhood member.

The four nations issued a 13-point list of demands on June 22, giving Qatar 10 days to comply. They later extended the deadline by another 48 hours at the request of Kuwait, which is trying to mediate the crisis. That second deadline expired early Wednesday morning.

On Tuesday, intelligence chiefs from the four Arab countries met in Cairo, likely to discuss the crisis, according to Egypt's state MENA news agency.

Qatar's response was not made public but it had previously called the demands — which include shutting down its Al-Jazeera satellite news network, closing a Turkish military base in the country and paying restitution — an affront to its sovereignty.

The nations could impose financial sanctions or force Qatar out of the Gulf Cooperation Council, a regional body known as the GCC that serves as a counterbalance to Iran.

Some Arab media outlets have suggested a military confrontation or a change of leadership in Qatar could be in the offing, but officials have said those options are not on the table.

Sheikh Abdullah, the UAE's foreign minister, has also kept up the pressure on Qatar.

Though Qatar Airways' routes over its neighbors have been closed, along with the country's sole land border with Saudi Arabia, Doha has been able to import food and goods from other countries. Its economy, fueled by its natural gas exports, seems to be weathering the crisis though there has been pressure on its stock market and currency.

The credit ratings agency Moody's warned early Wednesday that it had set Qatar's economic outlook to negative over the crisis.

"Depending on the duration and potential further escalation of tensions, the dispute could negatively affect Qatar's economic and fiscal strength. Absent a swift resolution, economic activity will likely be hampered by the measures imposed so far," Moody's said.

He said the Arab states' demand for a Turkish military base in Qatar to be closed shows "a lack of respect toward us and Qatar." ''The Americans are also there, with 9,000 soldiers, and so are the French. ... Why are the Saudis disturbed by us and not by that? This is unacceptable."

At the United Nations, spokesman Stephane Dujarric said later Wednesday that Secretary-General Antonio Guterres has sent U.N. political chief Jeffrey Feltman to the Persian Gulf to discuss how the world organization could help resolve the crisis.

Feltman has already been to the United Arab Emirates and was in Kuwait on Wednesday, Dujarric said, adding that he would also be traveling to Qatar's capital, Doha.