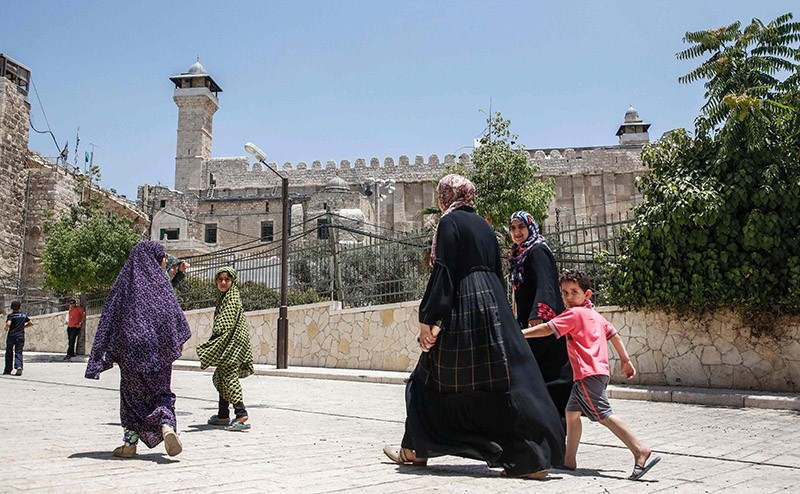 Palestinians walking by outside the Cave of the Patriarchs, also known as the Ibrahimi Mosque, which is a holy shrine for Jews and Muslims, from the Palestinian side in the heart of the divided city of Hebron in the West Bank. (AFP Photo)
by Compiled from Wire Services Jul 07, 2017 12:00 am

The UNESCO World Heritage committee on Friday put the West Bank city of Hebron's Old Town on its list of world heritage in danger, a decision that drew outrage from Israel.

The decision was taken in Krakow, Poland, on a proposal from the Palestinian side. Israel said that the decision's wording ignored its historic links to the city. The Israeli ambassador to UNESCO left the session.

The secret vote was 12-3 with six abstentions.

The decision draws attention to the situation in Hebron, which has sites that are holy for both Jews and Muslims. It also obliges the World Heritage committee to review its situation every year. By the same decision, Hebron's Old Town was also put on UNESCO World Heritage list.

Naftali Bennett, Israel's Education Minister, said in a statement that "Jewish ties to Hebron are stronger than the disgraceful UNESCO vote."

The Palestinians hailed the decision.

"This vote is a success for the diplomatic battle fought by Palestine on all fronts, in the face of Israeli and American pressure on member states," the Palestinian foreign ministry said in a statement.