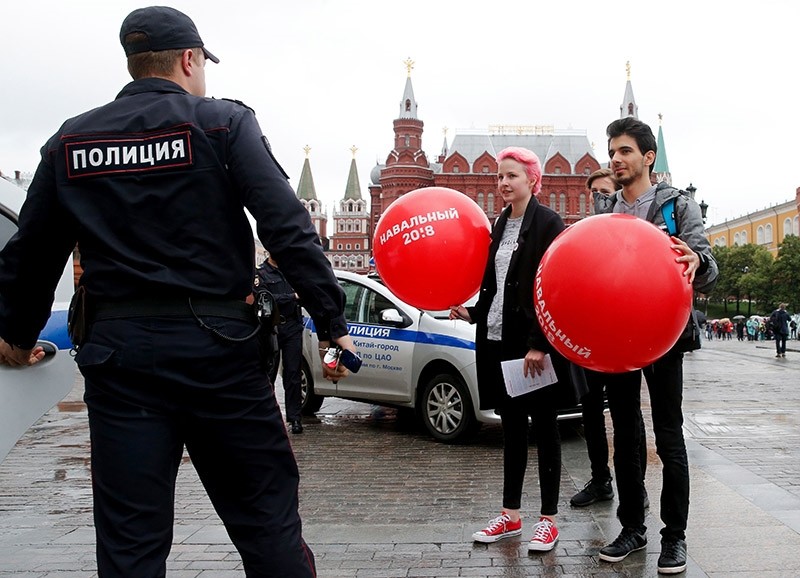 Supporters of Russian opposition leader Alexei Navalny speak with police officers during an unauthorised action in central Moscow on July 8, 2017. (AFP Photo)
by Jul 08, 2017 12:00 am

At least 70 supporters of Russian opposition leader Alexei Navalny were arrested in Moscow on Saturday along with many others across the country as they distributed campaign materials, a pro-democracy group said.

They were detained for "disturbing public order," Moscow police said in a statement.

Around 30 more of Navalny's backers were arrested in other Russian cities, according to OVD-Info, an NGO, a day after he finished a 25-day jail term for organizing unauthorized protests against President Vladimir Putin's rule.

"I was arrested while I was in a car. In the boot was a balloon with Navalny's name on it," tweeted Nikolai Kassiane, a Moscow-based campaign organizer for Navalny.

Navalny, who hopes to stand against Putin in next year's presidential election, has twice been jailed in recent months for organizing sizeable anti-corruption rallies banned by the authorities and which saw scores of arrests.

Navalny insists he will keep up his fight and has been traveling around the country promoting his election bid, although electoral authorities say a suspended prison sentence makes him ineligible to run for office.

He has been assaulted a number of times -- one attack caused a serious eye injury -- and has faced a number of legal obstacles since announcing his bid for the presidential race in December.

Putin has yet to confirm whether he will seek re-election himself.

The Russian leader was curt when asked about Navalny on Saturday on the sidelines of the G20 meeting in Hamburg, Germany.

"I believe we can have a dialogue... with people who propose constructive, even if critical, positions.

"But as regards those who only try to draw attention to themselves, then there is no point in dialogue," said Putin.