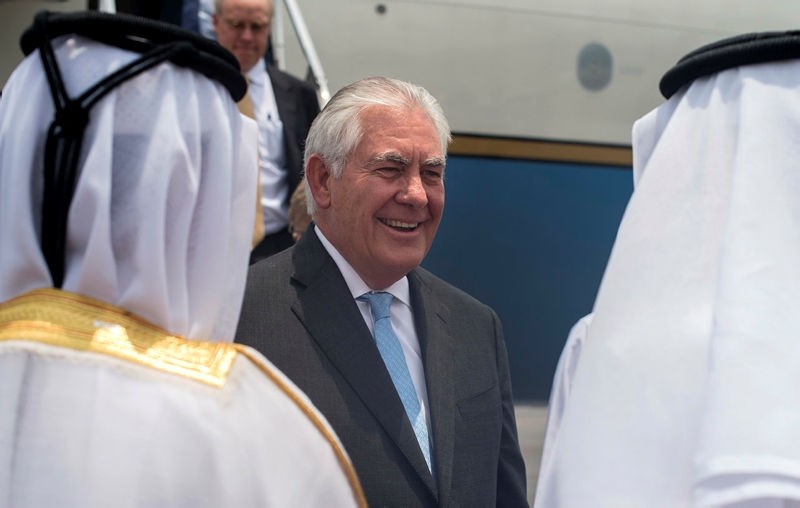 Foreign ministers of the four Arab countries boycotting Qatar will meet with US Secretary of State Rex Tillerson in Jeddah, in the first major push by the United States towards finding a solution for the Gulf crisis.

Foreign ministers of Saudi Arabia, the United Arab Emirates, Bahrain and Egypt will meet with Tillerson on Wednesday in the Saudi Arabian coastal city.

The meeting will "explore their feelings and explore options of how we might move this forward. I would not comment on any expectations for a timetable now because these are discussions that are still ongoing," Tillerson told reporters in Doha.

Egypt's Foreign Ministry said the Jeddah meeting "will assert the position of the four countries and the measures they took against Qatar."

"The meeting is in line with the four countries' keen interest in enhancing coordination and underscoring solidarity on ways to deal with Qatar in the future," Foreign Ministry spokesman Ahmed Abu Zeid said.

Tillerson landed in the Qatari capital Doha earlier Tuesday, as part of a regional tour to discuss the Gulf dispute, which began in June when the four Arab countries cut diplomatic ties and transportation links with Qatar.

He began the tour on Monday in Kuwait, which has been mediating in the crisis.

He said he held "a good trilateral exchange around the conflict" with Qatari and Kuwaiti diplomats.

During his visit, the United States and Qatar signed an agreement Tuesday aimed at boosting efforts to combat terrorism.

Tillerson denied the agreement is connected to the current diplomatic crisis in the Gulf, saying it comes after more than a year of discussions.

Qatari Foreign Minister Mohammed bin Abdulrahman Al-Thani echoed Tillerson, saying: "It has nothing related directly or indirectly to the recent crisis and the blockade imposed against Qatar."

On June 5, Saudi Arabia, the United Arab Emirates, Bahrain and Egypt cut diplomatic ties and transportation links with Qatar. The Arab quartet threatened to impose further sanctions on Qatar after a list of 13 demands was rejected by Doha.