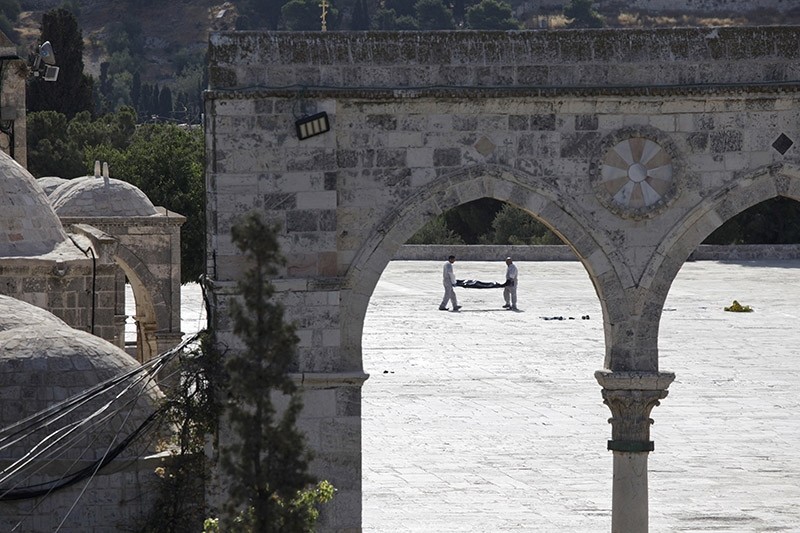 Israeli police forensic experts carry the body of a Palestinian at the scene of an attack in the Al Aqsa Mosque compound in Jerusalem's Old City, Friday, July 14, 2017 (AP Photo)
by Daily Sabah with Agencies Jul 14, 2017 12:00 am

Three gunmen were killed after opening fire at police near Jerusalem's holiest site Friday, killing two Israeli officers and injuring another one.

The gunmen arrived at the sacred site, known to Muslims as the Noble Sanctuary and to Jews as Temple Mount, and walked towards one of the Old City gates nearby, police spokeswoman Luba Simri said.

"When they saw policemen they shot toward them and then escaped towards one of the mosques in the Temple Mount compound," Simri said. "A chase ensued and the three terrorists were killed by police."

She said three firearms were found on their bodies.

Spokeswoman Luba Samri said the attack happened Friday near a gate of Jerusalem's Old City and the shooters then fled toward a mosque at the nearby holy site. Police gave chase and they were shot dead at the compound.

"The president (Abbas) expressed his strong rejection and condemnation of the incident at the blessed Al-Aqsa mosque and his rejection of any act of violence from any side, especially in places of worship," official Palestinian news agency WAFA said.

"Israeli Prime Minister Netanyahu ... called for calm on all sides."

Abbas has repeatedly called for non-violent resistance to Israel's occupation

The holy compound is known to Jews as Temple Mount and to Muslims as Noble Sanctuary. It is the holiest site to Jews and the third holiest in Islam.

Mobile phone video footage aired by Israeli media showed several policemen chasing a man and shooting him down at the site, which is a popular place for foreign tourists to visit. Israeli authorities are still working to identify the attackers, police spokesman Micky Rosenfeld said.

Meanwhile, speaking to Daily Sabah, Ambassador of Israel to Turkey Eitan Na'eh described the incident as a 'terror attack.' The attackers smuggled guns into the Noble Sanctuary and came out of the holy place and took selfies just before carrying out the attack. Before taking the selfies in front of the Dome of Rock, they said "I will have a better smile tomorrow" in Arabic and then one of them pretended to be wounded and attacked police." Ambassador Na'eh noted that the attackers targeted the holy place. "It's one of the holiest places for all religions, including Islam" Na'eh said, adding that security forces are carrying out operations to look for additional weapons in the Noble Sanctuary.

Tensions are often high around the marble-and-stone compound that houses the Aqsa Mosque and the golden Dome of the Rock. It is managed by Jordanian authorities and is adjacent to the Western Wall, the holiest site where Jews are permitted to pray.

Police said Friday prayers for Muslims would not be held at the site following the attack, for the first time after 17 years.

A wave of clashes that began in 2015 has slowed but not stopped. At least 255 Palestinians and one Jordanian citizen have been killed since the violence began.

Israel annexed East Jerusalem, where the Old City and the holy compound are located, after the 1967 Middle East war and regards all of Jerusalem as its capital, a move that is not recognized internationally.

Palestinians want East Jerusalem as the capital of the state they want to establish in the West Bank and Gaza Strip.

The last, U.S.-led attempt to broker peace between the Israelis and Palestinians broke down in 2014.