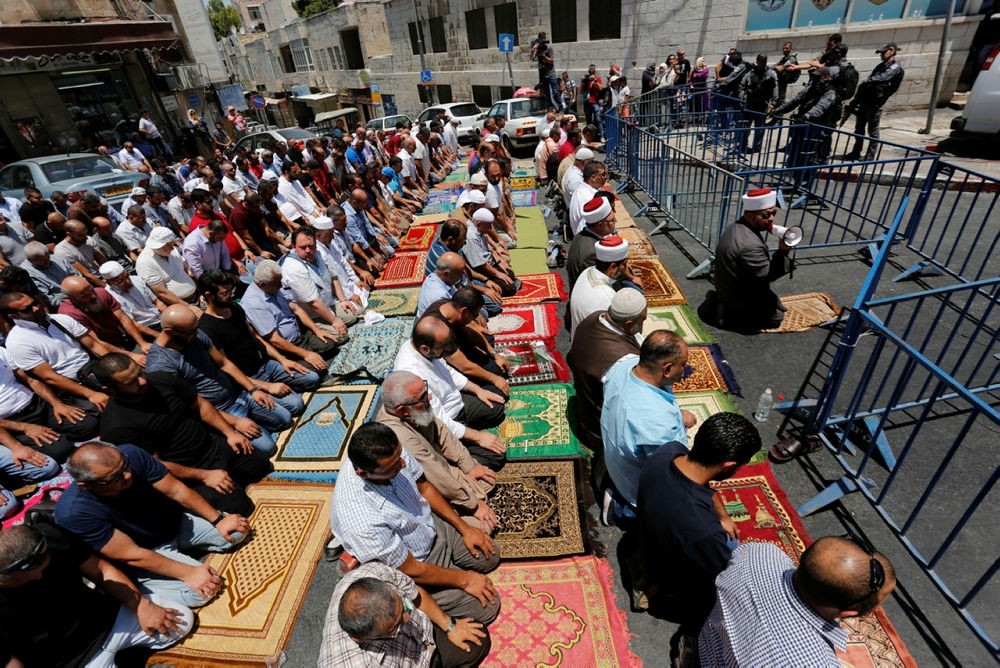 Palestinian Muslims pray outside the old city walls after Israeli police block access to the Al-Aqsa mosque in Jerusalem on Friday, July 14, 2017. (AA Photo)
by Daily Sabah Jul 14, 2017 12:00 am

For the first time in 50 years, Friday prayers were not observed at the Al-Aqsa mosque in Jerusalem after Israel closed the compound following a gun attack that killed two Israeli policemen.

Palestinian Muslims gathered outside the Old City walls prayed on mats that they laid on the streets and protested the Israeli decision. The crowd later dispersed peacefully.

"Israeli police detained my father in a violent manner and took him to an unknown destination," Omar, son of the grand mufti, said.

The head of Turkey's Presidency of Religious Affairs (DİB), Mehmet Görmez criticized the Israeli decision to close down the mosque.

Jordan, the custodian of the compound, also urged Israel to "immediately reopen" the mosque and denounced the violation of rules at Al-Aqsa.

The last time Friday prayers were not held at the mosque was in late August 1969, a day after Michael Rohan, an Australian, set the mosque on fire.

Sacred to Muslims, Jews and Christians, Jerusalem is home to the Al-Aqsa Mosque, which for Muslims represents the world's third-holiest site.