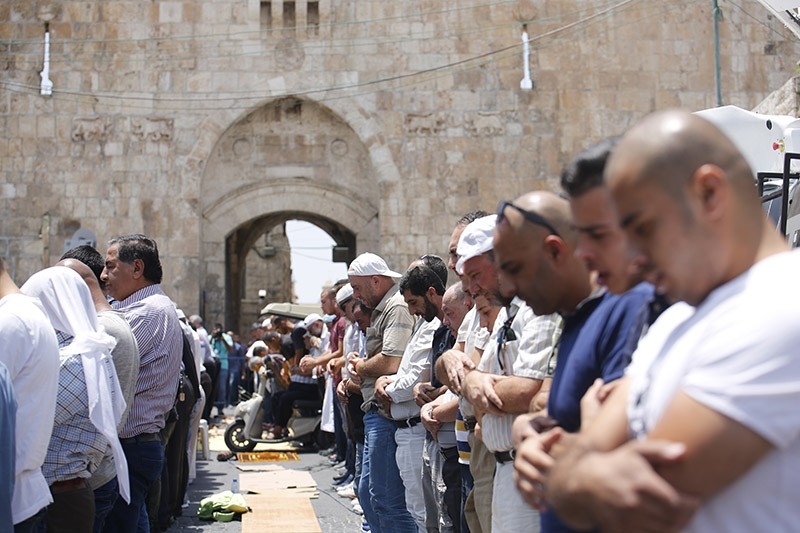 Palestinians packed the narrow alleyways leading to Jerusalem's Al Aqsa mosque Monday, as hundreds prayed at the threshold, refusing to enter for a second day in protest against new Israeli security measures.

Mosque officials told worshipers not to pass through new metal detectors set up at the gates when the holy site reopened Sunday following a two-day closure in response to a deadly shooting inside the compound before Friday prayers.

Palestinians say the security measures change the delicate balance of prayer and visiting rights at the site, known as the status quo.

Mustafa Barghouti, leader of the Palestinian National Initiative, was among the worshipers who protested at Lions Gate, a major entrance to the Old City, after midday prayers.

"They will not succeed, we will be back for the next prayer and the prayer after that," he said.

"This will be the beginning of a popular Palestinian uprising," Barghouti said, calling on Arab countries to place sanctions on Israel in response.

Muslim worshipers have congregated at two of the main entrances to the mosque for each of the five daily prayers as part of the ongoing protests.

The site is considered exceptionally holy by both Muslims and Jews, who call it the Temple Mount.

Israel closed the holy site on Friday after two Israeli police officers and three Palestinians were killed in a shootout, saying they were searching for weapons.

The attack was condemned by Palestinian President Mahmoud Abbas but the Palestinian Authority has also since criticized Israel's reaction.

"We will also install security cameras on poles outside the [Al-Aqsa compound] but which give almost complete control over what goes on there. I decided that as of tomorrow, in the framework of our policy of maintaining the status-quo, we will gradually open the Temple Mount, but with increased security measures," he said.

This week Friday prayer was not observed at the Al-Aqsa mosque in Jerusalem for the first time in 50 years after Israel closed the compound following a gun attack that killed two Israeli policemen.

Jordan, the custodian of the compound, also urged Israel to "immediately reopen" the mosque and denounced the violation of rules at Al-Aqsa.

The last time Friday prayers were not held at the mosque was in late August 1969, a day after Michael Rohan, an Australian, set the mosque on fire.

Israel occupied East Jerusalem during the 1967 Middle East War. It later annexed the city in 1980, claiming all of Jerusalem as the Jewish state's "eternal" capital, a move never recognized by the international community.

Sacred to Muslims, Jews and Christians, Jerusalem is home to the Al-Aqsa Mosque, which for Muslims represents the world's third-holiest site.