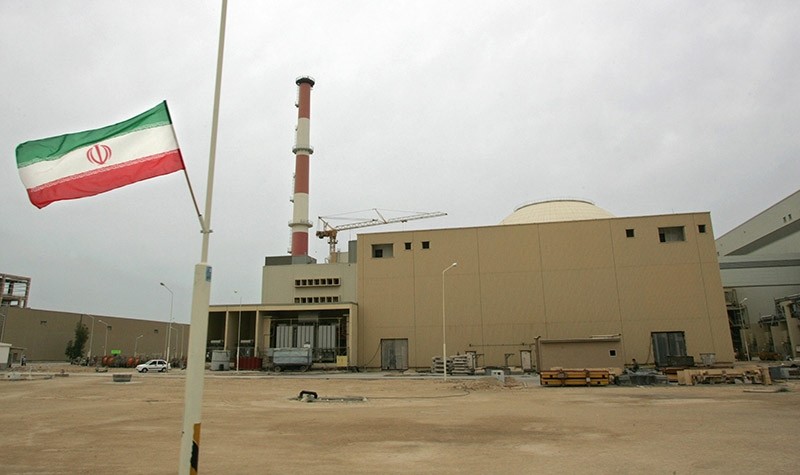 File picture dated April 3, 2007 shows an Iranian flag outside the building housing the reactor of the Bushehr nuclear power plant in the southern Iranian port town of Bushehr, 1200 Kms south of Tehran. (AFP Photo)
by Compiled from Wire Services Jul 18, 2017 12:00 am

The Trump administration certified Monday that Tehran had met the terms of the nuclear deal signed in 2015, but said Iran was "in default of the spirit" of it.

President Donald Trump and Secretary of State Rex Tillerson believe Iran's activities undermine the intent of the agreement and that Iran is "unquestionably in default of the spirit of the [deal]," senior administration officials told reporters at a briefing late Monday.

Trump has been a vocal critic of the deal, which was meant to constrain Tehran's ability to make nuclear weapons for at least 15 years and which was reached between Iran, the five permanent members of the U.N. Security Council and Germany after years of talks.

While campaigning for the presidency last year, Trump called it "catastrophic - for America, for Israel, and for the whole Middle East."

During Monday's telephone briefing, one official said Iran had in the past taken advantage of the Obama administration's "permissive view," citing its use of centrifuges as an example.

"We have determined that we need to approach those things more stringently to ensure that Iran is complying with a stricter interpretation of what the [deal] requires," the official said.

"We certainly take every opportunity we can to identify areas of ambiguity to resist Iranian attempts to push the envelope of what they are doing under deal," the official continued.

The official added that Iran had "a well established strategy of trying to get away as much as they are allowed to get away with."

Meanwhile, Iran's foreign minister said the government has received "contradictory signals" from the Trump administration and doesn't know how to interpret them, but he held open the possibility of talks and improved relations with the United States.

In a wide-ranging session at the Council on Foreign Relations, Mohammad Javad Zarif said he hasn't communicated with Secretary of State Rex Tillerson. But he said "it doesn't mean that there can't be (communication), because the possibilities for engagement with regard to the nuclear deal has always been open."

Zarif is in the United States to speak Tuesday at a high-level meeting assessing progress toward meeting U.N. goals for 2030 to combat poverty, achieve gender equality, promote economic development and good governance, and preserve the environment.

He answered questions at the council ahead of the State Department announcement.

Zarif said the International Atomic Energy Agency, "which is hardly a sympathizer for Iran," has verified its compliance with the agreement.

But unfortunately, he said, the U.S. has not complied, and the six parties to the agreement will be meeting in Vienna on Friday to examine Iran's complaints about the U.S. failure to carry out its obligations.

The key issue with the United States, he said, is over sanctions against Iran that the agreement requires to be lifted and the sanctions that remain on Iran over human rights, terrorism and other issues.

Zarif said this "creates the impression in Iran that the United States hostility toward Iran will never end."

But he left open the possibility of changing that perception, saying: "I think that can be remedied."

Responding to a question about whether Iran has received any signals from the Trump administration, positive or negative, Zarif said: "We receive contradictory signals. So we don't know which one to interpret in what way."

Zarif said that under the nuclear deal, Iran is committed never to produce nuclear weapons and to have the IAEA impose "the most stringent control measures." He also cited Iran's vote on July 7 in favor of the first-ever U.N. treaty to ban nuclear weapons, which was approved by 122 countries.

Asked about Americans in detention in Iran, including a Chinese-American graduate student at Princeton recently sentenced to 10 years in prison for allegedly "infiltrating" the country and sending confidential material abroad, Zarif stressed the independence of his country's judiciary.

But he added: "As foreign minister, I always try on humanitarian grounds to help."