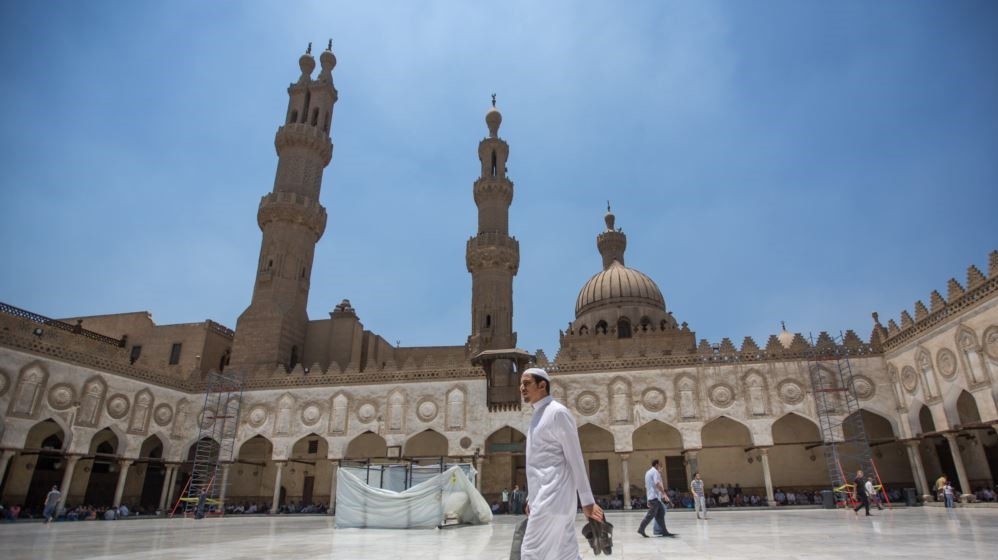 Muslims attend Friday prayers in Al-Azhar mosque, in Islamic Cairo, one of the oldest mosques in the country and an attraction for many students and scholars interested in Islam, in Cairo, Egypt. (AP Photo)
by Associated Press Jul 19, 2017 12:00 am

Egyptian authorities transferred scores of detained students from China's Uighur community to a massive prison complex in Cairo on Wednesday for interrogation alongside Chinese officials, students and activists from the ethnic minority said.

Egypt appears to be assisting China in a crackdown on the group as Cairo looks to Beijing as a key ally and source of much-needed investment, including in mega-projects like the construction of a new capital and an expansion of the Suez Canal.

Egyptian authorities in coordination with Beijing have detained some 120 students this month, with at least 80 still held, activist Abduweli Ayup said from Turkey. Others put the total figure near 200.

Chinese authorities have been waging a wide-scale security crackdown in Xinjiang, in China's far west, which officials say is necessary to curb extremism. Beijing is also reportedly seeking the immediate return of Uighurs studying abroad.

Overseas Uighurs and human rights groups say the measures have turned Xinjiang into a police state, with widespread arbitrary detentions and invasive surveillance.

The detentions in Egypt underline Beijing's determination to extend its reach abroad to a popular destination for religious study among China's Muslims, many of whom attend the prestigious Al-Azhar University in Cairo, the seat of Sunni Islam.

Uighur students who have gone underground in Egypt say friends inside the notorious Tora prison told them that police are collecting students who were detained elsewhere and bringing them there for possible deportation at Beijing's request.

"The Egyptian Interior Ministry is gathering all the detained Turkistani students in Egypt from different police stations and airports and is transporting them all to Tora prison, and is starting to interrogate the students before Chinese investigators," they said in an Arabic-language statement. Turkistan refers to an area in central Asia that includes the Uighurs' native Xinjiang province, and that separatists have sought as a state for decades.

The broad sweep in Cairo included raids at restaurants, apartments and a supermarket. On July 1, a masked SWAT team stormed a Uighur restaurant and arrested nearly 40 Uighurs inside, according to witnesses and activists.

Neither the Egyptian Interior Ministry nor the Chinese Embassy responded to requests for comment, although a Foreign Ministry spokesman in Beijing had previously acknowledged the detentions by saying the individuals would receive consular visits. He gave no further details.

A message in the Uighur language circulated by activists on social media and signed by a woman who identified herself only as "the wife of Qari" said that she had been allowed to see her detained husband and that his and the students' condition was dire.

"The police from China are forcing them to accept their 'crime' and they are not getting enough food to eat," she said, adding that some 10 students were being held in Cairo's Ain Shams detention center. Students have also reported fellow Uighurs being held in other police stations across the sprawling Egyptian capital.

Videos shared on social media earlier this month purportedly showed more than 70 Uighurs sitting on a floor in a government building and others being driven in a truck in handcuffs. Egyptian officials denied Uighurs were being held at Cairo's international airport for deportation at the time but declined to comment further.

It was not possible to independently verify the videos or the woman's statement.

Lucia Parrucci, a spokeswoman for the Unrepresented Nations and Peoples Organization, a Brussels-based advocacy group, said that some 150 students are at immediate risk for deportation to China, where they face immediate imprisonment, and where some of their families have been detained to encourage their return.

"We have learned that many of the students have been arrested directly at the airport upon their return and sent to re-education camps," she said. "None of them have been able to see family members and no information was provided to their families about their whereabouts."

Egypt has itself faced widespread allegations of human rights violations since the military overthrew an elected president in 2013. Egyptian police have arrested thousands of dissidents, holding many without charge. Egypt is also battling an increasingly powerful Daesh-led insurgency in the northern Sinai Peninsula.

Egypt has held up Al-Azhar as a bastion of moderate Islam, but that reputation could be undermined by its raids against the Uighurs under the banner of Chinese-branded anti-terrorism efforts, as most Uighurs study there.