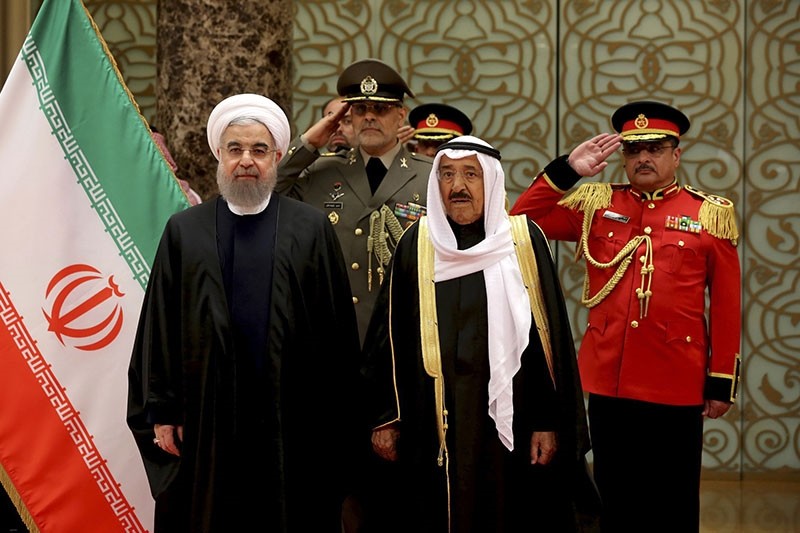 Kuwait will shut down Iran's cultural, military and trade offices at the embassy and decrease the number of Iranian diplomats in the country after the emirate's top court convicted an alleged terror cell of links to the Islamic republic, the foreign ministry said.

According to Kuwaiti diplomatic sources speaking to Anadolu Agency, who asked to remain anonymous, the number of Iranian diplomats in Kuwait will be decreased from 14 to nine, and the diplomats will be granted 45 days to leave the country. A senior government official, speaking on condition of anonymity, told AFP around 15 diplomats were ordered to leave. It was not immediately known if the Iranian ambassador is among the diplomats ordered to leave, however, Iran's ISNA news agency reported that Kuwait ordered Iranian ambassador to leave country within 48 days.

The Kuwaiti reaction is linked to a spying and terrorism case launched back in 2015, involving suspects - one Iranian and the rest Kuwaiti - with alleged ties to Iran's Revolutionary Guard and Iran-backed Hezbollah militant group. The suspects were convicted by a lower court and last month Kuwait's supreme court sentenced the mastermind of the cell to life in jail and condemned 20 others to various prison terms.

The suspects in Abdali case were released pending trial, and they are claimed to have escaped to Iran.

"The government of the state of Kuwait decided to take actions in accordance with diplomatic norms and in abidance with the Vienna conventions with regards to its relationship with the Islamic Republic of Iran," following the court ruling, acting Information Minister Sheikh Mohammad al-Mubarak al-Sabah said.

The row comes at a time when Kuwait is trying to mediate an end to the Gulf's worst diplomatic crisis in years, after Saudi Arabia and its allies cut ties with Qatar over accusations it is too close to Iran and funds extremists.

The Kuwaiti newspaper Al-Seyassah reported on Monday that 14 of the cell's 26 members had fled to Iran by sea.

They were convicted by a lower court early last year but acquitted on appeals several months later and set free.

The supreme court, whose rulings are final, overturned their acquittal on June 18 and sentenced them to between five and 15 years in prison.

Kuwait's interior ministry confirmed on Tuesday that the 14 men were on the run but it said that they had not left the country through official exit points.

The cell was busted in August 2015 and large quantities of arms, ammunition and explosives were seized from them, according to the Kuwaiti authorities.

Kuwaiti courts convicted them of working for Iran's Revolutionary Guards and Hezbollah. They were also convicted of smuggling explosives from Iran.

The only Iranian member of the cell was sentenced to death in absentia by the lower court early last year.

In February, Iranian President Hassan Rouhani visited Kuwait City a month after the emirate launched a dialogue with Iran in a bid to normalize Gulf-Iran relations.

In March 2011, a Kuwaiti court condemned four people of forming a spy cell for Iran. That led to the expulsion of ambassadors by the two countries but they returned a few months later.

Around a third of Kuwait's native population of 1.35 million is Shiite.