US calls on Israel, Jordan to maintain status quo at Al-Aqsa mosque 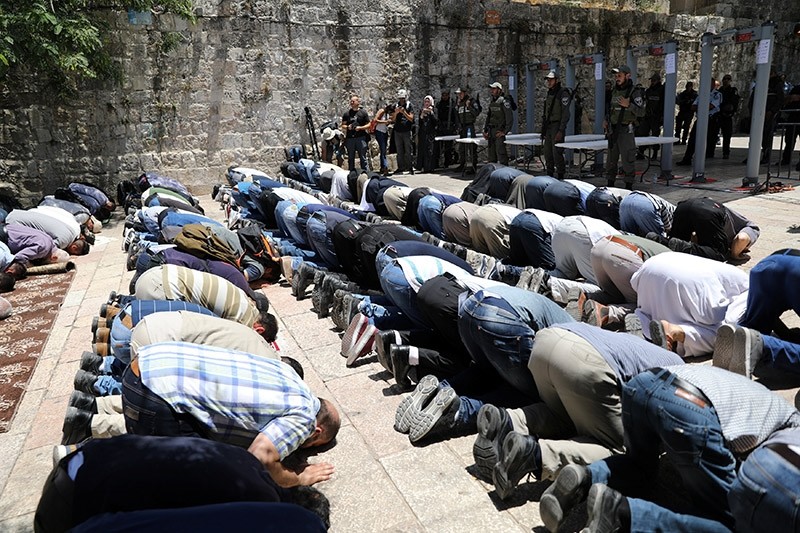 Palestinians pray as Israeli police officers look on by newly installed metal detectors at entrance to compound known to Muslims as Haram al-Sharif (Noble Sanctuary) and to Jews as Temple Mount in Jerusalem's Old City, July 16, 2017. (Reuters Photo)
by Anadolu Agency Jul 20, 2017 12:00 am

The U.S. has urged Israel and Jordan to reduce growing tension in Jerusalem following new Israeli restrictions on Palestinians at Al-Aqsa mosque.

"The United States is very concerned about tensions surrounding the Temple Mount/Haram Al-Sharif, a site holy to Jews, Muslims, and Christians," the White House said in a statement late Wednesday.

Israeli authorities closed down the Al-Aqsa compound and canceled the weekly Friday prayers for the first time in nearly five decades following a shootout that left three Palestinians and two Israeli policemen dead near the flashpoint holy site in east Jerusalem.

On Wednesday, Israeli soldiers wounded nine Palestinians and detained four others during protests against new Israeli measures at the Al-Aqsa mosque that restrict entry of Palestinians.

Protests began on Sunday after the mosque's leadership called on worshippers to boycott new metal detectors installed at the mosque's entrances.

Israel has defended the controversial move, claiming they are no different from security measures at other holy sites around the world.

"U.S. calls upon the state of Israel and the Hashemite Kingdom of Jordan to make a good faith effort to reduce tensions and to find a solution that assures public safety and the security of the site and maintains the status quo," the White House said.

The U.S. will continue to closely monitor the developments, it added.

Al-Aqsa Mosque is the third-holiest site in Islam after the cities of Mecca and Medina.

Israel occupied east Jerusalem during the 1967 Middle East War. It later annexed the city in 1980, claiming all of Jerusalem as the Jewish state's "eternal" capital -- a move never recognized by the international community.