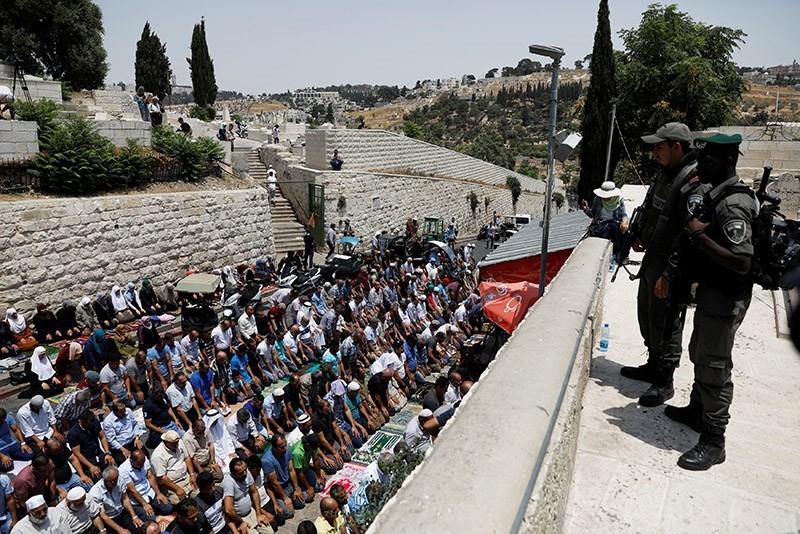 Israeli police said they were barring men under 50 from entering Jerusalem's Old City for Friday Muslim prayers as tensions rose over new security measures at a supersensitive holy site.

"Entry to the Old City and Temple Mount will be limited to men aged 50 and over. Women of all ages will be permitted," a police statement said.

Tensions have risen after Israeli police installed metal detectors at entrances to the Haram al-Sharif mosque compound, known to Jews as the Temple Mount, following an attack nearby that killed two policemen.

The move angered Palestinian and other Muslims who saw it as Israel asserting further control over the site.

On Thursday evening, police fired rubber bullets, tear gas and stun grenades to disperse protesters who, according to police, threw rocks and bottles.

Paramedics from the Red Crescent said 37 people were injured by rubber bullets, three of them seriously.

The main weekly prayers on Fridays draw the largest number of worshippers, and speculation had been mounting that Israeli Prime Minister Benjamin Netanyahu might order the metal detectors removed before this week's prayers.

But after consultations with security chiefs and members of the security cabinet, Netanyahu decided not to remove them.

An Israeli official said the security cabinet "has given police the authority to make any decision to ensure free access to holy sites while maintaining security and public order."

The decision came despite appeals from key Muslim countries, particularly Jordan, to remove the devices.

Jordan is the custodian of the Muslim shrine. Israel and Jordan have close security ties, but frequently clash over Israel's policies at the holy site.

Abbas warned that the situation at the site known to Muslims as the Noble Sanctuary and Jews as the Temple Mount was "very critical" and could spiral out of control, WAFA reported.

The Palestinian president cut short a visit abroad and returned home early Friday to deal with the escalating crisis.