Palestinians to urge int'l community to end violations at Al-Aqsa 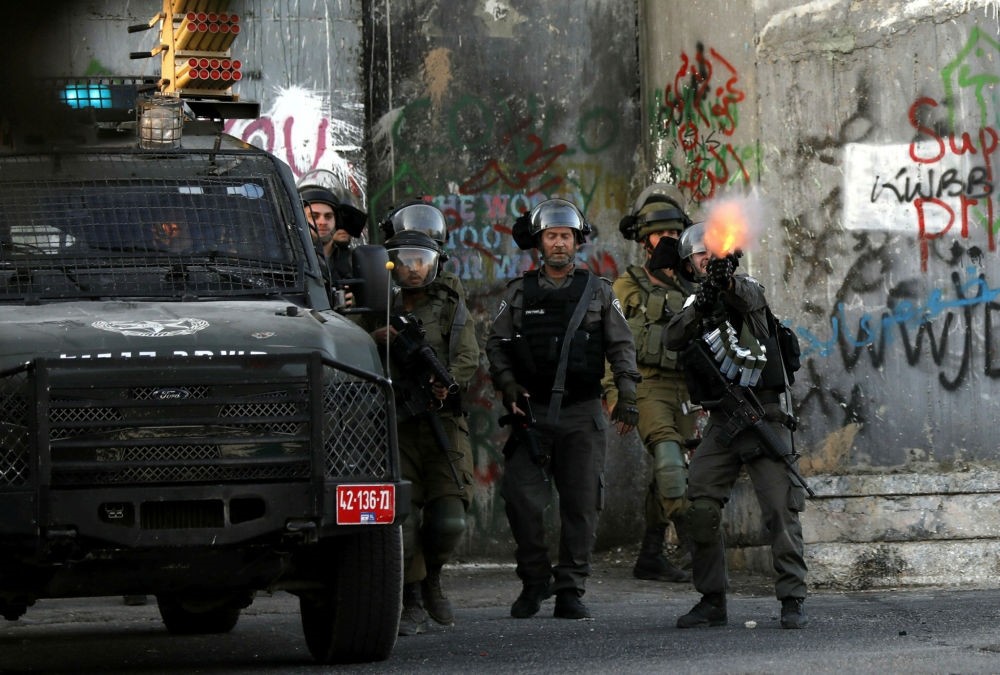 Israeli soldiers shoot tear gas at Palestinian protesters during clashes following a protest in the West Bank city of Bethlehem, July 19.
by Compiled from Wire Services Jul 21, 2017 12:00 am

After days of escalating tension over metal detectors at the Al-Aqsa compound, Palestinian authorities called on the international community to urge Israel to end violations at the holy site

Tensions remain high ahead of Friday prayers as thousands of Muslims prepares to flock to Al-Aqsa mosque, Islam's third holiest shrine. Muslim religious authorities, who say the metal detectors violate a delicate agreement on worship and security arrangements at the site, have urged Palestinians not to pass through, and prayers have been held near an entrance to the complex today as Al-Aqsa have remained closed.

Far-right members have publicly urged Israeli Prime Minister Netanyahu to keep the devices in place at the flashpoint site, but Israeli media reports said security chiefs were divided over the issue amid concerns of wider protests in East Jerusalem and the West Bank.

Meanwhile, Israeli soldiers wounded more than 50 Palestinians and detained four others during protests against new Israeli security measures at the Al-Aqsa Mosque that restrict Palestinians on entering. Witnesses say hundreds of Palestinians protested the restrictions at the Kalandia checkpoint that separates Jerusalem from Ramallah. Israeli soldiers used conventional bullets, plastic bullets and tear gas to disperse the protesters demanding the removal of the metal detectors at one of Islam's holiest sites.

Hamas' political chief, Ismail Haniyeh, on Wednesday urged Arab and Muslim countries to organize an "extraordinary summit" in the face of Israel's violation against Al-Aqsa.

"I invite all Muslims to take urgent action for Al-Aqsa mosque, whose sanctity and position is exposed to genuine danger, and I invite the leaders of Arab and Muslim countries to organize an extraordinary summit to fulfill their responsibilities," Haniyeh said in a statement. Haniyeh also called on the Muslim world for a general mobilization Friday against Israel's violations at Al-Aqsa.

Protests began Sunday after the mosque's leadership called on worshipers to boycott new metal detectors installed at the mosque's entrances after a deadly shootout last week. These new security measures have led to a wave of anger among Palestinians, who called for the immediate removal of the metal detectors.

Israel has defended the controversial move, claiming they are no different from security measures at other holy sites around the world.

Israel took the highly unusual decision to close the Al-Aqsa mosque compound for Friday prayers, leading to anger from Muslims and Jordan, the holy site's custodian. The mosque was closed and Friday prayers canceled for the first time since Israel occupied east Jerusalem in 1967 after a gunfight inside the compound on Friday morning killed two Israeli police officers and the three alleged Palestinian attackers.

Temple Mount is central to the Israeli-Palestinian conflict, with Palestinians fearing Israel may one day seek to assert further control over it. It is located in east Jerusalem, occupied by Israel in 1967 and later annexed in a move never recognized by the international community. It is considered the third holiest site in Islam and the most sacred for Jews. Jews are allowed to visit but not pray there to avoid provoking tensions.