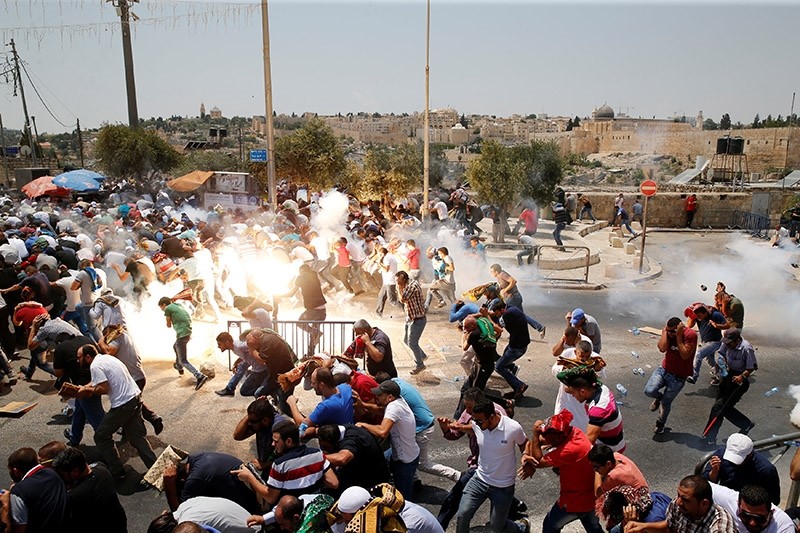 Palestinians react following tear gas that was shot by Israeli forces after Friday prayer on a street outside Jerusalem's Old city July 21, 2017. (Reuters Photo)
by Daily Sabah with Agencies Jul 21, 2017 12:00 am

Three Palestinians were killed amid clashes with Israeli police in Jerusalem after Muslim Friday prayers were held in protest outside Jerusalem's Al-Aqsa Mosque due to Israel's blockade of Islam's third holiest site.

Palestinian health ministry confirmed that 18-year-old Muhammad Mahmoud Sharf from Silwan was killed by a shot in the head in Ras al-Amud, a neighborhood in the eastern part of the city.

Pictures circulating on social media showed a man in civilian clothing holding an automatic rifle, firing at protesters from a higher position.

The second reported death of the day occurred in the A-Tur (Mount of Olives) area of east Jerusalem, according to the Palestinian health officials. Makassed Hospital in East Jerusalem identified 20-year-old Mohammad Abu Ghannam as the victim. 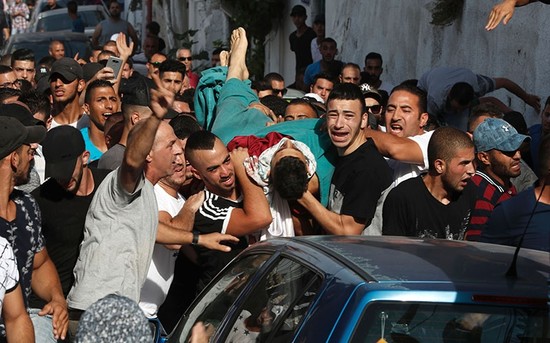 Palestinian men Ghannam's body during his funeral in the At-Tur area of east Jerusalem, on July 21, 2017. (AFP Photo)

A third Palestinian, who was identified as Mohammad Lafi, 17, was killed in clashes in Abu Dis in the occupied West Bank. The Palestinian health ministry said the victim was killed after he was shot in the heart by live bullets but provided no further details on the circumstances.

Associated Press footage showed police throwing stun grenades to disperse protesters in Ras al-Amud. An officer could be seen kicking a man as he kneed on a mat.

Protests broke out on Sunday after the mosque's leadership spoke out against the metal detectors, which were installed following a gun attack last week that left three Palestinians and two Israeli police officers dead.

The measures led to a wave of anger among Palestinians, who called for the immediate removal of the detectors. However, Israel has refused to back down, saying the detectors matched security measures at other holy sites around the world.

"We are deeply anxious and concerned," Turkish Foreign Ministry said in a written statement.

"Respecting the holiness and historical status of Al-Aqsa Mosque compound, which is situated in Eastern Jerusalem where Israel has occupied since 1967, is a humanitarian and judicial obligation," the statement said.

Turkey urged Israel to "immediately" abolish all restrictions, including the metal detectors at the entrance of Al- Aqsa mosque compound and return to the status quo, and pay attention to international community's calls.