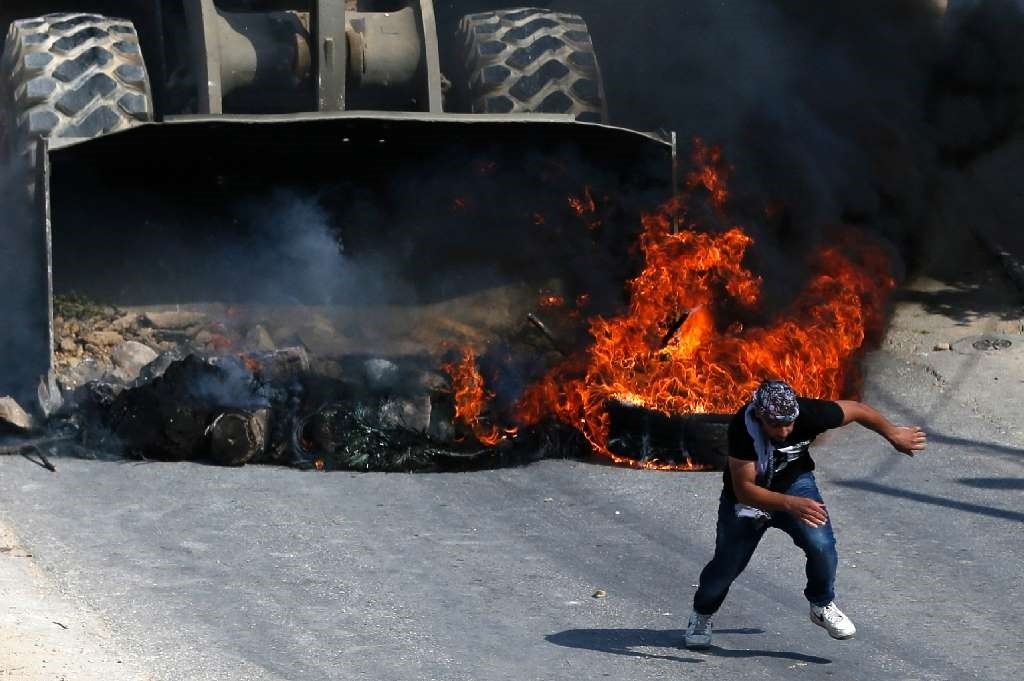 A Palestinian runs from the path of an Israeli army bulldozer during clashes in the village of Kobar, west of Ramallah, on July 22.
by Yusuf Selman İnanç Jul 24, 2017 12:00 am

Jerusalem has once again become the center of conflict, as both the Israeli-Palestinian conflict and the violation of Muslims' rights to access the third holiest site in Islam freely and safely. Since three Israeli Arabs killed two Israeli Druze policemen, the city has witnessed deadly violence as Israel refuses to remove security cameras and metal detectors installed around the Al-Aqsa Mosque after the deadly incident. The violence is not isolated to Jerusalem, as clashes are being reported in the West Bank and on the Gaza border. The wave of violence is reminiscent of previous conflicts, such as the second intifada, sparked when former Israeli Prime Minister Ariel Sharon entered the Al-Aqsa Mosque. Similarly, the killing of 29 Palestinians in Hebron by a radical Jewish settler has resulted in the division of the Ibrahim Mosque.

Unfortunately, Israel's unabashed stance towards Muslims and Islamic holy sites is fueling the violence that now encircles the two societies. In response to the killing of three Palestinian youths, an Arab resident in the West Bank stabbed three Jewish settlers to death after entering their home during the Shabbat meal. "Israel sent more troops to the West Bank on Saturday, a day after a Palestinian stabbed three members of an Israeli family to death in their home, resulting in the eruption of widespread Israeli-Palestinian clashes. On Friday evening, a Palestinian identified as Omar al-Abed scaled the fence of the Halamish Israeli settlement on the West Bank and entered the home of a family during their Sabbath dinner, killing one man and two of his adult children and wounding one woman in the home. A neighbor heard the screams and rushed to the home where he opened fire, wounding al-Abed who was taken to an Israeli hospital, according to the head of Israel's rescue service," the Associated Press (AP) reported on Saturday.

After the attack, Israel accused Hamas and Palestinian Authority President Mahmoud Abbas of inciting violence. Rejecting the claims, Abbas declared that he has frozen contacts with Israel. "Amid mounting pressure to respond to the dispute over the mosque compound, Palestinian President Mahmud Abbas announced lateFriday that he was freezing contacts with Israel," the Agency-France Press said.Moreover, Israel's audacious approach to Palestine's demands, while turning a blind eye to international reactions, has always been a factor in further escalation of the conflicts. Despite Turkey's repeated calls for de-escalating tension and demands that Israel refrain from intervening in the status quo at the Al-Aqsa Mosque, Israel continues to ignore the calls. Furthermore, the issue of Jewish settlements, despite the fact that both the U.S. and the EU have warned Israel that the move is both illegal and a violation of Palestinians' housing rights, the warnings have fallen on the deaf ears of the Israeli government.

Israel seems confident that there will be no international sanctions implemented - even if it attempts to divide Al-Aqsa Mosque, as Palestinians claim. Already ongoing conflicts in the region, the devastating war in Syria and terrorist organizations like Daesh and the PKK's Syrian branch, the Democratic Union Party (PYD), are all factors that allow Israel to benefit from the chaotic situation in the Middle East. Although Al-Aqsa is holy to all Muslims and not just a matter for Palestinians, there is no voice being raised against Israel's aggression or its arbitrary policies. The recent crisis over Qatar exemplifies the situation aptly since Israel has been developing very close and strong relations with the United Arab Emirates (UAE), while the latter and its regional allies remain silent over the Al-Aqsa issue. Iran has always been outspoken over the Palestinian issue, but its involvement in the Syrian war and the mobilization of Shiite groups, primarily Hezbollah, against the opposition and civilians have considerably undermined its credibility in the Muslim world. At the same time, Turkey's compulsory fight against Daesh, the PYD and the Gülenist Terror Group (FETÖ) has become a major priority of Turkish authorities, although the highest statesmen, including President Recep Tayyip Erdoğan, have telephoned both Israelis and Palestinians.