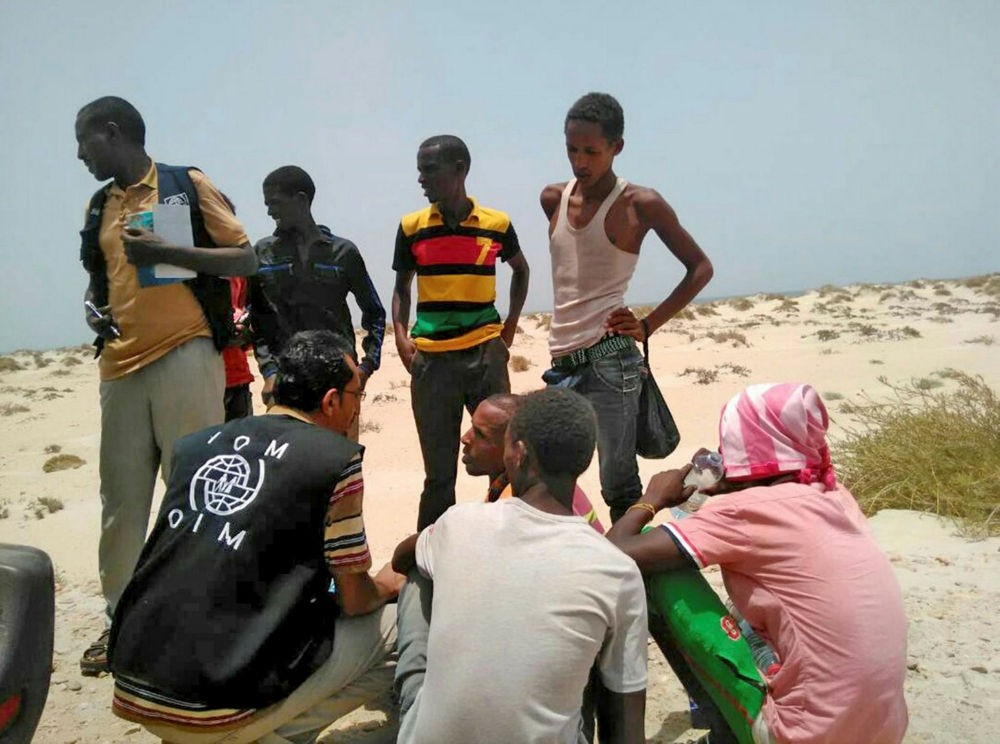 IOM staff assist Somali and Ethiopian migrants who were reportedly forced into the sea by smugglers, on a beach in Shabwa, Yemen, Aug. 10.
by Compiled from Wire Services Aug 11, 2017 12:00 am

More migrant deaths were reported off the coast of Yemen after smugglers forced them from a boat in the second such drowning in two days, the U.N. migration agency said

Some 180 young Ethiopian and Somali migrants, many weakened by hunger and drought in their home countries, were forced from a boat into rough seas off Yemen by smugglers Thursday and 55 were presumed to have drowned, the U.N. migration agency said.

It was the second such incident in as many days off Shabwa province in southern Yemen, where 50 teenage African migrants were "deliberately drowned" on Wednesday by a smuggler who forced 120 passengers off his boat, the International Organization for Migration (IOM) said.

"This is shocking and alarming," said Laurent de Boeck, the IOM's chief of mission in Yemen. "They were dropped at sea but closer to the beach this time."

Smugglers were pushing migrants into the sea away from the mainland so as to avoid encountering possibly armed groups on shore in the war-torn country. They were then going back to pick up more migrants.

"We have seen five bodies and can confirm five dead ... Fifty are still missing from this incident, so 55 are presumed dead," IOM spokeswoman Olivia Headon told Reuters.

"It may be the start of a new trend, smugglers know the situation is dangerous for them and they could be shot at, so they drop them near the shore and turn around and get more," she said.

The narrow waters between the Horn of Africa and Yemen have been a popular migration route despite Yemen's ongoing conflict. Migrants try to make their way to the oil-rich Gulf countries.

The passengers' average age was around 16, the IOM said.

"The survivors told our colleagues on the beach that the smuggler pushed them to the sea when he saw some 'authority types' near the coast," de Boeck stated. "They also told us that the smuggler has already returned to Somalia to continue his business and pick up more migrants to bring to Yemen on the same route."

De Boeck called the suffering of migrants on the route enormous, especially during the current windy season on the Indian Ocean. "Too many young people pay smugglers with the false hope of a better future," he said.

The IOM says about 55,000 migrants have left Horn of Africa nations for Yemen since January, with most from Somalia and Ethiopia. A third of them are estimated to be women.

Despite the fighting in Yemen, African migrants continue to arrive in the war-torn country where there is no central authority to prevent them from traveling onward. The migrants are vulnerable to abuse by armed trafficking rings, many of them believed to be connected to the armed groups involved in the war.

The conflict itself is a deadly risk. In March, Somalia's government blamed the Saudi-led coalition fighting in Yemen for an attack on a boat that killed at least 42 Somali refugees off Yemen's coast.

Some Somalis are desperate to avoid years of chaos at home with attacks by homegrown extremist group al-Shabab and deadly drought. Some Ethiopians have left home after months of deadly anti-government protests and a 10-month state of emergency.

More than 111,500 migrants landed on Yemen's shores last year, up from around 100,000 the year before, according to the Regional Mixed Migration Secretariat, a grouping of international agencies that monitors migration in the area.