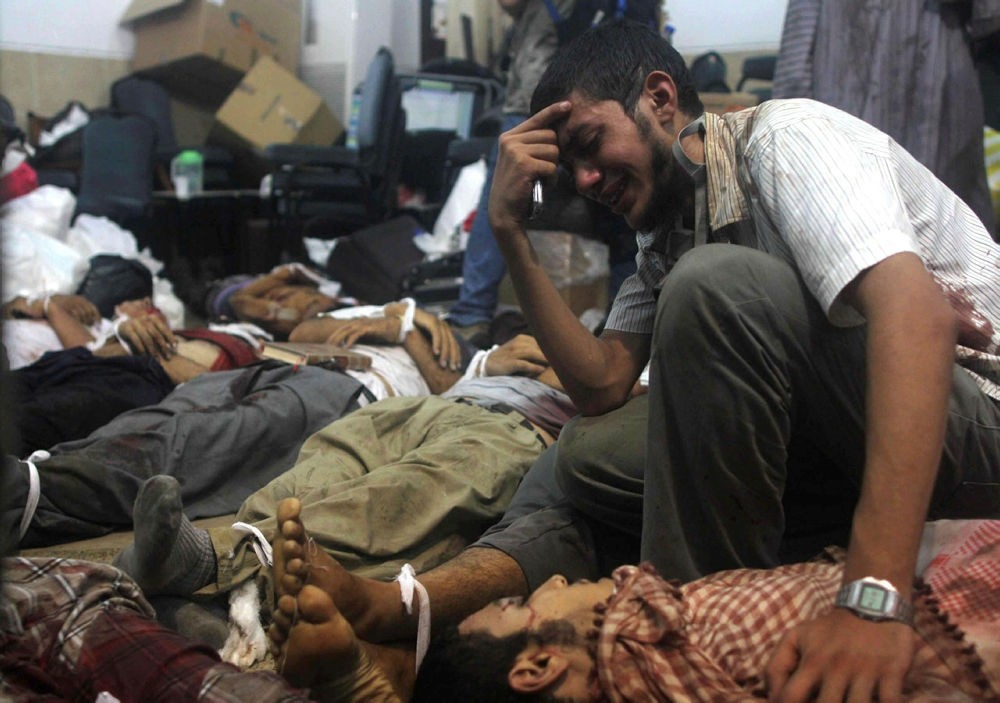 A man grieves as he looks at one of many bodies laid out in a make shift morgue after Egyptian security forces stormed two huge protest camps at the Rabaa al-Adawiya square. (AFP Photo)
by Anadolu Agency Aug 14, 2017 12:00 am

Six weeks before the massacre, Morsi -- Egypt's first freely elected president and a leader of the now-banned Muslim Brotherhood -- had been ousted and imprisoned by the formidable military establishment.

In the four years since the bloody sit-in dispersal, Egypt's post-coup authorities have waged a wide-ranging crackdown on dissent, killing hundreds of Brotherhood members and Morsi supporters and throwing thousands more behind bars.

Many analysts believe the bloodshed in Rabaa al-Adawiya Square served to deepen the political crisis in a country that has suffered continued unrest since early 2011, when a popular uprising unseated long-serving autocratic President Hosni Mubarak.

"Both sides -- the Muslim Brotherhood and their supporters and Egypt's military establishment -- must reconsider their current positions," he said.

Since the 2013 coup against Morsi, the Egyptian authorities have detained the entire leadership of Morsi's Brotherhood group on charges of having committed "acts of violence" -- allegations that critics say are trumped-up.

Egypt's army-backed authorities, meanwhile, claim to be fighting a "militant insurgency" in which hundreds of security personnel have been killed, especially in the volatile Sinai Peninsula.

Critics also accuse the authorities of failing to investigate the 2013 sit-in dispersal, which, according to the Muslim Brotherhood, left more than 2,500 people dead and thousands more injured.

Egypt's post-coup authorities, for their part, put the total death toll at some 620.

"The relatives of those killed in the dispersal have been deprived of their rights," Ammar al-Beltagy, son of detained Brotherhood leader Mohamed al-Beltagy, said.

He went on to squarely blame the post-coup authorities for the violence that the country continues to witness.

"We want justice and accountability for those responsible for the bloodshed," he said. "This is the only guarantee that such crimes won't be repeated."

Ammar, whose sister was killed in the 2013 sit-in dispersal, agreed that the violence in Cairo four years ago had been a primary driver of Egypt's ongoing political crisis.

"The bloodshed in Rabaa al-Adawiya Square dragged the country into a dark tunnel of revenge that has served to deepen the general polarization and division," he lamented.

"The bloodshed only led to more violence and dragged the country into endless confrontation with no end in sight," he said.

"There is no prospect for resolving the crisis as long as each side remains entrenched in its respective position," he added.

Saeed Sadiq, an Egyptian academic, warned that the polarization would only get worse "as long as the Brotherhood attacks the regime every chance its gets and the regime justifies its oppression by saying it is simply 'fighting terrorism'".

Nasser Amin, an Egyptian jurist, says the crisis can only be resolved through what he described as "transitional justice".

"All aspects of transitional justice should be applied by uncovering the truth [about what really happened], instituting reforms and compensating the victims," said Amin, a lawyer at The Hague-based International Criminal Court.

"In the absence of these measures, no viable settlement can be reached," he opined.

"The application of transitional justice can stop the bloodshed and resolve most of the problems related to a particular dispute," he said.

Ammar, for his part, called for the creation of an "atmosphere conducive to justice and freedom" with a view to resolving Egypt's ongoing crisis and the deep political divisions that continue to plague it.