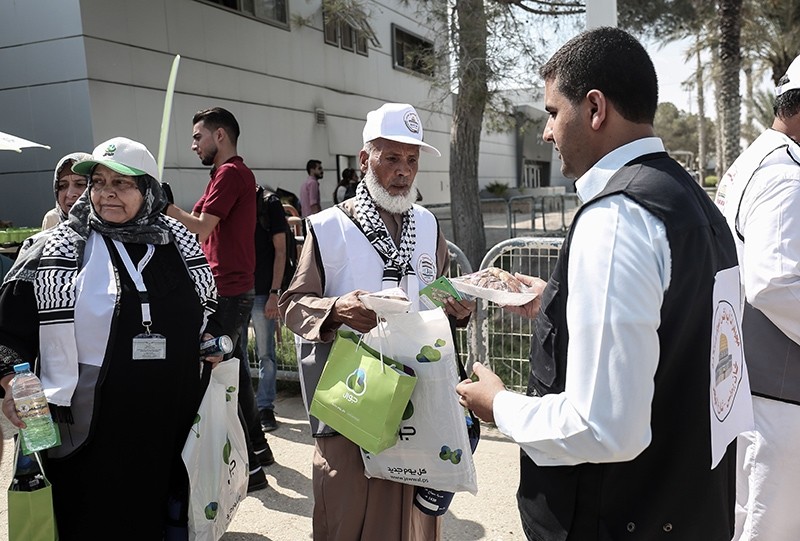 Palestinian Muslim pilgrims arrive at the Rafah border crossing between Egypt and the southern Gaza Strip, on August 14, 2017, ahead of their departure to the annual Hajj pilgrimage in Saudi Arabia's holy city of Mecca. (AFP Photo)
by Compiled from Wire Services Aug 14, 2017 12:00 am

Egypt reopened its border with the Gaza Strip Monday for the first time in months to allow Muslims from the blockaded Palestinian enclave to travel to Mecca for the hajj pilgrimage, authorities said.

"The crossing was reopened this morning for four days in one direction for 2,500 pilgrims," Hisham Adwan, director of information at the crossings authority of the Hamas-run interior ministry, said.

"About 800 pilgrims will leave the strip today," he added, saying they had all already received Saudi visas.

The Rafah crossing with Egypt has been largely closed in recent years apart from occasional openings.

The Hajj – a major tenet of Islam to cleanse sins and bring worshippers closer to God – will start later this month. More than two million pilgrims are expected to perform the ritual this year.

Israel has also maintained a crippling blockade on Gaza for a decade that it says is necessary to stop resistance movement Hamas, which rules the strip, from obtaining weapons or materials that could be used to make them.

Blockaded by Israel – by air, land and sea – since 2007, the Gaza Strip has seven border crossings linking it to the outside world.

Six of these are controlled by Israel, while the seventh, the Rafah crossing, is controlled by Egypt, which keeps it tightly sealed for the most part since the ouster of President Mohamed Morsi in a 2013 military coup.

But Hamas has moved closer to the Egyptian government in recent months and officials privately hope the Rafah crossing will be at least partially reopened from next month.

One pilgrim who was waiting to cross the border told AFP he had been trying to travel to Mecca since 2014.