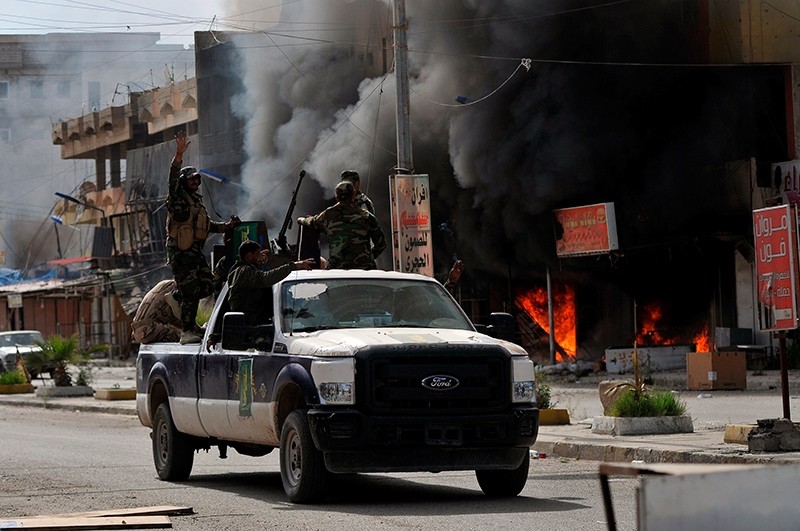 Members of Hashid Shaabi forces ride in a vehicle as smoke rises in shops at al-Qadisiya neighborhood, north of Tikrit April 3, 2015. (Reuters Photo)
by Daily Sabah with AA Aug 14, 2017 12:00 am

The groups are part of the Hashd al-Shaabi militia, a Shiite paramilitary force that has been providing support to government forces in the ongoing fight to dislodge Daesh terrorist group from Iraq.

Lieutenant Faraj Hamed said the Abbas Brigade, Ali Al-Akbar Brigade, the Badr Military Wing, the Imam Ali Brigades, the Imam Hussein Brigade, and the Hezbollah Battalions will participate in the fight to seize control of Tal Afar from Daesh.

A predominantly Turkmen city, Tal Afar was captured by Daesh in mid-2014 along with vast swathes of territory in northern and western Iraq.

The participation of the Hashd al-Shaabi in the planned Tal Afar operation has sparked fears of a possible sectarian conflict.

Iraq's Sunni Arabs and human rights groups have long accused the militiamen, formally incorporated into the Iraqi military last year, of being involved in extrajudicial killings, abuse and the theft or destruction of property in areas from which they drove out Daesh.

The Turkish government has become increasingly uneasy over extremist Shiite militia Hashd al-Shaabi's imminent ground offensive on the Turkmen-populated Iraqi town of Tal Afar. Ankara expressed its frustration over a Hashd al-Shaabi-led operation against Daesh-held Tal Afar, saying the offensive should be carried out by the national Iraqi army rather than a recently legalized paramilitary group.