WHO records half a million cholera cases in Yemen 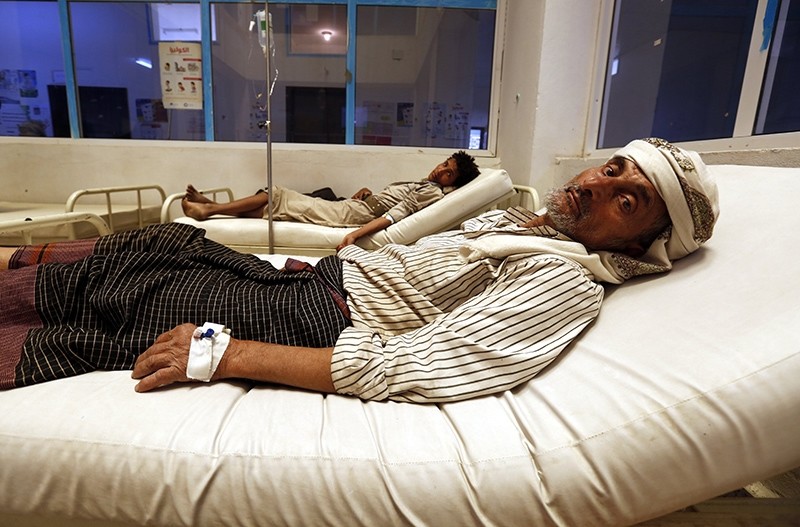 Cholera-infected Yemenis receive treatment amid an acute cholera outbreak at a hospital in Sana'a, Yemen, August 7, 2017. (EPA Photo)
by Compiled from Wire Services Aug 14, 2017 12:00 am

Cholera is believed to have affected more than 500,000 people and killed nearly 2,000 since late April, the World Health Organization said Monday.

Each day there are more than 5,000 new cases of the waterborne disease, which causes acute diarrhea and dehydration, in the country where the health system has collapsed after more than two years of war, it said.

A full 503,484 suspected cases and 1,975 deaths are attributable to the outbreak that erupted last than four months ago in the war-ravaged country, a WHO overview showed.

"The total number of suspected cholera cases in Yemen this year hit the half a million mark on Sunday, and nearly 2,000 people have died since the outbreak began to spread rapidly at the end of April," the WHO said in a statement on Monday.

"The spread of cholera has slowed significantly in some areas compared to peak levels but the disease is still spreading fast in more recently affected districts, which are recording large numbers of cases," it said.

The disease, spread by ingestion of food or water tainted with human faeces, can kill within hours if untreated. It has been largely eradicated in developed countries equipped with sanitation systems and water treatment.

But Yemen's devastating civil war, pitting a Saudi-led military coalition against the Iran-backed armed Houthi group, and economic collapse has made it extremely difficult to deal with catastrophes such as cholera and mass hunger.

Millions of Yemenis remain cut off from clean water and waste collection has ceased in major cities, the WHO added.

Yemen's 30,000 critical health workers have not been paid salaries in nearly a year and critical medicines are lacking, the WHO said.

"These doctors and nurses are the backbone of the health response – without them we can do nothing in Yemen. They must be paid their wages so that they can continue to save lives," said Tedros Adhanom Ghebreyesus, WHO Director-General.

WHO and partners are working around the clock to set up cholera treatment clinics, rehabilitate health facilities, deliver medical supplies and support the national effort, the United Nations agency said.

"The people of Yemen cannot bear it much longer - they need peace to rebuild their lives and their country," Ghebreyesus said.

More than 99 percent of patients who reach health facilities survive but children and the elderly are most vulnerable.

"The response is working in some places. We can tell you that surveillance confirms a decline in suspected cases over the past four weeks in some of the most affected governorates," WHO spokeswoman Fadela Chaib told a news briefing last Friday.

"Most notably Sanaa city, Hajja and Amran are consistent with his decline. But in many other districts, cases and deaths persist and are on the rise."