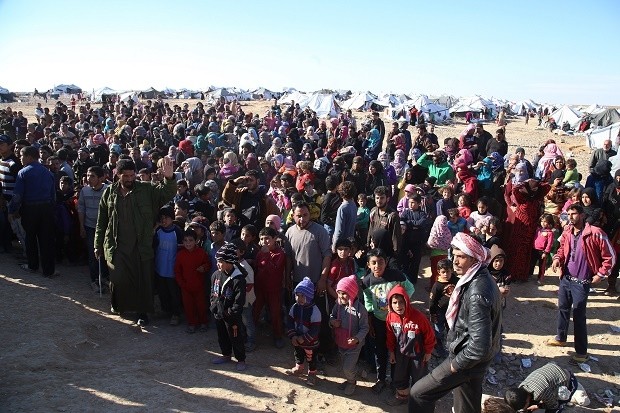 Syrian refugees stuck at the Jordanian-Syrian border wait to cross into the Hadalat area of Jordan.
by Compiled from Wire Services Aug 16, 2017 12:00 am

The humanitarian crisis on the Syrian-Jordanian border continues to escalate as thousands of people trapped there are reportedly living on just flour and water, the United Nations warned

Nearly 50,000 people, mostly women and children, are stranded at Syria's southern border with Jordan, an increasingly unsafe area where airstrikes were reported in the last few days, the United Nations said Monday.

U.N. deputy spokesman Farhan Haq told reporters that "some people are reportedly attempting to leave the area, risking further danger and deprivation in an inhospitable desert location."Those remaining in the area, known as the berm, face a scarcity of food and healthcare, Haq said. In one section, called Hadalat, an estimated 4,000 people are reportedly living solely on flour and water, he said.

Jordan shares a 375-kilometer border with Syria, which fell into civil war in 2011. There are reportedly more than 1.3 million Syrian refugees in Jordan.

Jordan closed its border with Syria in June 2016 after a Daesh car bombing staged from near Rukban killed seven Jordanian border guards. Since then, international aid organizations have wrestled with the dilemma posed by sending aid to an off-limits area.

U.N. agencies agreed late last year to an aid system that critics say handed much of the control over aid distribution to Jordan's military and a Jordanian contractor and also involved armed men on the Syrian side.

Haq said Monday that U.N. agencies "are deeply concerned about the security and protection" of the nearly 50,000 people stranded at the border.

"The U.N. calls on all parties to the conflict to take the necessary steps to prevent further harm to the frightened and highly vulnerable individuals stranded at the border," he said. U.N. agencies are ready to continue supporting Jordanian authorities, despite limited resources, and "immediately provide protection and additional life-saving assistance as needed," Haq said.

Pro-Syrian regime media sources said government troops captured an area of 1,300 square kilometers, in addition to some strategic hills. It also said the capture closed major smuggling points used by rebels to bring weapons and fighters from Jordan into the war-torn country. The regime has recently managed to regain control of some 30 kilometers of its border with Jordan with the massive aid of Iran-backed Shiite militias. Jordanian authorities voiced their concern over Iran's expanding influence in Syria. Iran denies having any boots on the ground in Syria, and insists its commanders and generals of the elite Revolutionary Guards' foreign operations wing act as military advisers both there and in Iraq.

Syria has been locked in a vicious civil war since early 2011, when the regime cracked down with unexpected ferocity on pro-democracy protests that erupted as part of the Arab Spring uprisings. Since then, more than a quarter of a million people have been killed and more than 10 million displaced across the war-torn country, according to U.N. figures.