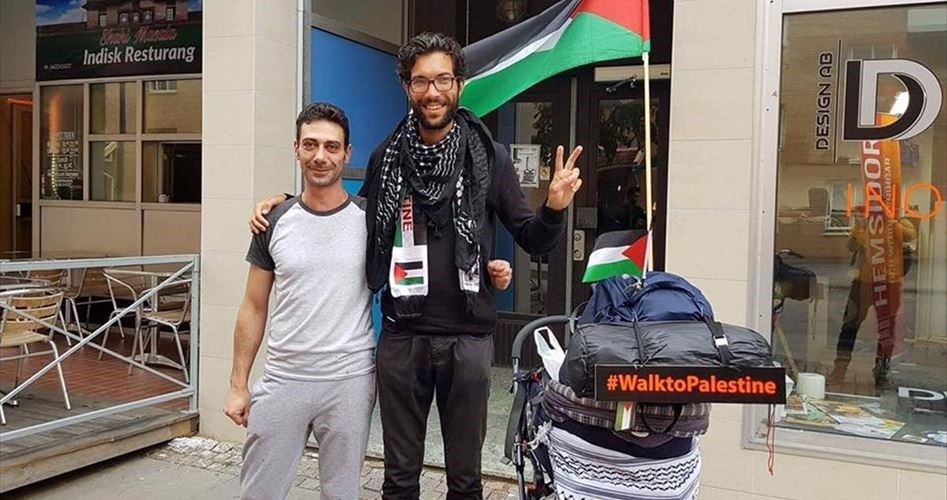 | photograph courtesy of the Palestinian Information Center
by daily sabah Aug 19, 2017 12:00 am

A Swedish activist pledged to walk 4,800-kilometers from Sweden's Gothenburg to Palestine to raise awareness for the Palestinian cause, as well as to mark the centennial of the Balfour Declaration, which in 1917 pledged a Jewish homeland in then-British controlled Palestine.

24-year-old Benjamin Ladra, who started his walk on Aug. 8 said he will tell the world about the situation in Palestine and try to spread knowledge about the ongoing Israeli occupation.

Carrying the Palestinian flag on his back and a keffiyeh, a symbol of Palestinian independence, over his shoulders, Ladra said he has witnessed the Israeli soldiers' constant harassment of Palestinians and has seen the occupation with his own eyes. Ladra called it "an ongoing apartheid situation and said "not wanting to do something about the situation is impossible."

Ladra's route to Palestine will start in Sweden and will then take him to Austria, Germany, Turkey and Cyprus, then to his final destination. He said he took a year off from everything to realize his goal without any other obstacles. His march is self-funded except for a few private donations since he started walking.