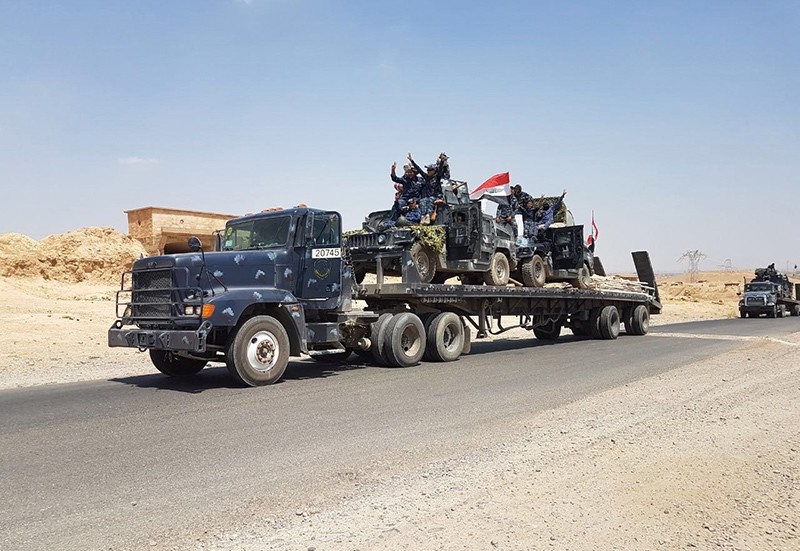 A handout picture released by Iraqi Federal Police on August 15, 2017, shows Iraqi armoured units headed for the town of Tal Afar, the main remaining Daesh terrorist group stronghold in the northern part of the country. (Iraqi Federal Police via AFP)
by Compiled from Wire Services
Aug 20, 2017 12:00 am

The announcement comes a month after the capture by Iraqi forces of second city Mosul further east in a major blow to the terrorists.

The town, about 150 kilometers (93 miles) east of the Syrian border, sits along a major road that was once a key Daesh supply route.

In a televised speech, Abadi, dressed in military uniform and standing in front of an Iraqi flag and map of the country, announced "the start of an operation to free Tal Afar".

"The city of Tal Afar will be liberated and will join all the liberated cities," Abadi said, adding a message for Daesh which was to "either surrender or die."

Daesh terrorists are expected to put up a tough fight, even though intelligence from inside the city indicates they have been exhausted by months of combat, aerial bombardments, and by the lack of fresh supplies.

Iraq's mostly Shiite militiamen largely stayed out of the operation to retake Mosul, a mostly Sunni city about 80 kilometers (50 miles) to the east, but have vowed to play a bigger role in the battle for Tal Afar, which was home to Iraqi Turkmen before it fell to Daesh. The militias captured Tal Afar's airport, on the outskirts of the town, last year.

Their participation in the coming offensive could heighten sectarian and regional tensions. The town's ethnic Turkmen community maintained close ties to neighboring Turkey. Turkish officials have expressed concern that once territory is liberated from Daesh, Iraqi Kurdish or Shiite forces may push out Sunni Arabs and ethnic Turkmen.

A stepped up campaign of airstrikes and a troop buildup has already forced tens of thousands to flee Tal Afar, threatening to compound a humanitarian crisis sparked by the Mosul operation.

Some 49,000 people have fled the Tal Afar district since April, according to the United Nations. Nearly a million people remain displaced by the nine-month campaign to retake Mosul.

The United Nation's International Organization for Migration (IOM), estimates that about 10,000 to 40,000 people are left in Tal Afar and surrounding villages. Aid groups say they are not expecting a huge civilian exodus as most the city's former residents have already left.