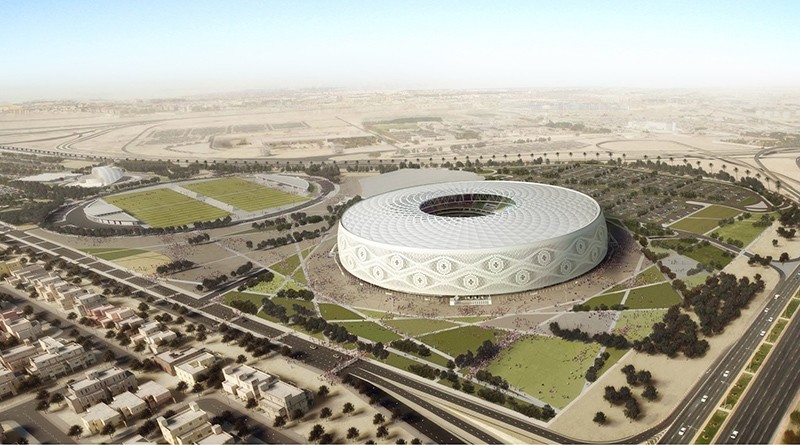 Photo courtesy of Qatar's Supreme Committee for Delivery & Legacy. (via Twitter)
by Daily Sabah with Reuters
Aug 20, 2017 12:00 am

Qatar will build a stadium shaped like an Arabian skull cap for the 2022 World Cup, organizers said Sunday, as the Gulf state moves ahead with preparations for the tournament despite a diplomatic rift with its neighbors.

Doha's Al Thumama stadium, designed by a Qatari architect in the shape of "gahfiya," one of three components of traditional knitted Arabian cap.

The venue will host 40,000 fans at a World Cup quarter final match, the country's 2022 organizing body said in a statement.

"This symbolic design embodies everything that unites us as Arabs and Muslims, and is a fitting tribute to the first FIFA World Cup in the Middle East," said Hassan al-Thawadi, Qatar's 2022 committee chief.

According to Thawadi, the design of the stadium was a "blend of [Qatari] culture, heritage, and commitment to the future."

The venue and its precinct will offer boutique hotel, sports clubs and a range of amenities for the local Al Thumama community, the Qatar Supreme Committee for Delivery and Legacy said.

The main contractor of Al Thumama Stadium is a Joint-Venture of Turkey's Tekfen Construction and Qatar's Al Jaber Engineering. The joint venture signed a $342 million agreement with the Qatari government.

The stadium will be third large stadium project undertaken by the Turkish company, following the construction of Istanbul Atatürk and Baku Olympic Stadiums.

"Work on the stadium is already underway, with enabling works completed in 2016. The stadium and precinct will be ready by 2020," the committee said.

The venue is one of least eight air-conditioned stadiums Qatar is building along with a new port and metro system as part of a $200 billion infrastructure upgrade.

Qatar also said that the ongoing crisis between the emirate and four Arab nations would not cause any delays in preparations for the 2022 tournament.

Saudi Arabia, the United Arab Emirates, Egypt and Bahrain cut diplomatic ties with Qatar and severed air, land and sea links with it on June 5 after accusing it of backing "extremist" groups. Qatar strongly denies the charge and argues the isolation effort is politically motivated.

To get around the boycott, Qatar has flown in food from Turkey and Iran and chartered ships via Oman to bring in construction materials needed for World Cup projects.

The boycotting countries later issued a tough 13-point list of demands needed to resolve the crisis, including shutting down news outlets including Al-Jazeera, limiting ties with Iran and expelling Turkish troops stationed in the country.