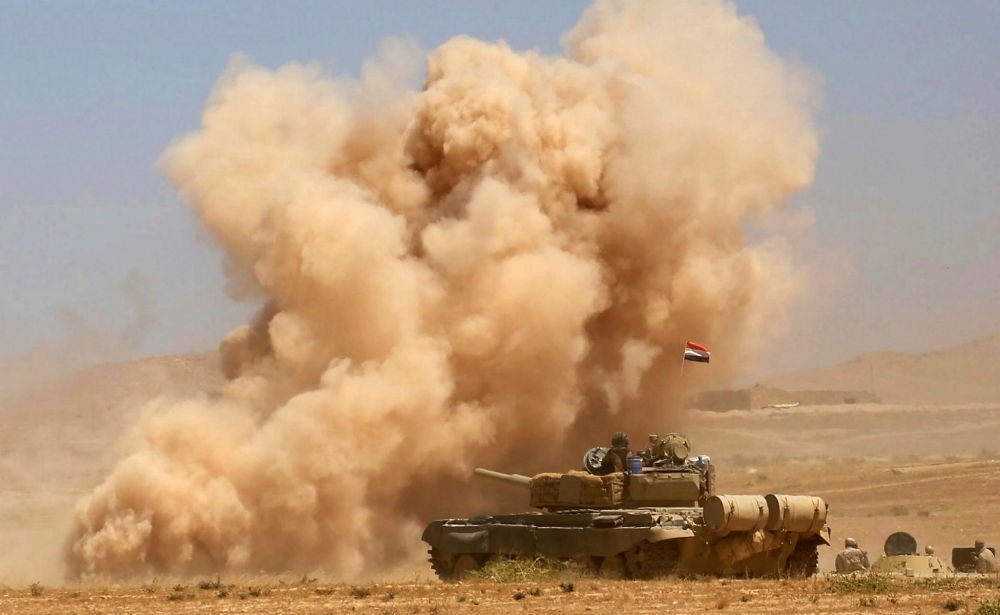 Smoke billows as Iraqi government forces advance toward the city of Tal Afar, Aug. 20.
by Compiled from Wire Services Aug 22, 2017 12:00 am

A stepped up campaign of airstrikes and troop buildup has already forced tens of thousands to flee Tal Afar, threatening to compound the humanitarian crisis sparked by the Mosul operation

The United Nations warned that thousands of civilians are expected to flee Daesh-held Tal Afar and surrounding areas where Iraqi security forces have launched an operation to retake the town.

The Humanitarian Coordinator for Iraq, Lise Grande, describes the situation inside Tal Afar as "very tough," where food and water are running out and people lack the basic necessities.

In a statement issued on Sunday hours after the multi-pronged operation was announced, Grande expressed concerns "about the extreme risks that families are facing" and called on warring parties to protect the civilians. Some 49,000 people have fled the Tal Afar district since April, according to the United Nations. Nearly a million people remain displaced by the nine-month campaign to retake Mosul. The United Nation's International Organization for Migration (IOM) estimates that about 10,000 to 40,000 people are left in Tal Afar and surrounding villages.

Tal Afar and the surrounding area is one of the last pockets of Daesh-held territory in Iraq after victory was declared in July in Mosul. The town, about 150 kilometers (93 miles) east of the Syrian border, sits along a major road that was once a key Daesh supply route.

Aid groups have warned the operation could trigger a humanitarian crisis as a stepped up campaign of airstrikes and troop buildup has already forced tens of thousands to flee, according to the United Nations.

The move came one day after the Iraqi army launched a fresh military operation to recapture the northwestern city of Tal Afar from Daesh.

Iraq's mostly Shiite militiamen largely stayed out of the operation to retake Mosul, a mostly Sunni city about 80 kilometers (50 miles) to the east, but have vowed to play a bigger role in the battle for Tal Afar, which was home to Iraqi Turkmen before it fell to Daesh. The militias captured Tal Afar's airport, on the outskirts of the town, last year.

Their participation in the coming offensive could heighten sectarian and regional tensions. The town's ethnic Turkmen community maintained close ties to neighboring Turkey. Turkish officials have expressed concern that once territory is liberated from Daesh, Iraqi Kurdish or Shiite forces may push out Sunni Arabs and ethnic Turkmen.

Last month, Iraqi forces dislodged Daesh from their last stronghold in Mosul, once Iraq's second largest city in terms of population. Mosul fell to the Daesh terrorist group in 2014 when its militants blitzed across much of northwestern Iraq and subsequently declared a caliphate on the territory held by extremists in Iraq and Syria. Iraqi forces launched the operation to retake Mosul last October and by late January, the eastern half of the city - which is roughly divided by the Tigris into a western and eastern section - was declared liberated. The push into western Mosul began the following month and in June, Iraqi forces started the weeks-long push through the Old City, Mosul's most congested district.