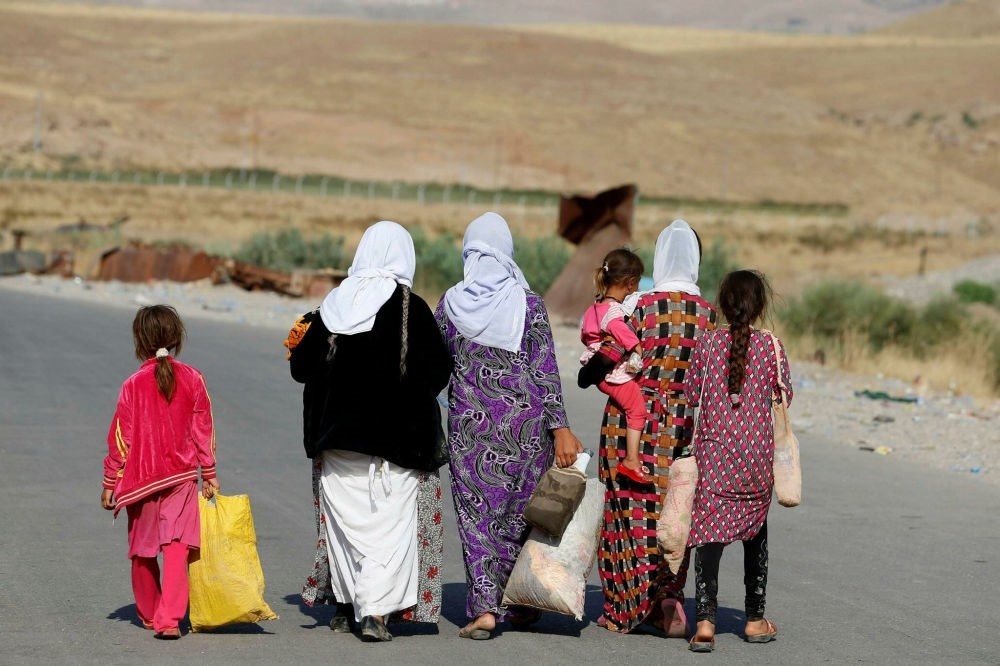 Women and children from the minority Yazidi sect, fleeing the violence in the Iraqi town of Sinjar, walk to a refugee camp.
by Daily Sabah with Wires
Aug 23, 2017 12:00 am

Iraq must ensure that women and girls subjected to sexual violence at the hands of Daesh militants have access to justice and reparations, U.N. investigators warns

A United Nations report published yesterday urges the Iraqi government to do more to help thousands of women and girls who faced rape, sexual abuse and other violations by the Daesh terrorist group.

The report by the U.N. rights office and the U.N. mission in Iraq makes recommendations about ways to improve justice, increase accountability and allow for reparations for victims as Daesh's territorial control has been dwindling. The report builds on last year's finding that Islamic State was committing genocide against the Yazidi people. The rare designation under international law marked the first time genocide was recognized as being carried out by non-state actors.

Daesh has subjected large numbers of women and girls to conflict-related sexual violence including rape and sexual enslavement, as well as psychological violence, the report says, adding that victims must be reintegrated into their families and communities and perpetrators must be held accountable.

Women of ethnic minorities are especially vulnerable, the report explains, and Daesh has targeted the Yezidi community in particular. According to the Ministry of Endowment and Religious Affairs, the Office of Yezidi Administrative Affairs, between August 2014 and July 2017, approximately 6,417 people from the Yezidi community were abducted by Daesh members.

The report comes three days after Iraqi security forces launched their offensive to retake the city of Tal Afar, one of the militant groups' last remaining strongholds in Iraq.

"With significant areas under the control of [Daesh] having been reclaimed, it is now urgent to consider what steps need to be taken to ensure the protection, recovery, reintegration and redress for the thousands of women and girls," the report states.

Although the report notes some successes, it says Iraq's criminal justice system "largely fails" to adequately protect abused women and girls subjected to sexual and other violence.

The report urges authorities to avoid recording information on a child's birth certificate about the father that could lead to discrimination or possible violence, such as among children of fathers who fought for Daesh.

Instead, the U.N. advocates for protection of children born to women who were married to persons affiliated with Daesh, so that they are not subjected to discrimination, marginalization or other forms of violence and abuse.

The report cites the Security Council Resolution 2331 (2016) on Trafficking and Sexual Violence, which especially looked at women who had been enslaved by Daesh. The resolution calls for more accountability and support services, including reparation programs, for survivors of abuse.