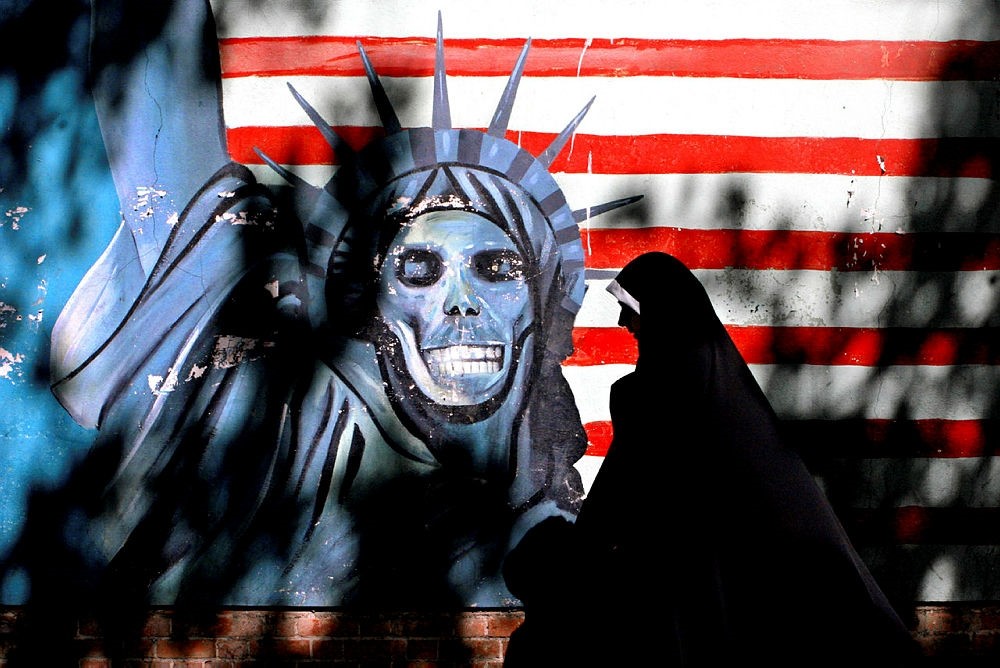 Iranian woman walks past graffiti art characterizing the U.S. Statue of Liberty, painted on the wall of the former U.S. Embassy in Tehran, Iran. (AP Photo)
by Sep 03, 2017 12:00 am

Iran confirmed on Sunday that an appeals court had upheld 10-year jail terms against a U.S. citizen, two Iranian-Americans and a U.S. resident from Lebanon who had been convicted on spying charges.

In July, U.S. President Donald Trump warned that Iran would face "new and serious consequences" unless all "unjustly detained" American citizens were released and returned.

In Washington, Jared Genser, a lawyer for the Namazis, said in a statement carried by U.S. media last week that their family was informed that a Tehran court had upheld the convictions days earlier.

Earlier in August, Princeton University and the wife of Wang, a history doctoral student and U.S. citizen, said they had been informed that Iranian authorities had denied the appeal.

Wang was conducting dissertation research in Iran in 2016 when he was detained and charged with "spying under the cover of research", an accusation his family and university denied.

Iran sentenced Zakka, a Lebanese citizen with permanent U.S. residency, to 10 years in prison and a $4.2 million fine in 2016 after he was found guilty of collaborating against the state, according to his U.S.-based lawyer.

Zakka, an information technology expert, had been invited to Iran by a government official a year earlier, but then disappeared after attending a conference in Tehran.

Iran's 2015 nuclear deal with world powers lifted most international sanctions and promised Iran's reintegration into the global community in exchange for curbs on its nuclear programme.

The potential detente with the West has alarmed Iranian hardliners, who have seen a flood of European trade and investment delegations arrive in Tehran to discuss possible deals, according to Iran experts.

Security officials have arrested dozens of artists, journalists and businessmen, including Iranians holding joint American, European or Canadian citizenship, as part of a crackdown on "Western infiltration".

The arrests have undermined President Hassan Rouhani's goals of reviving business and political ties with the West, as well as pushing for more political and social reforms at home, Iran experts and observers said.

A number of Iranian dual nationals from the United States, Britain, Austria, Canada and France have been detained in the past year and are being kept behind bars on charges including espionage and collaborating with hostile governments.

According to former prisoners, families of current ones, and diplomats, in some cases the detainees are kept to be used for a prisoner exchange with Western countries.

In January 2016, the United States and Iran reached a historic prisoner swap deal that saw Iranians held or charged in the United States, mostly for sanctions violations, released in return for Americans imprisoned in Iran.