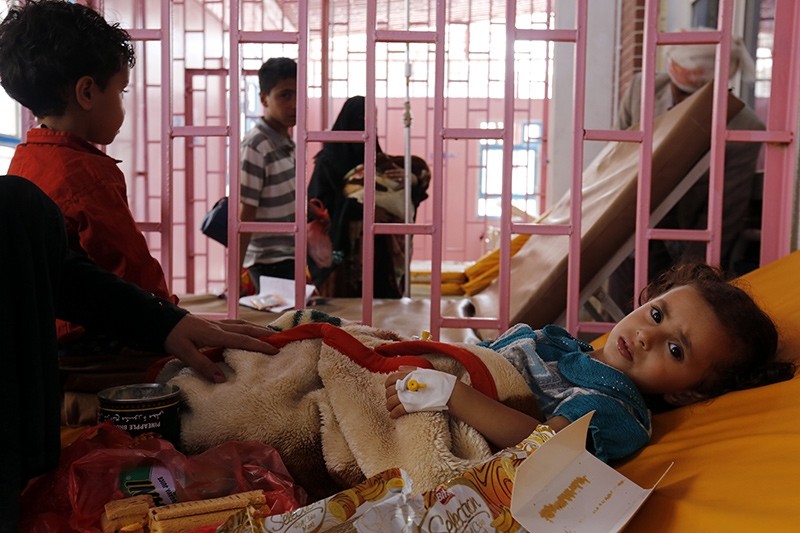 Cholera-infected Yemeni children receive treatment at a hospital amid a cholera outbreak in Sanau2019a, Yemen, 11 September 2017 (EPA Photo)
by Compiled from Wire Services Sep 12, 2017 12:00 am

The Saudi-led coalition waging an air campaign against Yemen's Houthi rebels in the north is killing children in what amounts to war crimes, an international rights group said Tuesday.

Human Rights Watch released a detailed report documenting the deaths of 26 children killed in five airstrikes since June. The group said that despite coalition promises to abide by international law, the airstrikes have failed to do that and it urged the United Nations to place the coalition on its "list of shame," a blacklist of countries that violate child rights.

The U.N. blacklisted the coalition after concluding in a report released one year ago that it had been responsible for the majority of children's deaths in Yemen.

But in an embarrassing climb down, the world body then announced that the coalition would be removed from the list.

The then U.N. chief Ban Ki-moon admitted at the time that the decision was influenced by threats from Saudi Arabia and its allies to cut off funding to UN aid programs.

In most of its internal investigations, the coalition either admits making mistakes due to technical errors or bad intelligence or denies responsibility. No international investigation has taken place despite repeated calls from rights groups. Meanwhile, the United States and Western countries have continued to support the coalition with intelligence, logistics and billion-dollar arms deals.

The conflict in Yemen pits Iran-backed Houthi rebels and allied forces of the ousted Yemeni president against the internationally recognized government and its main backers, the Saudi-led coalition.

Airstrikes the past two years have targeted civilian gatherings at weddings, funerals, hospitals, markets and houses. Over 10,000 people have been killed and three million others displaced as the conflict coupled with a naval and air blockade has pushed Yemen to the brink of famine.

The U.N.'s annual report on children and armed conflict showed that 785 children were killed and more than 1,000 others wounded in Yemen in 2015, with 60 percent of the casualties caused by coalition airstrikes.

Peace talks have failed to bridge the gap between warring parties while alliances on both sides appeared to be unraveling, threatening to prolong the conflict.