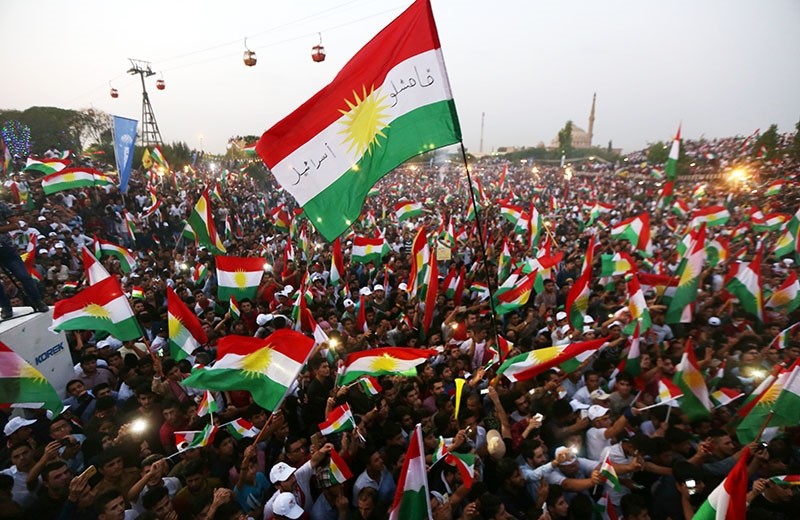 Iraqi Kurds fly Kurdistan Regional Government flags during an event to urge people to vote in the upcoming independence referendum in Arbil, the capital of the autonomous Kurdish region of northern Iraq, on Sept. 16, 2017. (AFP Photo)
by Daily Sabah with Agencies Sep 18, 2017 12:00 am

The Supreme Court of Iraq yesterday ordered the suspension of the planned independence referendum by the Kurdistan Regional Government (KRG) scheduled for Sept. 25.

"The supreme court has issued the order to suspend organizing the referendum set for Sept. 25 ... until it examines the complaints it has received over this plebiscite being unconstitutional," it said in a statement.

It is doubtful that the ruling would have any effect on the KRG, which has repeatedly denied calls from Baghdad and regional powers to suspend the referendum.

KRG President Masoud Barzani had previously stated that Iraqi parliament's voting rejecting the referendum and sacking the governor of the contested Kirkuk region will not be implemented.

According to a statement, the council, chaired by Iraq's Prime Minister Haider al-Abadi, met in the capital Baghdad and stated that the referendum was also posing a threat to the national security and unity of the country.

The statement added that the council emphasized the importance of solving problems through dialogue rather than risking the security of the country.

In the meantime, Turkey reiterated its opposition to the KRG's decision to hold the independence referendum on Sept. 25.

Speaking on Sunday in Istanbul ahead of his departure to the United States where he will be attending the 72nd United Nations General Assembly, President Recep Tayyip Erdoğan said Ankara will not allow steps that would lead to territorial division in Iraq. "We say one thing: We have a 350-kilometer-long border there. We have kins there, co-religionists there. Same with them too. We are members of the same civilization. In other words, them being Kurdish, Turkmen or Arab and us on this side being Turkish does not separate us from each other. However, if this understanding is, unfortunately, aimed at dividing Iraq, then, we would not say 'Here, go ahead'," he said.

Erdoğan added that while Ankara's position has been relayed to the KRG numerous times, as there is a difference in the approach, the stance on keeping Iraq's territorial integrity has also been communicated to the central government in Baghdad. President Erdoğan will be meeting with Iraqi Prime Minister Haider al-Abadi during the summit in New York to discuss the referendum, which is expected to be held in less than two weeks.

Regarding the issue, Prime Minister Binali Yıldırım said yesterday that Turkey won't accept a fait accompli on its southern borders. "Those who threaten Turkey's national security, through chasing rainbows and trying to establish artificial states in Iraq and Syria, would get the necessary answer immediately," he said.

Meanwhile, Vice President of Iraq Nouri al-Maliki said Sunday that his country will not allow the creation of a "second Israel" in northern Iraq.

Maliki made the remarks in a meeting with U.S. Ambassador to Iraq Douglas Silliman in the capital Baghdad, during which the two discussed a number of issues including the Kurdish independence referendum, according to his office.

"We will not allow the creation of a second Israel in northern Iraq," said the Iraqi vice president in opposition to Israel after the latter voiced support for an independent Kurdish state Thursday.

Maliki warned that the referendum will have "dangerous consequences for the security, sovereignty and unity of Iraq."

Hadi al-Ameri, head of the Iranian-backed Badr Organization, also warned that the Kurdish referendum could lead to partition and civil war, and vowed to defend the unity of Iraq.

Iran, another regional power that staunchly opposes the KRG's independence, warned on Sunday that independence for Iraqi Kurdistan would mean an end to all border and security arrangements with the regional government.

Israel is the first and only country in the region to endorse the referendum while Turkey, Iraq and Iran all said they opposed the vote, which would bring instability to the region and divide Iraq, with the Iraqi central government calling it "unconstitutional."

The U.N. says Secretary-General Antonio Guterres opposes the Sept. 25 independence referendum planned by the KRG for the enclave in the country's north.

U.N. spokesman Stephane Dujarric said Sunday that Guterres believes any unilateral decision to hold a referendum now would detract from the need to defeat Daesh.

He says the U.N. chief believes the referendum would also detract from reconstruction of regained territories and the safe return of over 3 million people displaced by Daesh.

Dujarric says Guterres respects Iraq's "sovereignty, territorial integrity and unity" and believes all issues between the federal government and the Kurdistan regional government should be resolved through dialogue and compromise.

He says Guterres is calling on Iraq's leaders to approach the matter with "patience and restraint."