US urges KRG to cancel independence referendum, says it will destabilize Iraq, harm fight against Daesh 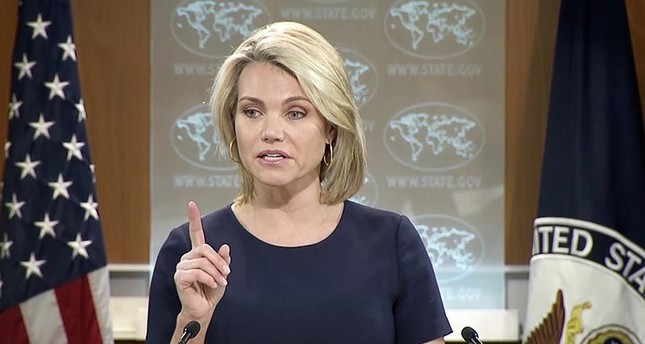 The U.S. State Department has urged the Kurdistan Regional Government (KRG) to cancel the planned independence referendum to secede from Iraq.

Heather Nauert, the spokesperson of the department, said late Wednesday that if the referendum is conducted, it will be destabilizing for Iraq and will harm the fight against Daesh.

"If this referendum is conducted, it is highly unlikely that there will be negotiations with Baghdad, and the above international offer of support for negotiations will be foreclosed. The costs of proceeding with the referendum are high for all Iraqis, including Kurds. Already the referendum has negatively affected Defeat-ISIS coordination to dislodge ISIS from its remaining areas of control in Iraq. The decision to hold the referendum in disputed areas is especially de-stabilizing, raising tensions which ISIS and other extremist groups are now seeking to exploit. The status of disputed areas and their boundaries must be resolved through dialogue, in accordance with Iraq's constitution, not by unilateral action or force," Nauert said, using an alternative acronym for Daesh terrorist group.

"The United States strongly opposes the Iraqi Kurdistan Regional Government's referendum on independence, planned for Sept. 25. All of Iraq's neighbors, and virtually the entire international community, also oppose this referendum. The United States urges Iraqi Kurdish leaders to accept the alternative, which is a serious and sustained dialogue with the central government, facilitated by the United States and United Nations, and other partners, on all matters of concern, including the future of the Baghdad-Irbil relationship," she also said, warning the KRG and its president Masoud Barzani.

"Finally, the referendum may jeopardize Iraqi Kurdistan's regional trade relations, and international assistance of all kinds, even though none of Iraq's partners wish this to be the case. This is simply the reality of this very serious situation. In contrast, genuine dialogue, the alternative, which we urge Kurdish leaders to embrace, holds the promise of resolving a great many of Iraqi Kurds' legitimate grievances, and establishing a new and constructive course for Baghdad-Erbil relations that benefit all the people of Iraq," she added.

"The referendum itself is now all the more unnecessary given the alternative path that has been prepared and endorsed by the United States and the international community."