US does not recognize KRG referendum, Tillerson says 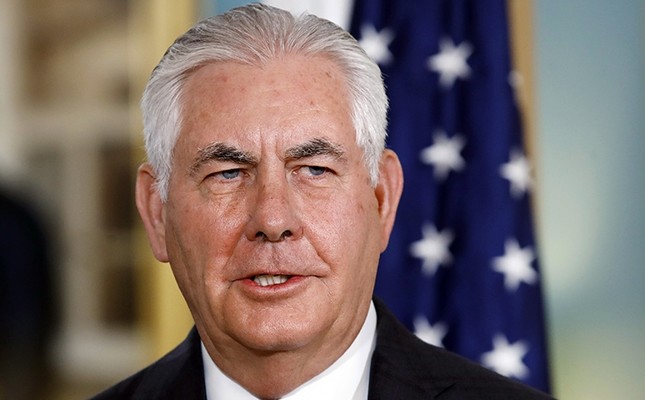 "The United States does not recognize the Kurdistan Regional Government's unilateral referendum held on Monday. The vote and the results lack legitimacy and we continue to support a united, federal, democratic and prosperous Iraq," Tillerson said.

"We remain concerned about the potential negative consequences of this unilateral step. Prior to the vote, we worked with both the KRG and the central government in Baghdad to pursue a more productive framework and to promote stability and prosperity for the people ‎of the Kurdistan region. These aspirations, ultimately, cannot be advanced through unilateral measures such as this referendum," the secretary added.

Tillerson also said that the fight against Daesh terrorist group, who seeks to exploit instability and discord, was not over, urging "Iraqi partners to remain focused on defeating Daesh."

The top U.S. diplomat also urged "calm and an end to vocal recriminations and threats of reciprocal actions."

The KRG held a controversial independence referendum Monday, which was criticized by most of the international community.

Monday's illegitimate referendum saw Iraqis in KRG-controlled areas — and in a handful of territories disputed between Irbil and Baghdad, including ethnically mixed Kirkuk and Mosul — vote on whether or not to declare independence from Iraq's central government.

Along with Iraq's central government, Turkey, the U.S., Eu, Iran, and the U.N. had spoken out against the illegitimate poll, warning it would distract from the ongoing fight against Daesh and further destabilize the region.

Share on Facebook Share on Twitter
Previous in MidEast The U.S. is setting up a military base in the Makhmur district of... Next in MidEast At least 28 civilians were killed in air strikes on northwestern Syria...
DAILY SABAH RECOMMENDS