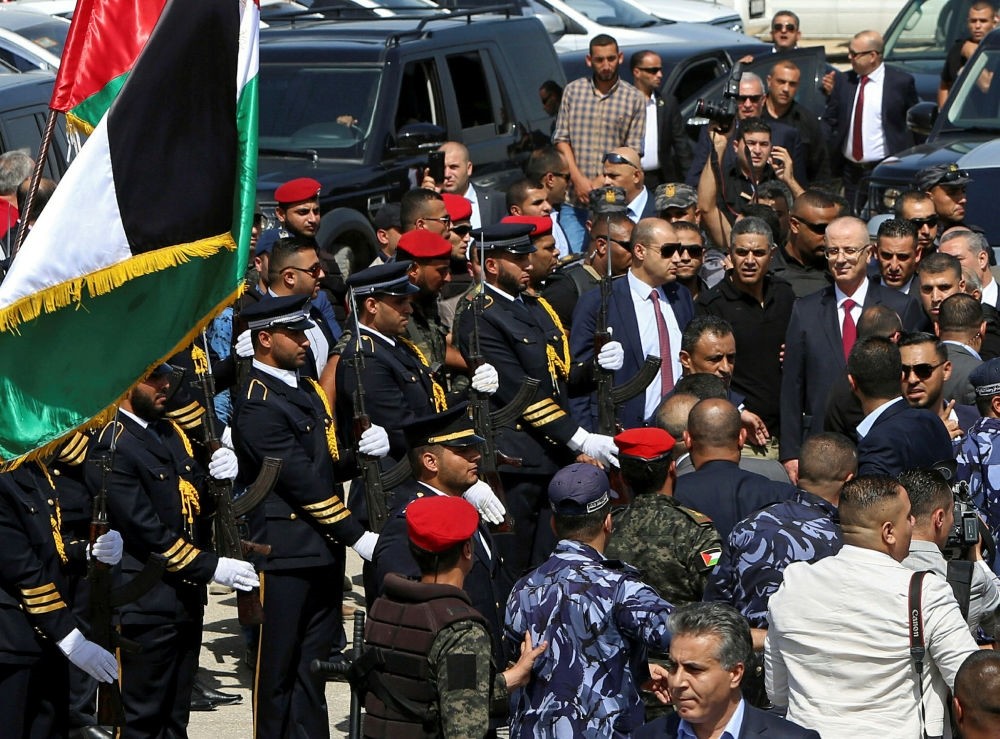 Palestinian Prime Minister Rami Hamdallah reviews an honor guard on his arrival to the Palestinian side of the Beit Hanoun border crossing in the northern Gaza Strip, Oct. 2.
by Compiled from Wire Services Oct 03, 2017 12:00 am

After multiple failed reconciliation attempts, Palestinian Prime Minister Hamdallah arrived in Gaza for his first visit in two years, the first significant step in a transfer of power from Hamas to the Palestinian Authority

The West Bank-based Palestinian prime minister crossed into the Gaza Strip yesterday in a move toward reconciliation between Hamas and mainstream Fatah, as rival factions seek to overcome a decade of crippling divisions.

Palestinian Prime Minister Rami Hamdallah drove through the Erez crossing yesterday, heading a large delegation of Fatah officials from the West Bank in attempts to end a 10-year rift with Gaza's Hamas rulers.

Hamas announced last week that it was handing over administrative control of the Gaza Strip to a unity government headed by Hamdallah, but the movement's armed wing remains the dominant power in the Palestinian enclave of 2 million people.

"We return to Gaza in order to conclude reconciliation and [for] national unity and to end the painful impacts of divisions and to rebuild Gaza brick by brick," Hamdallah said at a welcoming ceremony.

Forces loyal to Palestinian President Mahmoud Abbas lost control of Gaza in fighting with Hamas in 2007.

Hamas's reversal was the most significant step toward Palestinian unity since the government was formed in 2014. It failed to function in Gaza, where Israel and Hamas have fought three wars since 2008, because of disputes between Hamas and Fatah over its responsibilities.

Analysts said narrowing internal divisions could help Western-backed Abbas counter Israel's argument that it has no negotiating partner for peace with Palestinians.

"We came with instructions from Abbas to tell the world from the heart of Gaza that the Palestinian state cannot and will not be established without geographical and political unity between Gaza and the West Bank," Hamdallah said.

A Hamas police honor guard and hundreds of Palestinians, many of them waving Palestinian flags, waited for Hamdallah outside the Hamas-controlled checkpoint, down the road from Israel's Erez border crossing through which the prime minister and his motorcade passed.

Hamdallah, accompanied by a security detail from the West Bank-based Palestinian Authority and Hamas forces, was scheduled to hold talks with Hamas leader Ismail Haniyeh and tour Shejaia, a neighborhood heavily damaged by Israeli airstrikes in a 2014 war with Gaza militants.

"The agenda is crowded with ideas and projects," Culture Minister Ehad Bseisso said. "We need to ... push the wheel of reconciliation forward to create a positive atmosphere."

In addition to setting a date for holding presidential and parliamentary elections, rival factions will have to resolve the issue of the future of the 40,000 to 50,000 civil and military staff Hamas had hired since 2007.

After distancing itself from the Muslim Brotherhood by changing its administrative cadre, Hamas unveiled a new political charter in May amid structural changes. In its new program, Hamas redefines itself as a national liberation group, distancing it from its parent movement, the pan-Arab Muslim Brotherhood, which has been outlawed by neighboring Egypt.

Ahmad Yusuf, a senior Hamas leader considered one the organization's pragmatists, said the new document signaled "an important shift in the way Hamas is thinking" that will give it more flexibility internationally.

Hamas recently moved to secure its position in the region by making a significant change to its administrative cadre while accepting collaborative efforts with Egypt to fight the presence of Daesh on the Sinai Peninsula.

After declaring itself an entirely independent organization with no affiliation to any parent organization such as the Muslim Brotherhood, Hamas stated its intentions to mend ties with Cairo, as they both suffer from the presence of radical movements.

Hamas has ruled Gaza since 2007, after securing an overwhelming victory in legislative elections the previous year and ending 40 years of political domination by rival Fatah. Hamas captured the coastal strip by violently overthrowing forces loyal to Fatah, led by Abbas.