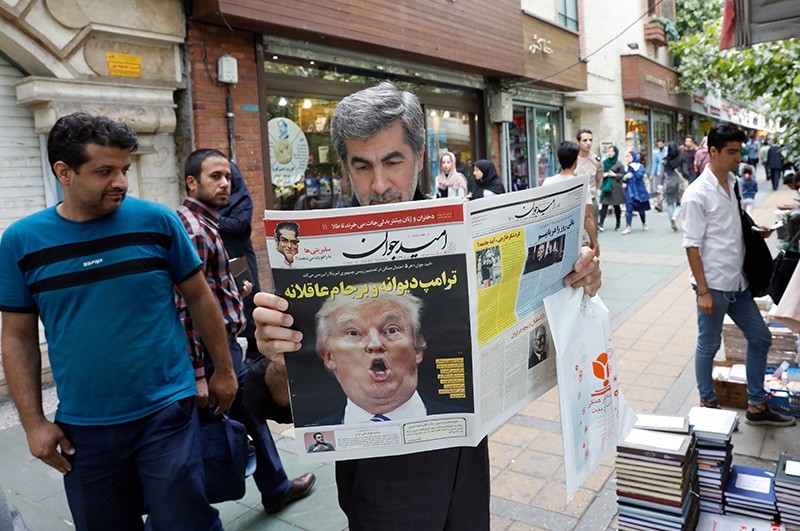 An Iranian man reads a copy of Iranian daily newspaper 'Arman' with a picture of US President Donald Trump on its front page with the title in Persian that reads 'Crazy Trump and logical JCPOA' on display in Tehran, Iran, 14 October 2017. (EPA Photo)
by Oct 14, 2017 12:00 am

Iranians responded with anger and mockery on Saturday to the bellicose criticism of their government by U.S. President Donald Trump who threatened to tear up the landmark nuclear deal.

Trump's use of the phrase "Arabian Gulf" rather than "Persian Gulf" particularly hit a nerve in a country with a fierce nationalistic streak.

"Everyone knew Trump's friendship was for sale to the highest bidder. We now know that his geography is too," wrote Foreign Minister Mohammad Javad Zarif on Twitter, referring to the U.S. alliance with Iran's regional rival Saudi Arabia.

Despite pressure from the Arab Gulf monarchies, most international bodies still use "Persian Gulf" as the conventional name for the region's waterway, and many Iranians shared photos of U.S. veterans' medals and graves referring to the "Persian Gulf conflict" of the 1990s.

In his White House speech on Friday, Trump reeled off a list of grievances committed by the "Iranian dictatorship, its sponsorship of terrorism, and its continuing aggression in the Middle East and all around the world."

He threatened to "terminate" the 2015 nuclear deal signed between Iran and six world powers unless Congress passed stringent new sanctions.

But as Iranians headed to their offices on Saturday -- the first day of the work week in Iran -- the reaction was often one of bemusement.

"Trump's statements are so ridiculous that it actually works in Iran's favor. Speaking about the 'Arabian Gulf' is taken very badly by people here," said Abbas, a 40-year-old banker who only gave his first name.

"The reaction of the Europeans shows that the United States is isolated, and only Saudi Arabia and Israel have supported Trump," he added.

The other signatories to the nuclear deal -- Britain, France, Germany, China and Russia -- have called for its preservation, saying that Iran is clearly sticking to its commitments.

Trump's efforts to reach out to ordinary Iranians, who he referred to as the "longest-suffering victims" of the Islamic regime, also appeared to have fallen on deaf ears, with many recalling the travel ban he slapped on them earlier this year.

His Instagram page was inundated by more than a million comments, mostly from jeering Iranians.

"I was so angry last night. This person hates Iran so much that even if we don't support the ideas of the regime, we find ourselves supporting them and the Revolutionary Guards," said Layla, 42, in her Tehran artisan shop.

"Trump stopped Iranians going to the U.S. How can he say he's on our side?" she added.

For all the bluster, Trump's strategy was not as tough as many had predicted.

It placed new sanctions on Iran's Revolutionary Guards, but did not designate them a foreign terrorist organization as trailed in the run-up to the speech.

The hardline Kayhan newspaper spun this as a victory, saying Trump had not "dared" to do so after the Guards warned the U.S. would have to move its regional bases out of reach of Iranian missiles.

President Hassan Rouhani had pushed back against the Revolutionary Guards' deep involvement in the economy after winning re-election earlier this year.

But Trump's threats have brought a new solidarity among Iran's often fractious institutions.

"We have dissatisfactions, for example there are economic problems," said Bahram Siavoshi, 36, as he walked to work at a private finance firm in Tehran.

"But if it comes to it, we will stand together to the end, and will defend even the Guards. Their efforts cannot be ignored. If it wasn't for them we would be like Syria or Yemen."

Rouhani took to the airwaves shortly after Trump's speech on Friday night, dismissing it as "nothing but the repetition of baseless accusations and swear words".

Nonetheless, the deal's future hangs in the balance as the U.S. Congress has 60 days to decide how to tighten sanctions, or possibly introduce new red lines that would trigger a U.S. response.

"If the Congress goes ahead with new sanctions, then the deal is dead and Iran will restart its nuclear program and move forward full-steam ahead in all fields," Mohammad Marandi, a professor at the University of Tehran, told AFP.

"Iran will probably invest even more than before in order to show the Americans that they can't get away with destroying the agreement."