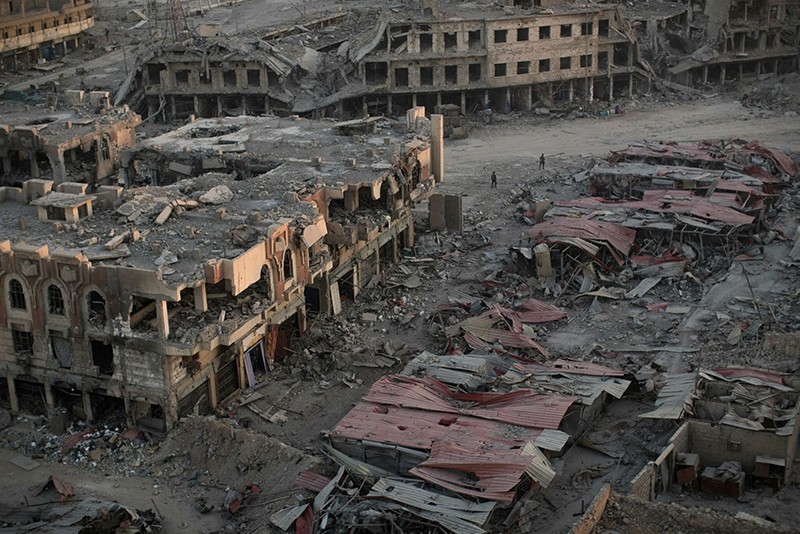 In this July 11, 2017 photo, people walk through a damaged neighborhood as the sun sets on the west side of Mosul, Iraq. (AP Photo)
by Oct 15, 2017 12:00 am
Nearly 700,000 Iraqis from the former terrorist stronghold of Mosul and nearby areas are still displaced despite the city's recapture in July, the Norwegian Refugee Council said Sunday.

"One year since the start of the battle to retake Mosul from the [Daesh], some 673,000 Iraqis from the city and its surroundings remain displaced and unable to go back to their destroyed neighborhoods," it said.

"More than half of them may have lost their official civil documents – from birth certificates to property deeds – which will make rebuilding their lives even harder," added the humanitarian group, which operates in Iraq.

Mosul was seized by the Daesh terrorists in 2014 during an offensive that saw them take control of large parts of Iraq and neighboring Syria.

The nine-month offensive to recapture Iraq's second city left many neighborhoods in ruins.

"The battle of Mosul is over, but for hundreds of thousands who fled the city, their suffering and despair continues," said the NRC's Iraq country director Heidi Diedrich.

"People we work with are still missing some of the most basic necessities and have no idea if they will ever be able to go back to their homes."

She called on the international community "to stand in solidarity" with the displaced Iraqis and for the government to ensure their rights "are at the forefront" of reconstruction efforts.