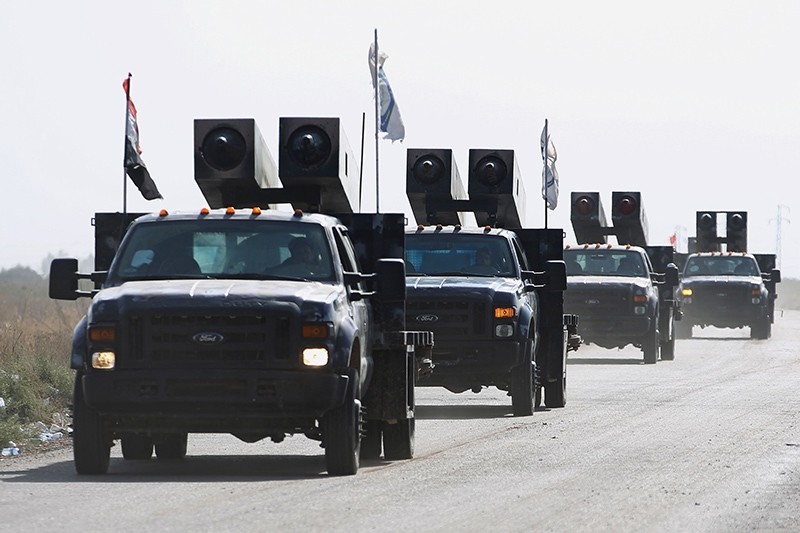 Thousands of Iraqi troops were locked in an armed standoff with Kurdish peshmerga forces in the disputed oil-rich province of Kirkuk as Washington scrambled to avert fighting between its allies in the war against Daesh terrorist group.

The peshmerga said Saturday that Baghdad had set a deadline for their forces to surrender positions they took during the fightback against the terrorists over the past three years.

The deadline, originally set for 2:00 am Sunday, was extended by 24 hours during a meeting overnight, a Kurdish official said early Sunday, asking not to be named.

On Saturday, armored vehicles bearing the Iraqi national flag were posted on the bank of a river on the southern outskirts of the city of Kirkuk, an French Press Agency (AFP) photographer reported.

On the opposite bank, peshmerga fighters were visible behind an earthen embankment topped with concrete blocks and the red, white, green and yellow colors of the Kurdish flag.

"Our forces are not moving and are now waiting for orders from the general staff," an Iraqi army officer told AFP, asking not to be identified.

Just before midnight (2100 GMT) Iraqi forces used loudhailers to call on the peshmerga fighters to withdraw.

Early on Monday, Iraqi and KRG officials said that Iraqi forces have started to advance towards the disputed city.

The standoff came as Iraqi President Fuad Masum, who is himself a Kurd, held crisis talks in the Kurdish city of Sulaimaniyah.

The peshmerga rejected a warning from an Iraqi paramilitary force to withdraw from Kirkuk.

Kirkuk's former governor, a Kurd sacked by Baghdad but who refuses to quit his post, visited the peshmerga near the Bay Hassan and Havana oilfields with an uncomprising message for the Iraqi forces.

"The demands of the Hashed al-Shaabi (paramilitary forces) to evacuate Kirkuk and hand over control of the territory, its inhabitants and natural resources are totally unacceptable," Najm Eddine Karim told journalists at the scene.

The position controls the access to an airbase and some of the oilfields located in the region of Kirkuk, the official said. The city and its immediate surroundings, including the oilfields, are under Kurdish control.

There were no clashes reported about an hour after the deadline, but a resident said dozens of young Kurds deployed around Kirkuk with machine guns as the news of the warning spread.

Karim said the Kurds were in contact with the U.S.-led international coalition against Daesh, which could observe the situation on the ground with its military overflights.

Iranian Major General Qassem Soleimani has arrived in Iraq's Kurdistan region for talks about the escalating crisis between the KRG and the Iraqi government following the illegitimate independence referendum, a Kurdish official said Sunday.

The two sides have been at loggerheads since the Kurds voted overwhelmingly for independence in a September 25 referendum that Baghdad rejected as illegal.

Polling was held not only in the three provinces of the KRG but also in adjacent areas, including Kirkuk, that are claimed by both Baghdad and Iraqi Kurdistan.

Iraqi Prime Minister Haider al-Abadi has said there can be no further discussion of the KRG's long-standing demands to incorporate Kirkuk and othern areas in their autonomous region until the independence vote is annulled.

He insisted on Thursday that he was "not going... to make war on our Kurdish citizens".

But thousands of heavily armed troops and members of the Hashed al-Shaabi, or Popular Mobilization forces, which are dominated by Iran-backed Shiite militias – have massed around Kirkuk.

They have already retaken a string of positions to the south of the city after peshmerga forces withdrew.

The Kurds have deployed thousands of peshmerga fighters to the area around Kirkuk itself and have vowed to defend the city "at any cost".

A peshmerga commander on the western front said Kurdish fighters had "taken all the necessary measures" and were "ready for a confrontation" if necessary.

If "the other side makes the mistake of advancing, we'll give them a lesson they won't forget in a hurry", Kamal Kirkuki said.

The June 2014 lines are those that the Kurds held before Daesh terrorists swept through vast areas north and west of Baghdad, prompting Iraqi federal units to disintegrate and Kurdish forces to step in.

The Kurds control the city of Kirkuk and three major oil fields in the province that account for a significant share of the regional government's oil revenues.

Washington has military advisers deployed with both sides in the standoff and Defense Secretary Jim Mattis said on Friday the United States was working to reduce tensions.

"We are trying to tone everything down and to figure out how we go forward without losing sight of the enemy," Mattis told reporters.

"Everybody stay focused on defeating ISIS. We can't turn on each other right now," he added, using an acronym for Daesh.