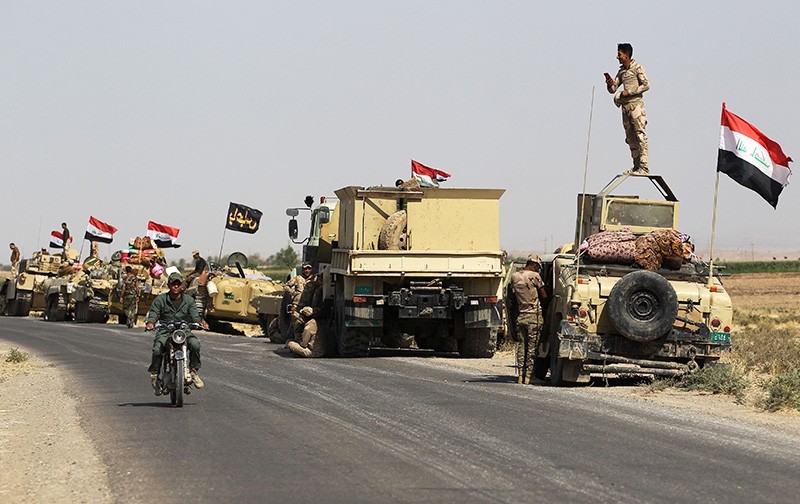 Iraqi forces rest on the road as they drive towards Kurdish peshmerga positions on October 15, 2017, on the southern outskirts of Kirkuk. (AFP Photo)
by Compiled from Wire Services Oct 16, 2017 12:00 am

Officials from the Kurdistan Regional Government (KRG) said early Monday that federal forces and state-backed militias have launched a "major, multi-pronged" attack aimed at retaking the disputed northern city of Kirkuk, causing "lots of casualties" in fighting south of the city.

Iraqi Prime Minister Haider al-Abadi gave instructions that the Iraqi flag be hoisted on Kirkuk and other territories claimed by both the Iraqi government and the KRG.

Eariler, a convoy of elite Iraqi military forces took control of the governorate building in central Kirkuk on Monday, meeting no opposition from Kurdish forces deployed in the city, security sources and residents said.

A dozen Humvees from the U.S.-trained Counter Terrorism Service (CTS) arrived at the governorate building and took position in the vicinity alongside the local city police, they said. They drove to the center of the city from airport which they had captured earlier in the day from Kurdish forces.

Iraqi military said in a statement that the Kirkuk International Airport, located right outside the city's western outskirts, was captured from KRG's peshmerga forces.

In previous statements, KRG officials acknowledged a general retreat from disputed positions south of the city, but vowed to defend the airport.

"We are not withdrawing from here, we are fortifying our positions at the airport and we intend to fight here," Maj. Gen. Ayoub Yusuf Said told The Associated Press. He says his forces have been battling since early Monday and have suffered casualties, without elaborating.

Hundreds of armed Kurdish residents were taking up positions inside the city anticipating an attack.

Residents of the multi-ethnic city, home to some 1 million Arabs, Kurds, Turkmen and Christians, stayed inside and reported hearing sporadic booms they said sounded like shelling and rocket fire.

The Kurdistan Region Security Council said in a statement that the peshmerga have destroyed at least five U.S.-supplied Humvees being used by the state-sanctioned militias following the "unprovoked attack" south of the city.

Brig. Gen. Bahzad Ahmed, a spokesman for KRG forces, said federal forces have seized an oil and gas company and other industrial areas south of Kirkuk in fighting with KRG forces that caused "lots of casualties," without providing a specific figure.

He said Iraqi forces have "burnt lots of houses and killed many people" in Toz Khormato and Daquq, south of the disputed city. His claims could not be independently verified.

Iraq's Interior Ministry said in a brief statement that federal forces have taken control of a power plant, a police station and industrial areas near Kirkuk. It provided no further details on the fighting or casualties in what it referred to as Operation Impose Security on Kirkuk.

Tensions have soared since the Kurds held a non-binding referendum last month in which they voted for independence from Iraq. The central government, along with neighboring Turkey and Iran, rejected the vote.

The United States has supplied and trained Iraqi federal forces and the peshmerga, both of which are fighting the Daesh group. The U.S. also opposed the referendum, and has urged both sides to remain focused on defeating the extremists.

U.S. Army Col. Ryan Dillon, a spokesman for the U.S.-led coalition, tweeted that it was "closely monitoring sit. near Kirkuk; urge all sides to avoid escalatory actions. Finish the fight vs. #ISIS, biggest threat to all." ISIS is another acronym for the Daesh group.

The central government and the autonomous Kurdish region in the north have long been divided over oil revenues and the fate of disputed territories like Kirkuk that are controlled by Kurdish forces but are outside their self-ruled region.

The KRG assumed control of Kirkuk, in the heart of a major oil-producing region, in the summer of 2014, when Daesh militants swept across northern Iraq and the country's armed forces crumbled.

Iraq has since rebuilt its armed forces with considerable U.S. aid, and they are battle-hardened and flush with victory after driving Daesh from most of the territory it once held.The Kurdish security council said the assault launched late Sunday was aimed at entering the city and retaking the K-1 military base and nearby oil fields.

State-run Al-Iraqiya TV had earlier reported that federal forces rolled into parts of the countryside outside Kirkuk without facing resistance. However, some residents of the city and an Iraqi militia commander reported shelling.

Al-Iraqiya carried a statement from Abadi's office saying he had ordered federal forces to "impose security in the city in cooperation with the inhabitants and the peshmerga," indicating he was willing to share administration.

A commander of the local Kurdish police force said his forces remained in control of the province's disputed oil wells. "There's been no agreement to hand over the wells until now. As for the future, I don't know," said Bahja Ahmad Amin.

Iraq's state-sanctioned militias, the mostly Shiite Arab Popular Mobilization Forces (Hashd al-Shaabi), were ordered to stay out of the city, according to al-Abadi's office, and instead keep positions in the countryside. They are viewed with deep suspicion by Kurdish residents, who see them as beholden to Iran rather than Iraq's central government. The predominantly Shiite militias are sponsored and guided by Tehran.

Ercuman Turkman, a PMF commander, said shortly before forces began moving in that he expected orders to move on Kirkuk's oil wells, its airport and the nearby K-1 military base, but not the city. Haytham Hashem, another PMF commander, reported shelling on his position in Toz Khormato, 10 kilometers (6 miles) from the edge of Kirkuk city.

Baghdad has been turning the screws on the Kurdish region since the September referendum, pushing KRG leaders to disavow the vote and accept shared administration over Kirkuk.

Iraq's government barred international flights to and from the region and asked neighboring Turkey and Iran to close their borders. Iran closed its three official crossings with the Kurdish region Sunday, Kurdish media reported. It also froze currency transfers to four banks operating in the Kurdish region.

Al-Abadi has demanded shared administration over Kirkuk. His Cabinet said Sunday that fighters from the PKK terrorist group were beginning to appear in Kirkuk, and declared that would be tantamount to an act of war.

Long claimed by the Kurds as part of their historic territory, the province has emerged as the main flashpoint in the dispute.

Polling during the referendum was held not only in the three provinces of the autonomous KRG but also in adjacent KRG-held areas, including Kirkuk, that are claimed by both Baghdad and KRG.

The KRG controls the city of Kirkuk and three major oil fields in the province that produce some 250,000 barrels per day, accounting for 40 percent of KRG's oil exports.

The fields would provide crucial revenue to Baghdad, which has been left cash-strapped from the global fall in oil prices and three years of battle against Daesh.